What's next for the likes of Equinox, New York Sports Club, and Gold's Gym? 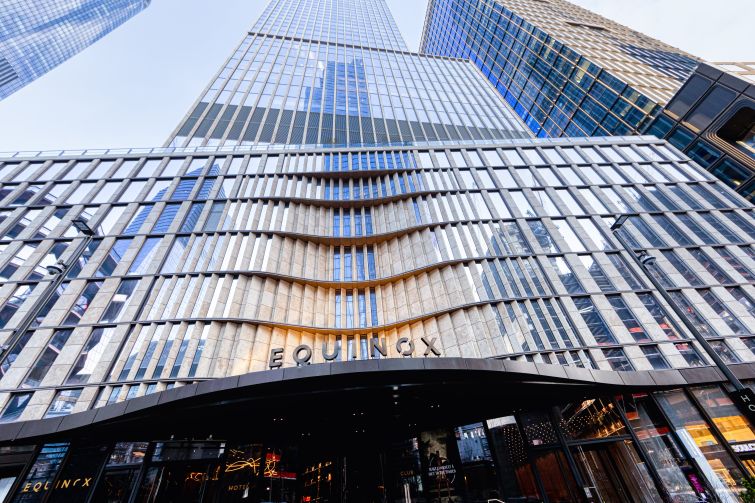 As things stand right now, nobody particularly wants to perspire next to a complete stranger who’s also sweating, making the fitness business chancy at best.

On the other hand, gyms and fitness centers are an amenity that is seen as crucial to returning New York and other cities to their commanding pre-coronavirus status.

“People are desperate to get back to the gym,” said Ruth Colp-Haber, president and CEO of Wharton Property Advisors, a boutique tenant representation firm. She called gyms the “sine qua non” of office amenities (in other words, quite essential).

A few New York City buildings — almost enough to make a trend — have made it their business to provide a place to sweat for their workers. For example, Dock 72, a new waterfront office building at the Brooklyn Navy Yard that coworking pioneer WeWork anchors, has a basketball court between the building and the water, and is ready to open a full-service fitness center.

At 787 11th Avenue, an old-time car dealership turned largely office building, primary owner the Georgetown Company offers a membership option for a health club across the street, according to the building’s website, and there’s a tennis court on its roof. And Boston Properties, which co-developed Dock 72 with Rudin Management, is building a fitness center in its iconic General Motors Building.

“There has definitely been some,” Rose Levy, a spokeswoman for Procore Technologies, a Carpinteria, Calif.-based construction management software provider, said of office gyms. “[It’s] just not clear on the volume yet.’’

COVID, which has stripped most central business districts of workers and, thereby, potential fitness clientele, has made it difficult to get a handle on whether it’s a trend or not, Levy said.

Of course, after a 401(k) and health insurance, many employers find that employees want gym memberships, which they happily provide in the belief that a healthy and fit staff member is a better staff member.

Developers of office buildings in New York and elsewhere have yet to decide whether they want to take on Big Fitness — the New York Sports Clubs, Equinoxes and Gold’s Gyms of the world. They have become such a well-established part of the landscape that “hitting the gym” before or after work has become something of a tradition.

And gyms became a favored use — before COVID — of landlords trying to backfill suburban mall stores lost to e-commerce and other victims of the cutthroat retail trade, replacing popular, but financially troubled, brands like Toys “R” Us and Sears. During the retail contractions in 2018 and 2019, they were seen as a very safe bet; gyms were a retailer that couldn’t fall victim to e-commerce.

Things are going less than wonderfully in the health club business and it’s all largely due to the pandemic. There’s even a question now as to whether such clubs will join department stores and apparel stores in the so-called retail apocalypse. In an early January issue, the magazine Fast Company had an article entitled, “Gyms aren’t coming back. Here’s how you’ll work out in the future.”

Health clubs were in growth mode until the pandemic hit. According to the International Health, Racquet & Sportsclub Association, there were 905 sports clubs in New York City in 2020, pre-COVID. It doesn’t have an exact count for 2015, but it says the number then was between 800 and 850, said Kaitlynn Anderson Fernandez, an association spokeswoman.

Since the virus came to stay last March, revenue at health clubs nationwide declined 58 percent, and some 17 percent of health and fitness clubs closed for good, according to an IHRSA report. Anderson Fernandez said the association doesn’t have New York City or New York state figures, but she said it believes both “will be worse” than the national averages when the research is complete. That’s because the city has been under severe restrictions for a longer time than the rest of the country.

Attempts to obtain comments from Equinox and New York Sports Club parent Town Sports International Holdings, which each run dozens of gyms in the city, were unsuccessful.

“Restructuring is the best way to properly respond to the COVID-19 pandemic,” the company said in a statement on its website.

And Equinox was said to be in discussions with legal and financial advisers to help it cope with pressures brought about by the pandemic, according to Bloomberg Law. Equinox also operates SoulCycle and Blink Fitness. Some principals of Related Companies, the main builders of Hudson Yards, are investors in Equinox.

At that $25 billion Hudson Yards development, which includes four high-rise office towers, fitness was built into the complex, said Philippe Visser, president of Related Office Development, which oversees Hudson Yards and other office properties Related owns or manages throughout the United States.

“Even before this pandemic, we’ve always been laser-focused on the importance of fitness and wellness in a 24/7 office environment,” Visser said. “We see it as a critical component to attracting top talent. We didn’t have a pandemic in mind when we planned all this originally, but all of those aspects help to future-proof Hudson Yards.”

Hudson Yards, like other properties throughout New York and its environs, has been dealing with COVID restrictions that have left it severely underpopulated and in need of ways to restore its vitality once those restrictions are eased.

The Equinox at Hudson Yards is 60,000 square feet, the size of a large supermarket, with an outdoor pool deck, a SoulCycle studio, a spa and an outdoor juice bar. In addition, there were yoga classes on the plaza and on the Edge, the outdoor observation deck — what Visser called “a comprehensive suite of offerings.” Those offerings include a partnership with Mount Sinai Hospital, providing medical care in the neighborhood.

Some experts say that just as folks learned to work from home due to the COVID-related lockdowns, they’ve also learned to work out at home. Going forward, once the pandemic has passed, the health clubs that survive will be the ones like the Equinox at Hudson Yards that do more than provide equipment to get or stay fit, but also provide a community, a social element to go along with the exercise.

John Powers, an executive vice president who oversees the New York region for Boston Properties, said he is expecting the fitness and wellness aspects of Dock 72 will be part of its comeback story. The new waterfront office building at the notoriously hard-to-get-to Brooklyn Navy Yard has been hit with a double whammy: COVID and the restrictions on movement due to the virus and its construction in cooperation with WeWork, which has struggled since a botched initial public offering in 2019, and which has had trouble filling space due to the pandemic restrictions.

Boston Properties last month announced it was taking a $60 million, non-cash impairment charge on Dock 72, due to slow leasing that the real estate investment trust blamed in part on the pandemic.

Boston Properties has had a fitness center at 510 Madison Avenue for a decade, according to Powers. At 601 Lexington Avenue, the tower formerly known as Citigroup Center, a 24 Hour Fitness went bankrupt and the REIT is in discussion with two replacement operators. At the GM Building, the company plans to construct a fitness center, Powers said.

Based on worker card swipes on the electronic turnstiles everyone has to pass through, he said the company estimates that Boston Properties’ New York towers are about 13 percent occupied. Normally, those buildings would be fully occupied, he said.