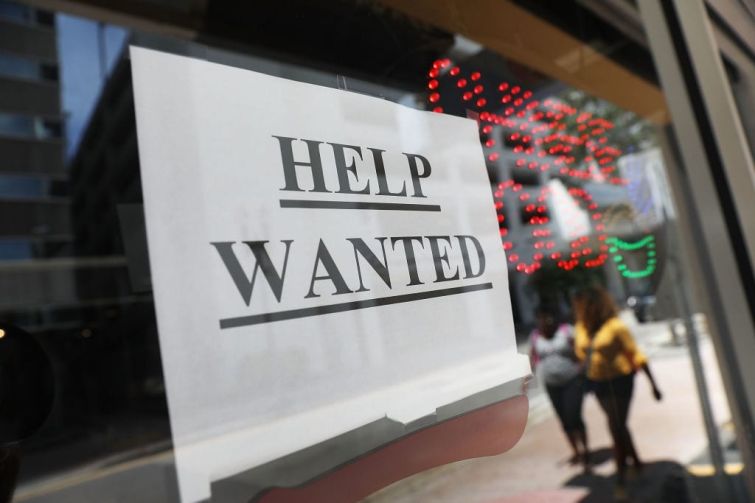 A "help wanted" sign hangs on a window of a restaurant. Photo: Joe Raedle/Getty Images

New York State added 41,300 private-sector jobs in October as the unemployment rate trickled down slightly to 6.9 percent from 7.1 percent, according to data from the New York State Department of Labor released on Thursday.

The jobs added in October represent just a 0.5 percent increase for the entire state. While that uptick matched the national average, New York’s unemployment rate stills ranks well above the national rate of 4.6 percent. And New York City’s unemployment rate was an even higher 9.4 percent in October. But any improvement is improvement, said Elena Volovelsky, a labor market analyst for the Labor Department.

“If you look at the number of unemployed, that declined for nine consecutive months,” Volovelsky told Commercial Observer. “The situation is definitely getting better.”

New York has been clawing its way back from the massive job losses seen in the early days of the pandemic where the state lost more than 2 million jobs in March 2020. The unemployment rate in New York City alone reached a record high of 17.9 percent in the second quarter of 2020, meaning almost one in five people did not have a job.

The leisure and hospitality industries suffered the most year-to-year job loss in New York City, with a 53.1 percent decline between March 2020 and March 2021. But as coronavirus restrictions have eased, the hospitality industry has brought back some jobs.

“We’ve just seen large hotels beginning to reopen, so some of those jobs probably have to do with [those and] other signs of normalcy that returned in October,” Volovelsky said. “Obviously, that sector is still lagging [behind] the recovery for the rest of the city.”

The number of jobs in the leisure and hospitality sectors in October still was about 30 percent below pre-pandemic levels, Volovelsky said.  However, those industries saw the highest year-over-year job gains last month, with 121,400 jobs added between October 2020 and this October — a nearly 20 percent increase, according to the Department of Labor report. Information sector jobs had the second-highest growth of any industry at 6.9 percent, or 18,4000 jobs, in the same time period.

Construction saw the greatest number of job losses, 10,900 jobs, or a 2.8 percent drop from last October to this October. That industry may have seen a decline because construction jobs were unnaturally inflated last year, as city residents built out their home offices while stuck working from home, Volovelsky said.

But New York is still lagging behind the nation in terms of job gains in the past 12 months. While the nation saw the number of jobs increase 5.1 percent year-over-year this October, New York only saw a 4.2 percent increase.