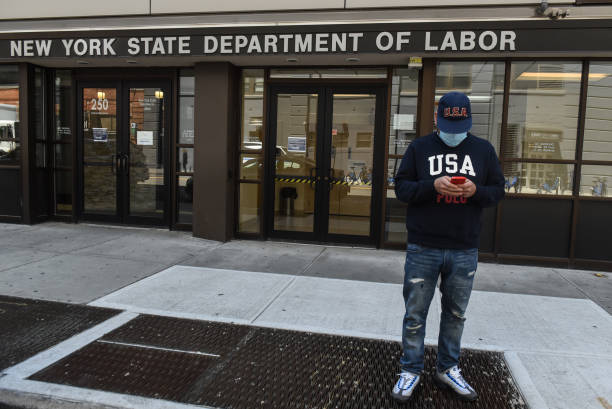 Employment rates across New York City have declined over the past year. Photo: Stephanie Keith/Getty Images

The leisure and hospitality industry may have seen nationwide employment improvements this spring, but it’s still reeling from the pandemic.

Leisure and hospitality bore the biggest brunt of year-to-year job loss in New York City, with a 53.1 percent decline between March 2020 and March 2021, according to a new report issued by U.S. Bureau of Labor Statistics. This decline is largely attributed to the pandemic, which has left the industry trailing the furthest behind.

Manufacturing and trade, transportation and utilities followed in year-to-year loss, with a respective 27 and 22.1 percent decline. These trends account for losses in all five boroughs — each of which has shown similar patterns across the board.

Manhattan endured the most significant dropoff in employment rates, with a 14.7 percent decrease. Staten Island’s employment loss, the smallest of the boroughs population-wise, still rounded off at a 5.5 percent loss.

Looking beyond the boroughs, the national employment decline followed a similar, but lower, trend at an average of 4.5 percent which was common across the country, as 324 of 343 of America’s largest U.S. counties reported decreases over the year.

Yet while the numbers show a steady decline across the board, micro-improvements have been made. New York City has been creeping steadily toward recovery, and the first quarter findings reveal an increase in the average weekly wage.

For all five boroughs, the average weekly wage rose over the year, with Manhattan revealing a 21 percent rise — the third highest among the 343 largest counties in the country. Queens had the smallest shift in New York City with a 3.2 percent increase, still marking an improvement from last year.

Even the hospitality industry is fighting its way back. In May, the hospitality and leisure industry made strides with an addition of 292,000 jobs nationwide. Yet as the city rides the wave of a post-pandemic summer, there’s still a long way to go.