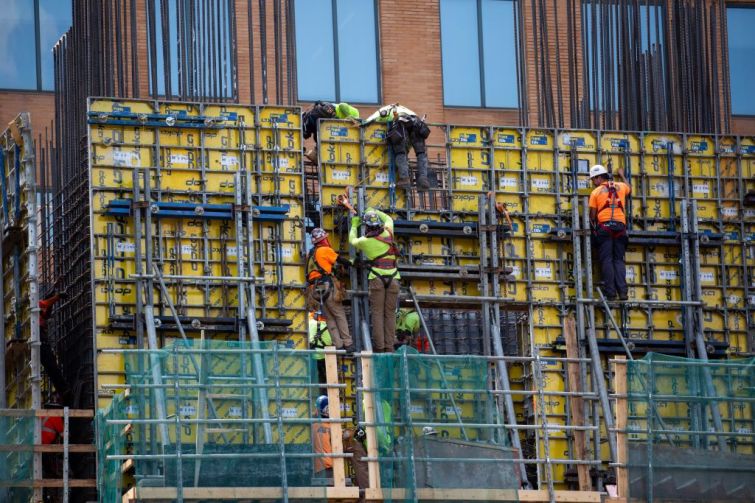 New York has started to return to pre-pandemic levels of permits for new buildings, but the size of the projects still remain smaller. Photo: Michael Nagle/Xinhua via Getty Images

The number of permits filed to build new buildings around New York City has returned to near pre-pandemic levels, but the total size of projects still remains significantly lower than before COVID, according to a report from the Real Estate Board of New York (REBNY).

However, the size of the projects is still a long way off from pre-pandemic figures. The third quarter saw 8.12 million square feet of proposed new buildings — below the 11.2 million-square-foot historical average — with only two of the developments set to be more than 300,000 square feet, the report found.

“Getting more large-scale construction off the ground will be vital for New York City’s economic recovery, and we are looking forward to seeing new federal infrastructure funding distributed to support major projects as quickly as possible,” Louis Coletti, the president and CEO of the Building Trades Employers Association, said about the REBNY report.

The number of filings for apartment units also crept up in the third quarter, increasing by 20 percent year over year to 6,187, but housing production still remains below what the city needs to support its growing population, the REBNY reported.

The construction industry was dealt a major blow by the pandemic, as emergency measures to stop the spread of COVID-19 forced all nonessential construction to pause for months in 2020. Construction employment is expected to remain at its lowest levels since 2014 for the duration of 2021, while spending is expected to drop by $1.5 billion over the next three years, a recent report from the New York Building Congress predicted.

Both the Building Congress and REBNY have both said that the recently passed federal infrastructure bill provides hope for the construction industry as it will fund bridge, road, transit and airport projects around the city.

“As we can see from this report, the new federal infrastructure legislation will provide a critical boost to New York’s recovery,” REBNY president James Whelan said in a statement. “Investment in infrastructure is key to our long-term economic success.”