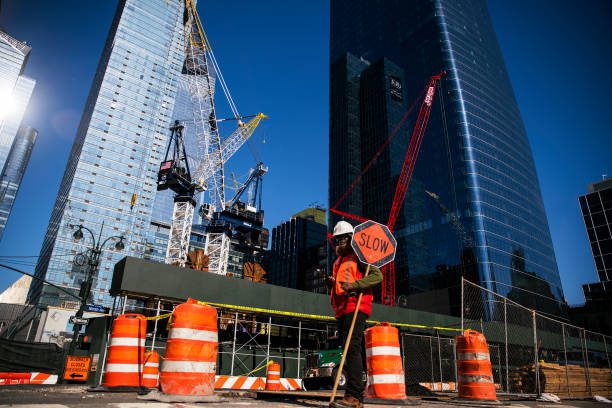 Construction employment will remain at its lowest point since 2014 for the duration of 2021, with spending expected to drop by $1.5 billion over the next three years, a report from the New York Building Congress predicts.

The report published Thursday, which forecasts trends in the construction and building industry over the next three years, claims construction spending will amount to $174.1 billion by 2023, a $1.5 billion decrease compared with the period from 2017 to 2019. As New York City struggles to get back on its feet, such recovery metrics will remain slow-changing.

After non-essential construction shut down for nearly three months in 2020, the number of new buildings dramatically declined. In 2019, total floor space built peaked at 103.3 million gross square feet, but now, even as the industry creeps toward recovery, the Building Congress estimates that this year will remain significantly behind pre-pandemic levels at 74.2 million gross square feet.

The report’s forecast for floor space built over the next two years is even worse, with growth expected to drop to 67 million gross square feet in 2022 and 61.3 million by 2023.

While this drop-off isn’t entirely abnormal — the report posits that annually built gross square feet still falls in the same range as from 2015 to 2020 — these numbers reflect the widespread impact of the pandemic on all aspects of the industry, many of which face similarly abysmal projections.

The report broke spending predictions into multiple categories. Over the next three years, overall spending is projected to amount to $174.1 billion, which, adjusted for inflation, shows a more dismal $38.2 billion drop-off compared with spending between 2017 and 2019.

Meanwhile, government spending in construction, while up from 2020, is set to steadily decline by 2023. According to the report, this year could amass $23.1 billion, whereas 2023 is slated for $21.1 billion. If adjusting for inflation, current public investments are receding lower than Great Recession levels, displaying an imminent need for government aid, officials said.

“No matter what you throw at New York City, we are able to withstand it and come back stronger,” Cheryl McKissack Daniel, chair of the New York Building Foundation and president and CEO of McKissack & McKissack, said in a statement. “This should underscore why we need more investment in our infrastructure, as it is one of the best ways to improve our society.”

The report’s projections don’t account for the federal infrastructure bill currently debated in the U.S. House of Representatives. If that bill, allocating $1.2 trillion in infrastructure, were to come to fruition, it would cause a boom in economic activity — to a predicted tune of $19 billion.

Without taking that bill into consideration, however, the report says that this year will see a 21 percent improvement in residential construction spending compared with last year. By 2023, such spending could amount to $36.6 billion. While a step in the right direction, this forecast remains 33 percent lower than spending between 2017 and 2019.

Non-residential construction spending is slated to fluctuate, starting at $23.7 billion this year before dropping to $22.2 billion in 2022 — only to rise again to $25 billion the following year.

Yet although these statistics look bleak, the Building Congress remains optimistic about the future, predicting a construction resurgence within the next few years.

“Despite the economic impact that COVID-19 has had on New York City since the start of the pandemic, the building industry proves its strength time and time again, as spending and job creation continue on an upward trend from 2020,” Carlo Scissura, president and CEO of the Building Congress, said in a statement. “With a long road to economic recovery ahead, the ever-present threats of climate change and infrastructure that’s crumbling, we need meaningful, immediate support from Washington.”

As New York City begins to bounce back, the building industry could invest $60.6 billion into construction, per the report. The pandemic battered industries throughout the city, so the revitalization of construction, however erratic, has the potential to alleviate some of the economic aftermath; the report predicts that this year will add 135,000 construction jobs to the economy, 140,222 potentially in 2022 and 157,100 in 2023.