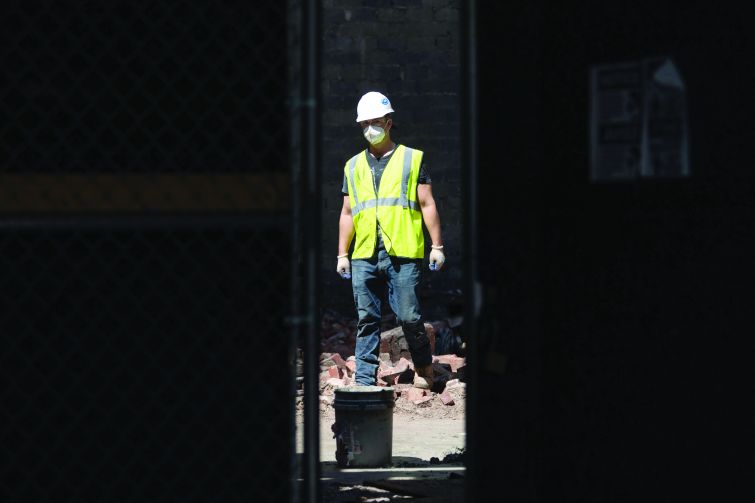 A construction worker wears his mask at a site in New York in August 2020, as work increased on projects throughout the city. Photo: Alexi Rosenfeld/Getty Images

Early on in the pandemic, Steven Sommer, executive general manager and president of New York construction at Lendlease, found himself negotiating with an upstate New York distillery to purchase a tractor trailer’s worth of hand sanitizer.

It cost “more on a per-gallon basis than the finest cabernet sauvignon that I can think of,” Sommer recalled. “I was like, ‘are you kidding me?’”

He ended up buying 550 gallons of the stuff. The price was steep, but desperate times, desperate measures …

The New York region was among the U.S. localities hardest hit by the first wave of the coronavirus, and, as state and local leadership scrambled to respond, the area’s construction business was scrambling along with them.

The industry faced a number of questions in the first months of the crisis. Which projects would be deemed essential and allowed to proceed? What kind of health and safety protocols were needed for work to go on? Would workers be willing to return to job sites with the pandemic raging? How could the New York construction business contribute to the city’s response and recovery?

At the end of March 2020, then-Gov. Andrew Cuomo shut down all non-essential construction sites in the state. Projects like hospitals, affordable housing, infrastructure and emergency repairs were allowed to continue, but most other work was halted — with no clear timetable for when it might resume.

When the pandemic hit, Sommer and Lendlease were in the middle of a $1.5 billion, 1.2 million-square-foot expansion of the Jacob K. Javits Convention Center in Manhattan undertaken as a joint venture with Turner Construction. Sommer said he thought at first it might take “maybe two weeks” before construction would start up again across the city.

A couple of weeks turned into a month. Then a month turned into two months. It was early June before construction on non-essential projects in New York was cleared to continue.

Meanwhile, industry leaders, in consultation with state and city authorities, were ironing out what safety measures would need to be in place for workers to return. Organizations including the Building and Construction Trades Council of Greater New York (NYC Building Trades), and the Real Estate Board of New York began working together on protocols that could address the needs of a wide range of industry players, said Louis Coletti, president and CEO of the Building Trades Employers Association.

“Then we worked with the governor’s office directly and with the mayor, working through what the protocols would say,” Coletti added. “It was, I think, an amazing organizational effort where the industry, from real estate to labor to construction, all came together to say, how do we do this in a way that is consistent on all job sites in New York?”

The protocols included requirements for hand-washing stations, mask and glove wearing, temperature scanning, daily cleaning and social distancing. While these measures were intended first and foremost to keep workers safe, they were also key to keeping people working. Coletti noted in regard to essential projects, where construction remained ongoing early in the pandemic, “probably about only 25 percent of the workforce assigned to a particular project were in reality showing up.”

“They had concerns for their health,” Coletti said of the early days. “Nobody knew what the rules were going to be.”

Keeping these essential job sites up and running was a crucial part of the city’s response to the pandemic, noted Lorraine Grillo, who was tapped by Mayor Bill de Blasio earlier this year to head his administration’s recovery efforts.

Grillo highlighted efforts ranging from maintenance of essential infrastructure like roads and sewers to the construction of pop-up hospitals and testing centers to the retrofitting of the city’s schools with new ventilation systems as areas where the construction industry proved vital.

For instance, Grillo said, “we realized that to get kids back into the classroom we would have to check every single classroom in every single school in the city of New York.”

“We had companies all over the place that we were managing, and there were around 137,000 classrooms that were checked [for air quality] in about two weeks,” she recalled.

Other projects included construction of a 350-bed pop-up hospital at the National Tennis Center in Queens that, Grillo noted, “went up in 10 days.”

“I think the construction industry as a whole stood up and really got us back — back to school, back to work by helping us get tested,” she said. “They were integral to the success of the recovery.”

The process of shutting down and then ramping back up was a challenging one, though, Sommer noted, citing the example of Lendlease’s work on the Javits Center project.

“Pre-pandemic we had an excess of 1,000 individuals on the job site every day,” he said. “We were exceeding $40 million of work every month. We were working a six-day work week, typically eight hours a day. We were truly operating on all cylinders.”

When the pandemic hit, the project went from those 1,000-plus individuals onsite to around 50, with those workers there mainly to provide security and monitor things like the heating system. Basically, the site went into hibernation.

The Javits Center project was deemed essential 44 days after Cuomo shut down non-essential construction at the end of March. However, Sommer said, “it’s not like you can flip a switch and go from 50 people to 1,000 people the next day.”

“It took us in excess of three months to ramp back up to that 1,000 individuals on our work site,” he said. “And, I will tell you, it was extremely painful.”

A year and a half later, and New York construction still isn’t back to business as usual. Most likely it won’t ever return entirely to the pre-pandemic mode of doing things. In some ways that’s probably a good thing, suggested Gary LaBarbera, the president of the NYC Building Trades.

“I think many of the things that we put into place should remain — especially when it comes to hygiene,” he said, citing as examples the continued prevalence of hot and cold water handwashing stations and hand sanitizer stations. “I think those types of things are just good site hygiene, and I believe that they will become part of the normal culture of how we move forward in the industry.”

Coletti said that while other protocols such as social distancing requirements limiting, for instance, the number of workers that can ride up in a hoist together have relaxed somewhat, they still haven’t returned to pre-pandemic norms.

“Maybe instead of being limited to six or seven people on a hoist, now you can have maybe 10 or 12, but you certainly can’t go back to the larger [pre-pandemic] numbers,” he said, adding that this was largely due to limits instituted voluntarily by contractors and workers.

Coletti noted that project owners have largely supported such decisions.

“It all starts with the owner,” he said. “If the owner begins to say, ‘you know, you’re behind schedule, I don’t care what happened with COVID, I’m holding you to your original budget,’ then you start to get into those business pressures. But we have not sensed that at all.”

“I don’t want to say it’s surprising,” Coletti added. “But I will tell you that I have never seen the industry — again, from real estate to construction to labor — unify on a set of protocols and deal with whatever issues come up as a result of that in as cohesive, comprehensive and cooperative a manner. And I’ve been in the business for over 30 years.”

How long will this era of comity and good feelings last? How long will it have to last before sites can return to full productivity? That will depend in part on vaccine uptake within the industry.

“We as an industry have highly encouraged our membership to get the vaccines,” LaBarbera said, noting that while the NYC Building Trades does not have exact data on the percentage of industry workers vaccinated against COVID, it estimates that around 80 percent of its 100,000 members are vaccinated.

Certain public projects and sectors like health care and schools are requiring fully vaccinated workforces as are a number of private projects, LaBarbera said, adding, “If there’s a situation where workers are required to be vaccinated, we are able to send members that meet those mandates.”

Even with the city’s construction industry still working toward a new normal, it’s time to begin looking to the future, suggested Carlo A. Scissura, the president and CEO of the New York Building Congress.

“We have to really start planning and get to designing and engineering,” he said, “because if we don’t do that right now, if we don’t pick up the pace on the planning and development of projects, two years from now what are we going to be breaking ground on?”