How New York Might Benefit From the Federal Infrastructure Bill 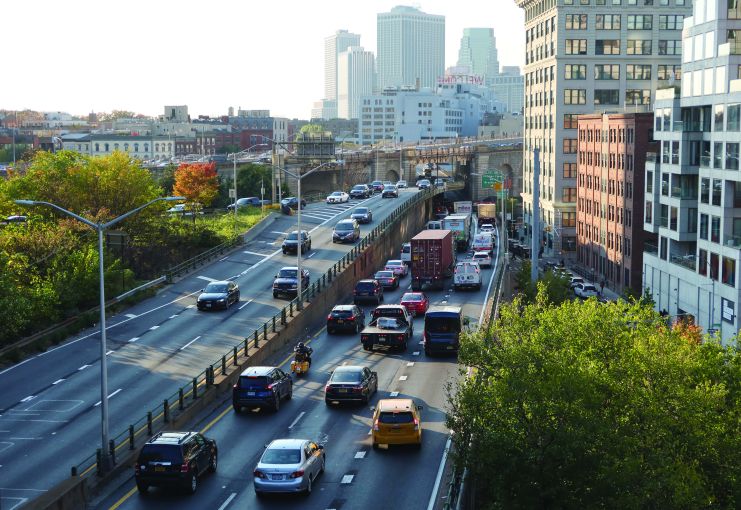 The reconstruction of the aging Brooklyn-Queens Expressway is on the list of projects that New York officials hope will get funding from the federal infrastructure bill. Photo: Gary Hershorn/Getty Images

Americans on both sides of the aisle rejoiced on Nov. 5, when the U.S. House of Representatives passed a $1.2 trillion infrastructure bill that had already cleared the Senate. But plenty of unanswered questions remain about how the $550 billion in new infrastructure spending will be distributed and which projects it will finance.

There’s at least one clear winner in the New York region, however: transportation.

The legislation — formally known as the Bipartisan Infrastructure Framework — includes $66 billion for passenger and freight rail, $30 billion of which will be set aside for Amtrak’s Northeast Corridor. The Metropolitan Transportation Authority, too, is expected to get hundreds of millions more annually out of the framework. The city’s two airports should get the same, and the long-planned Gateway project could nab billions of dollars. Then there are the potential piles of cash for upgrades to roads, broadband internet, the electric grid, ports  and new electric vehicle charging stations.

Gateway is supposed to double the passenger rail capacity between New York City and New Jersey, partially by building a dual-track underwater rail tunnel between the two. Gateway encompasses several other infrastructure upgrades besides the new $12 billion Hudson River Tunnel, including the construction of a new rail yard in northern Jersey, the replacement of two bridges near Newark Penn Station, the addition of two loop tracks near Secaucus Junction, and the rehabilitation of the existing, century-old two-track Hudson River tunnel.

Construction is set to start this year on the Portal North Bridge across the Hackensack River in New Jersey, a $1.9 billion project that comprises part of the overall Gateway program. The eventual expansion of Pennsylvania Station’s underground railroad tracks — which would require eminent domain of a few blocks south of the station — also falls under the Gateway program.

The Gateway Program Development Corporation has already applied for $8 billion in funding from the federal Capital Investment Grants Program, which got a $23 billion boost from the infrastructure bill. Brian Fritsch, manager for advocacy programs at the Regional Plan Association (RPA), explained that the federal government — which is responsible by law for funding half of the Gateway tunnel project — still has to pony up $4.5 billion, along with $1.5 billion from Amtrak.

“Gateway applied in August to be allowed to access that pot of money,” Fritsch said. “They’re waiting to hear back from the feds. The last piece of the puzzle is to get the federal government to commit to the federal share.”

Several other New York megaprojects may try to seek funding from the federal capital grant program, Fritsch said. “It’s hard to know what projects will be funded, but there will be a lot more funding available to the agencies when they do apply,” he said.

The MTA — which barely averted financial ruin last year before Congress bailed it out with COVID-19 relief money — could try to secure funding for its new Metro North stations in the Bronx (known as Penn Station Access), the second phase of the Second Avenue subway, and accessibility improvements to subway stations. Overall, the infrastructure bill promises about $39 billion in investments for public transit, which the MTA hopes to take advantage of.

Indeed, at a Brooklyn Chamber of Commerce breakfast on Nov. 10, MTA CEO Janno Lieber said he wanted to prioritize accessibility upgrades like ramps and elevators in the subway system.

“Thirty years after the [Americans with Disabilities Act], only a third of our stations are accessible,” Lieber said. “When the ADA was passed, with the scale of the MTA’s system and how old it is, everybody acknowledged that installing elevators would take a while. But what they focused on was, let’s take the 100 stations that matter most to ridership and connectivity, and we’re there on the 100. So 50 percent of the ridership is now coming through ADA-accessible stations.

“But, that’s not enough,” Lieber said. “I’m embarrassed to say, we have 472 stations, and only 137 are ADA-accessible. In the current capital program we tripled the number of stations we’re aspiring to get done — 70 stations. We want to keep that pace up and maybe accelerate it, but it’s going to take a while.”

He also mentioned the idea of building an underwater freight tunnel from New Jersey — a pet project of U.S. Rep. Jerry Nadler of Manhattan and Brooklyn — in order to bring more freight onto the underutilized Bay Ridge branch, which is owned by the Long Island Rail Road but used exclusively for freight.

“We’ve worked with the Port Authority and Nadler’s people on a plan that would include mass transit … and it would connect neighborhoods in Brooklyn and Queens that don’t currently have service right now,” Lieber said, referencing the Triboro RX proposal to convert a swath of the city’s neglected freight tracks in the outer boroughs into passenger rail lines.

He also pointed out that the infrastructure bill would increase the MTA’s federal funding by $700 million a year over the next several years.

During the same event, New York Building Congress President and CEO Carlo A. Scissura celebrated the fact that the same bill would help keep the construction industry in the black for a while.

“You’re talking about engineers, planners, lawyers, architects,” Scissura said. “You’re looking at a decade or two of full employment. Let’s work with people like David Ehrenberg at the [Brooklyn] Navy Yard — workforce training, getting job skills up, getting people who may not understand what it means to have a job in construction or architecture.”

Another big-ticket item in the infrastructure package is airports, which are slated to get $25 billion in funding nationwide. John F. Kennedy and LaGuardia airports will receive $295 million and $150 million, respectively, from the legislation.

Scissura’s big infrastructure pitch could tap into the bill’s $110 billion in new federal funding for roads and bridges.

“Let’s tear down the BQE,” he announced at the NYBC breakfast held in Industry City last week. “It is the most ridiculous, disgusting eyesore. It’s dangerous, it’s polluted, it’s rusting. We’ve got a moment to really rebuild our highway system across the nation. Let’s start with a project that affects the most people, the most communities, communities like Sunset Park that have been living under this decrepit rusted shadow for decades. What if, when you approached the BQE,  you saw a light rail system running along Third Avenue, and bike lanes, and no pollution, and you were in a tunnel if you were in a car?”

Scissura chaired a panel — commissioned by Mayor Bill de Blasio — on rebuilding the Brooklyn-Queens Expressway, which released a report in early 2020 on the possibilities for repairing the 70-year-old elevated highway. The report focused on the most challenging portion of the BQE, the triple cantilever in Brooklyn Heights, which was expected to become structurally unsound in five years without significant repairs. Former transportation Commissioner Polly Trottenberg (now the No. 2 at the federal Transportation Department) had pushed to demolish and rebuild the triple cantilever in a way that would have closed the Brooklyn Heights Promenade — which is built into the top level of the cantilever — for several years. Locals in Brooklyn Heights weren’t happy with that option, and the plan to rehab the cantilever has stalled during the pandemic.

In August, the de Blasio administration released a short-term plan for the section of the BQE between Atlantic Avenue and Sands Street. For now, the city has decided to repair the triple cantilever and shift some truck traffic off the road by repainting it with two lanes of traffic instead of three. However, the future is unclear for the rest of the BQE, which runs from the Verrazano Bridge in Bay Ridge, Brooklyn, to the Triborough Bridge in Astoria, Queens.

Up in the Bronx, U.S. Sen. Chuck Schumer and U.S. Rep. Ritchie Torres announced a study last week to cap the sunken part of the Cross Bronx Expressway and turn the top level into a park. Mayoral-elect Eric Adams said on WNYC’s “Brian Lehrer Show” that he supports this plan, and that his former deputy borough president, Diana Reyna, had proposed capping the sunken part of the BQE.

“We do need to really roll back the Robert Moses division of our city and reunite neighborhoods and communities, and I love that idea,” Adams said. “You cap it. You bring communities together. Green space. There’s some great things we can do with that.”

He later tweeted, “Racism is built into our infrastructure, and we need to confront and combat it. Capping the Cross Bronx Expressway is just the start!”

Besides highways, the infrastructure legislation provides $7.5 billion for another automotive use — electric vehicle charging stations.

“Every state is going to want a piece of that,” said Robert Freudenberg, a vice president for energy and environmental programs at RPA. “I haven’t seen anything at the state level where that funding comes down, only on the federal level.”

The city rolled out a new pilot program in September for electric vehicle charging stations. With its plan to install 46,000 chargers citywide by 2030, the New York City Department of Transportation seems primed to tap into that federal infrastructure funding for electric vehicles.

The infrastructure legislation also includes $65 billion for modernizing the electric grid and $50 billion in resilience funding to help guard existing infrastructure against natural disasters. New York would be able to take advantage of those programs as well, because the state environmental agency is working on two major initiatives to “green” the electrical grid: a hydropower line to Quebec and wind farms off Long Island and Brooklyn.

“Any funding that comes from the grid will benefit a state like New York that’s been ahead of the curve in trying to clean their grid,” Freudenberg said. “Federal funding will reach some of these projects in a way that helps make them a reality.”

He also suggested that federal infrastructure funding could be used to help pave the way for eliminating new gas hookups in residential buildings — a proposal that the City Council is considering.

“If New York City decides to go gas free on new buildings, can federal funds help to build in the alternatives?” he asked. “If they’re talking about a one- to two- or five- to six-year timeline, is there a building support fund from the federal government?”

Freudenberg also pointed to the $17 billion in new federal funding for the nation’s ports as another boon for New York.

“We have to update our ports, reinvest in them in order to facilitate the offshore wind industry,” Freudenberg said. “[Wind farms] don’t appear in the sea by themselves. New York has chosen a few sites but those funds can help convert those sites. There’s more port space needed for more offshore wind. It will be exciting to see how those funds come to our state.”