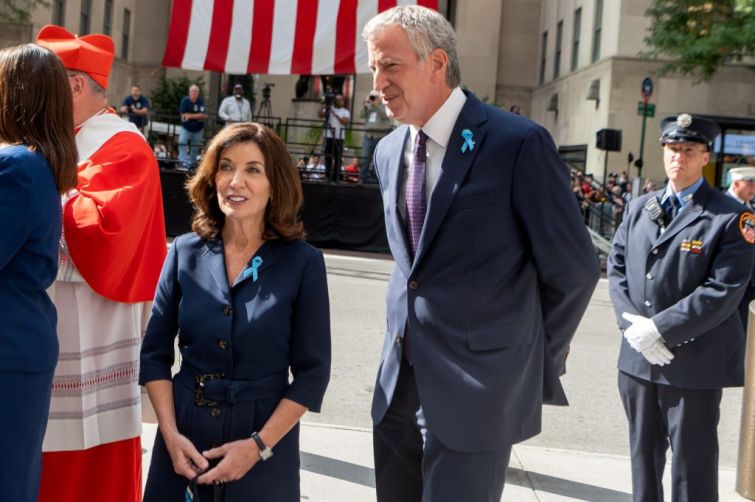 De Blasio has pushed for vaccination mandates as confirmed COVID-19 cases rise — with more than 1,000 people testing positive in the last seven days and transmission rates trending upward, according to city data.

“I’ve talked to the governor over time about everything we’re doing with the mandates,” de Blasio said in a press conference Tuesday. “Now we have absolute proof that this effort worked and it had a tremendously helpful impact on fighting back [against] COVID. So, I think it’s a great time for the state to act, for the MTA to act, and I think will help us get out of the COVID era.”

But with a shortage of subway operators at the MTA, a mandate could hamper the state-controlled agency still recovering from a hiring freeze, Bloomberg reported. Hochul said the infection rate among MTA workers was 0.6 percent — half of the city’s rate — and that four out of every five MTA employees are fully vaccinated, Bloomberg reported. Those who are not vaccinated get tested for the virus each week, Hochul added.

Hochul called on New Yorkers to get their booster shots on Monday — an additional dose of the vaccine that increases a person’s protection from the coronavirus. New Yorkers 18 years and older are eligible for a COVID-19 booster dose six months after receiving the Pfizer-BioNTech or Moderna initial vaccine series, or two months after receiving the Johnson & Johnson COVID-19 vaccine.

“We’ve made sure that there’s plenty of supply at multiple sources,” Hochul said in a Monday press conference. “And so I’m encouraging everyone. Please get the booster. Please get the vaccination if you’ve not been vaccinated.”

City employees are required to get vaccinated. As of Nov. 23, 94 percent of the city’s municipal workforce was vaccinated, compared to 88 percent of adults in New York City as a whole, according to the mayor and city data.

All city municipal workers were required to get vaccinated by Nov. 1 or be forced onto unpaid leave, except for the Department of Corrections, which has a later deadline of Dec. 1 given staffing shortages at Rikers Island.