Housing, zoning, quality of life issues — Adams, seen as more business-friendly than his predecessor, starts virtually from scratch in some cases 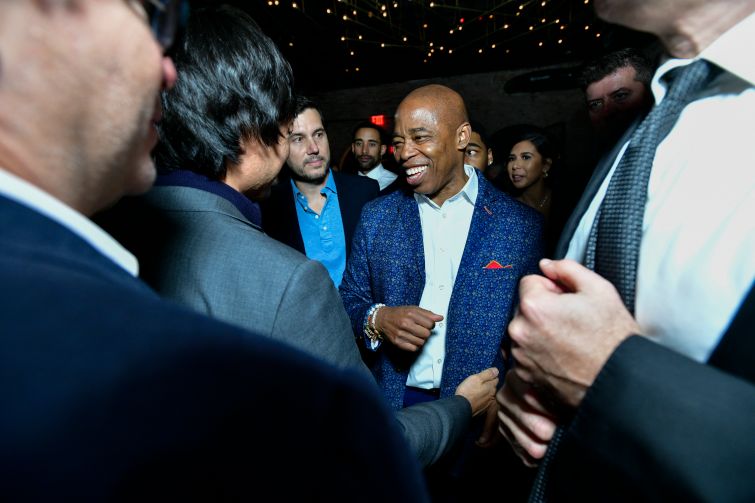 Hours after Eric Adams trampled his Republican rival on Nov. 2, the presumptive mayor was already setting his sights on a new target — Mayor Bill de Blasio and the “dysfunctional” bureaucrats who work for him.

Adams castigated city officials for failing to provide city services in a timely manner despite collecting billions of dollars in tax revenue.

“We’re taking $97 billion and giving you an inferior product and we’re supposed to act like everything is alright? Damn it, it’s not alright,” he said at his election night victory party at NoHo’s members-only club Zero Bond.

Then the next morning, in a series of appearances on local television stations, he lambasted workers who run city agencies.

“Our city is dysfunctional due to agencies’ systems,” Adams told PIX 11. “I say this over and over again — our wounds are self-inflicted.”

If de Blasio felt wounded by the remarks, he didn’t show it.

“I hear his critique differently. I hear it very much as similar to what I said in 2013 about the ‘Tale of Two Cities,’” the outgoing mayor said. “I don’t know a single person who thought we were going to solve all the inequalities of society in four years or eight years.”

Adams, the Democratic Brooklyn borough president as well as a former state legislator and police captain, trounced Republican Curtis Sliwa 66 to 29 percent at the election with just over 1 million people casting ballots. His primary victory in June was much closer, when he edged former Sanitation Commissioner Kathryn Garcia by 7,000 votes out of 800,000 ballots in the final round of ranked-choice voting.

“It’s more than just recovering from COVID — it’s figuring out how to adapt New York City to the new economy created by COVID,” political consultant Hank Sheinkopf said. “Mayors have to instill confidence that they are capable of dealing with the crises at hand. Every mayor walks into trouble, but Adams is walking into real trouble.”

Adams ran on a law-and-order platform as crime rates ticked upward this year, arguing the New York Police Department should be empowered, not defunded.

He appears inclined to delegate day-to-day operations to his commissioners, telling The New York Times he “won’t have to manage the police department” or the city’s budgetary office. Political observers believe he will have a far more hands-on role directing law enforcement agencies than he is indicating publicly.

“I think he’ll be the police commissioner,” said one real estate source who asked not to be named. “Most mayors are scared of the police department because it’s very difficult to understand how it operates, but Eric has firsthand knowledge of it. He’ll be very involved.”

So far there have been few details about how he wants to improve public safety. Adams has floated bringing back the NYPD’s plainclothes anti-crime team, which had been responsible for a high number of fatal police shootings. More recently he called for a new task force to combat gang violence and said he would revisit the city’s vaccine mandate for municipal workers, including police.

Adams’ plans for creating more housing and development are even less clear. Real estate insiders believe he will be more pro-development than in his tenure as borough president, where he had extensive notes for the de Blasio administration’s East New York, Brooklyn, zoning but was less engaged, while still supportive, of Kings County’s Industry City and Gowanus rezoning proposals.

His to-do list will also be dominated by several legislative priorities that Albany legislators must renew next year before they expire. He is expected to seek an extension of mayoral control of schools. And he will likely support a renewal of a tax subsidy, known as 421a, which helps developers build below-market rental units throughout the city.

“When given an opportunity to build a condo or rental, you want people to build rental housing and that right now requires a massive government intervention,” one Brooklyn developer said. “Eric will have more sway with Albany in the first six months than we’ve seen a mayor have over Albany in a long time. There’s an opportunity to get stuff done in Albany in 2022 for city priorities in a way that hasn’t existed in a while.”

How he’ll do it

The biggest change between the de Blasio administration and an incoming Adams administration could be the new mayor’s treatment of the business community.

During the campaign, Adams was adamant about welcoming input from the private sector after years of prolonged hostility from the de Blasio administration and a pandemic that upended the region’s economy.

“He’s really messaging that he wants to unite the city. He’s embracing business, he’s embracing labor, and saying we really only move forward together,” said Kathryn Wylde, CEO of the Partnership for New York City, an association that represents city businesses. “That’s obviously great news to the business community.”

When it comes to governing, Adams has enhanced leverage in Albany now that Gov. Kathy Hochul is running for reelection and could use the support of Adams’ base to fend off three Brooklynites running against her. (Hochul made a brief appearance at Adams’ party Tuesday.)

And Adams will seek to change the mentality within city agencies so they are more oriented toward serving customers instead of punishing businesses through fines and delays. He proposed developing a CompStat-style tracking system for different agencies’ performance in real time, although it is unclear what they will measure and how they will be evaluated.

“I’ve heard him use as an example that it’s not acceptable that you build a brand-new hotel and it takes two years to get a sprinkler inspection before you can open,” Fisher said. “I’m not saying construction safety won’t be important to him, but it’ll be important for him so developers can pull permits and get projects started and he’ll hold agencies accountable if there are bottlenecks.

Adams’ most pressing challenge over the next two months will be assembling a staff to run the city. He named United Way President and CEO Sheena Wright to lead his transition team, and committees for specific areas of government are expected to be announced in the coming days.

“The real question is not who but what is the profile of the person,” Carlo Scissura, president and CEO of the New York Building Congress, a construction industry advocacy group, said. “Mayor Adams will want people who are hard workers who understand New York, who share his vision of lifting up all people in every corner of the city and of being pro-growth with focus on communities.”

Details about who will be hired for what position have been closely guarded. Adams has promised to choose a female police commissioner and is vetting half a dozen candidates, the Post reported. Adams has publicly praised Steven Banks, the commissioner of the Human Resources Administration/Department of Social Services, as one of a handful of de Blasio aides he would like to keep in his cabinet.

Several term-limited City Council members who endorsed Adams in the Democratic primary and former government officials could be in line for senior-level posts. Inwood Councilman Ydanis Rodriguez, who has strong interests in transportation and parks, and Fort Greene Councilwoman Laurie Cumbo, who has an extensive background in the arts, could be apt fits for commissioner roles.

The incoming mayor’s appointments in the coming weeks will tell a lot about his administration’s priorities in the coming years, political consultant Sheinkopf said.

ALSO: Real Estate and Bill de Blasio: The Hits and the Many Misses