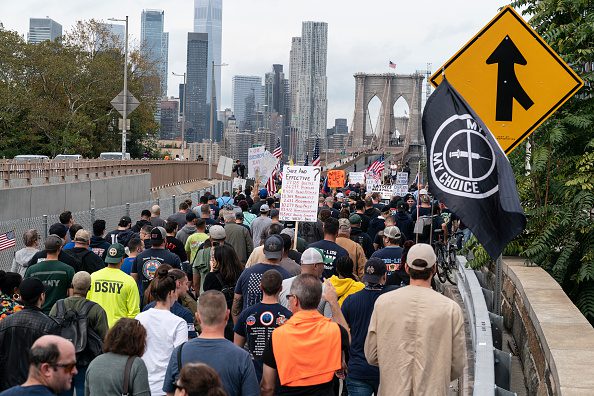 The mandate will begin as scheduled, and city officials will need to appear in court on Nov. 12 to defend the rule against the Police Benevolent Association of the City of New York’s (PBA) lawsuit seeking to declare the requirement illegal, Judge Lizette Colon ruled.

“We’re pleased with this ruling, and remain confident this mandate is on solid legal ground,” a spokesperson for the New York City Law Department said in a statement. “The city’s vaccine mandates make our workplaces safer, further public health and aid the city’s recovery.”

Earlier this month, Mayor Bill de Blasio required all municipal employees to get vaccinated against COVID-19 by 5 p.m. on Friday — without the option to be tested weekly for the virus. The order applies to 160,500 city workers, although more than 86 percent of them have already gotten at least one dose of the vaccines, according to the city. Those who do not comply by the deadline will be put on unpaid leave next Monday.

NYPD spokesperson Sgt. Edward Riley said the department “will be prepared for any changes in personnel due to the mandate” that could take a quarter of NYPD officers off duty on Monday. Riley did not elaborate further. The FDNY said it planned to continue to urge uniformed staff to comply in virtual meetings, along with other measures.

“The department must manage the unfortunate fact that a portion of our workforce has refused to comply with a vaccine mandate for all city employees,” Fire Commissioner Daniel Nigro said in a statement. “We will use all means at our disposal, including mandatory overtime, mutual aid from other EMS providers, and significant changes to the schedules of our members.”

But the head of the city’s firefighters union, Andrew Ansbro, told unvaccinated members on Wednesday to report for duty — regardless of whether they get the shot or not, Reuters reported. The Uniformed Firefighters Association did not immediately respond to a request for comment.

The PBA — which represents more than 20,000 NYPD members — filed its lawsuit this week arguing that the vaccine mandate was broader and more coercive than federal rules, unnecessary given declining COVID-19 cases, did not contain enough exceptions for religious and medical purposes and unnecessarily eliminated the option to be tested for the virus, making it a violation of police officers’ constitutional rights under state law, according to court documents.

PBA President Patrick Lynch slammed the ruling saying it “sets the city up for a real crisis” and called the mandate an “arbitrary deadline” that “violates police officers’ rights.” He said in a statement that de Blasio is putting “politics before public health” by requiring police officers to get vaccinated against a pandemic that has killed more than 737,000 people by potentially causing a “shortfall in city services” with the mandate.

Meanwhile, Benny Boscio, who leads the Correction Officers Benevolent Association — representing the city agency with the lowest vaccination rate of any group — received the COVID-19 vaccination this month, the New York Daily News reported. Only about 53 percent of the New York City Department of Correction (DOC) staff have received one dose of the vaccines, according to city data as of Wednesday.

The mayor gave about 8,000 DOC officers a later deadline of Dec. 1 to get their shots as the city struggles to maintain staffing levels at Rikers Island. City staff has called the jail complex unsafe and unsanitary, as a court backlog traps those awaiting trial into longer stays in unguarded cages, The Wall Street Journal reported.

The city has administered 12 million doses of the coronavirus vaccine total, and vaccines are now available for 5- to 11-year-olds after the Centers for Disease Control and Prevention approved vaccinations for young kids, according to a city presentation on Thursday.

Approximately 73 percent of New York City residents have received at least one dose of the vaccine while 67 percent, or about 5.5 million people, are fully vaccinated, according to city data. Manhattan residents have the highest rate of vaccination.