Real Estate and Bill de Blasio: The Hits and the Many Misses

'My overarching view of the de Blasio administration is that there’s no issue too large to ignore, no issue too small to screw up,' a real estate executive told Commercial Observer. 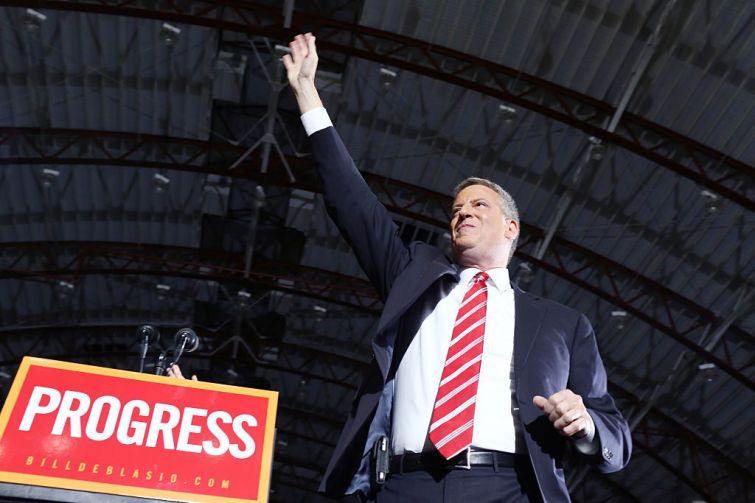 In 2013, Bill de Blasio campaigned on a promise to fight inequality and bridge the divide between the city’s rich and poor.

That message didn’t sit well with the city’s business leaders who chafed at the mayor’s left-wing views combined with his abrasive know-it-all style.

“If you can’t say anything nice, don’t say anything at all,” Kathryn Wylde, president and CEO of nonprofit business association the Partnership for New York City, said in looking back on de Blasio as mayor. “He’s an ideologue. He honestly has philosophical problems with big business and wealth and his negative rhetoric is a function of deep-held personal beliefs.”

Eight years later, and most real estate developers and owners are eager to turn the page on a new era.

“My overarching view of the de Blasio administration is that there’s no issue too large to ignore, no issue too small to screw up,” one Manhattan real estate executive who declined to be quoted by name said. “If you just apply that to the administration, you see a lot of things that fit into it.”

The mayor left behind a mixed record of accomplishments despite misgivings from city elites.

He set forth the greatest expansion of early childhood education in decades — a policy that could soon be replicated nationwide if Congress passes reconciliation. He was the bridge to a new progressive ruling class that runs the City Council and could soon set the agenda in Albany. And he stood up to an omnipotent bully in the State Capitol who wielded power like a boring machine until his wantonness led to his downfall.

Still, while the de Blasio administration correctly identified problems plaguing the city, such as rising housing costs, unsafe streets and systemic racism, little progress was made on many of them during the two terms the mayor served.

“He promised things he could not do, much like most politicians do, and his legacy rests on very few positive accomplishments,” political consultant Hank Sheinkopf said. “There is an awful lot of anger for what he could have done if he was engaged. You can’t take pre-K away from him, long-term affordable housing gains and zonings, but it all gets lost in the chaos that he left behind.”

New York’s leaders have promised for decades to create more affordable housing but de Blasio believed he could most effectively close the inequality gap by providing and saving enough units for his low- and middle-income constituents.

The de Blasio administration set out to create and preserve 200,000 units of affordable housing over 10 years and rezone 15 neighborhoods to help do so. By 2017, the city reached its housing unit goal and revised it upwards to 300,000 units by 2026. In addition, the mayor also strongly backed the state’s extension of the 421a tax subsidy that allowed developers to build more below-market apartments throughout the city.

Land use has been a greater challenge. The Bloomberg administration accomplished 120 rezonings over 12 years, transforming multiple neighborhoods with gleaming glass and steel high-rises. So far, the de Blasio administration has completed only six.

The progressive forces that helped secure de Blasio’s electoral victories also stymied his rezoning plans. One plan to expand Industry City in Brooklyn with a promise of 20,000 new jobs didn’t even make it to the City Council. And Amazon reversed its decision to set up a second headquarters in Long Island City amid community and political opposition despite the mayor’s pleas. Two more rezoning proposals have significant scrutiny from residents in SoHo and Gowanus, Brooklyn, over the unaffordability of future developments and gentrification fears.

“For better or worse, his pro-growth policies with respect to real estate have resulted in real pushback from communities that have stopped many of his rezoning proposals and created a boomerang effect,” Wylde said.

The mayor’s most underappreciated triumph may be the Midtown East rezoning, a hefty lift that eluded even Bloomberg. The rezoning plan paved the way for the city’s latest skyscraper, One Vanderbilt, which opened last September and allowed developers to modernize offices in a swath of Midtown that was losing its competitive edge to the outer boroughs and even New Jersey.

“The administration’s rezoning of Midtown East will spur the creation of new office space in an aging commercial district that was once the envy of the world,” said Carlo Scissura, president and CEO of the New York Building Congress, an advocacy group for the construction industry. “Just as important, however, are the jobs, open spaces and crucial investments in our mass transit system the Midtown East rezoning will generate.”

But the administration’s inability to help a homeless population that rose on de Blasio’s watch is one of his greatest failures. A month after his inauguration, there were 53,615 unhoused individuals in the city. That spiked to 63,839 five years later, and was near 50,000 as of the end of the summer.

The city did convert some unused hotel rooms for those who were homeless when shelters were full. But the city’s reliance on police to conduct street sweeps even during the pandemic and the mayor’s decision to clear 8,000 homeless people from hotels this summer following complaints from neighbors shocked housing advocates.

“It was demoralizing to see a progressive mayor stand with them instead of listening to the most vulnerable members of society,” said Jacquelyn Simone, a senior policy analyst with the Coalition for the Homeless. “There’s a sense of disappointment that he did not always uphold progressive values for defending the rights of homeless people and recognizing housing is a right.”

De Blasio revitalized one transportation mode that started in the Bloomberg era, but left its streets deadlier than ever.

In 2015, the mayor announced he would expand the city’s ferry system beyond its popular East River line to include stops in Astoria, Soundview, Coney Island, the Rockaways and parts of Staten Island.

The new routes have been a godsend for commuters and tourists, bringing more people to the city’s bustling waterfront and offering an open-air alternative to driving or taking a car.

“We created transportation infrastructure that did not exist before which continues the evolution of reopening the city’s waterfronts to commercial and residential activity,” said James Patchett, CEO of A&E Real Estate and former head of the city’s Economic Development Corporation. “The subway system was constructed to ferry people from the center of the island to other centers but never take people from the waterfront to the rest of the city.”

The mayor also launched a Vision Zero action plan eight years ago to eliminate traffic fatalities by 2024. His office implemented many of its measures which included street redesigns, reducing the speed limits on major roadways to 25 miles per hour, and, with an assist from the state legislature, expanded use of speed cameras around school zones.

But traffic deaths climbed despite de Blasio’s focus, up to 243 last year from 220 in 2019 and 205 in 2018. So far there have been 192 fatalities this year, including 77 deaths over a three-month period this summer. Part of the reason for the rise in fatalities may be the prevalence of SUVs and a lack of traffic-rule enforcement.

The mayor also delayed or scrapped plans that would make city streets safer, advocates said. A nettlesome neighbor lawsuit nearly derailed the 14th Street busway which the city made permanent in 2019 after months of planning. But the mayor appeared reluctant to expand the program to other neighborhoods despite widespread praise for a roadway that inexpensively banned cars for most of the day.

Two months before leaving office, de Blasio postponed a long-awaited plan for a busway on Fifth Avenue after consulting with Midtown business leaders. His heralded Open Streets plan has stalled out at a quarter of its goal, with vehicles reclaiming pedestrian corridors. And the city’s Department of Transportation pared its plan to add bike lanes to congested stretches of Seventh and Eighth avenues in Sunset Park, Brooklyn.

A mayor has limited power over transportation compared with the governor and state agencies that control the subways, state highways and ports. But de Blasio’s mixed record on street safety improvements won’t be remembered fondly.

“His reversals demonstrate just how much entitled, not-in-my-backyard thinking is an obstacle to building a greener, more equitable city,” said Danny Pearlstein, a spokesman for Riders Alliance, a group that lobbies on transit issues.

Gov. Andrew Cuomo was the public face of the pandemic in New York but de Blasio could claim credit for stabilizing the city during a traumatic time.

In hindsight, the mayor could have done more initially to protect the city from a deadly pathogen. He touted eating out at Chinatown’s restaurants as COVID-19 took hold and was reluctant to close schools until union leaders and his own staff begged him to reconsider.

It could have been far worse. When COVID swept across the region last spring, de Blasio briefed the public on his administration’s progress containing the virus while scrambling to replenish the stockpile of personal protective equipment, or PPE, and testing supplies through partnerships with the city’s manufacturing, design and fashion industries.

The mayor kept schools shuttered for months although his remote learning program had several missteps. When he sought to reopen schools in September 2020, former aides opined that he “staked his legacy” on the system running smoothly. Some schools with COVID spikes temporarily closed but the school year continued largely without incident.

Most importantly, the mayor’s office managed a multifaceted vaccine rollout and reached a benchmark of innoculating 70 percent of the city’s adults in six months. When the figures stalled, de Blasio mandated vaccines for certain indoor activities and city workers. Vaccination levels are inching upward but a showdown with recalcitrant police, firefighters and sanitation workers loomed Monday, de Blasio’s deadline for most city workers to get at least partially vaccinated.

For all the good decisions the mayor made during the pandemic, the city is still recovering from its ravages. More than 34,500 people died from the disease.

Unemployment spiked during the pandemic to 20 percent, decimating tourism, dining and nightlife for months on end.

Manhattan’s office availability rate stood at 17 percent by Oct. 1, higher than it was a year ago, according to brokerage Colliers. Roughly 420,000 high-income earners left their homes at the start of the pandemic. Some may never return.

“He’s gotten shortchanged on what he’s really done and the pandemic didn’t help,” said Sid Davidoff, a partner at Davidoff Hutcher & Citron and a longtime de Blasio ally. “I’ve seen how hard he worked to bring back small businesses in the city but this is uncharted territory. Everything in the last two years has been focused on bringing back a robust economy to begin with.”

Last year, business leaders tried to get de Blasio to pay attention to public safety and declining quality of life concerns to little avail. His likely successor, Brooklyn Borough President Eric Adams, ran a robust campaign promising to get crime under control, keep the wealthy in town and return New York to its prominence.

The timing of the pandemic may do more to sour New Yorkers on de Blasio’s legacy than anything else he accomplished or failed to enact.

“It’s when this occurred, not just that this occurred,” one Brooklyn developer who declined to be quoted by name said. “That’s the context of his eight years. Before COVID, we had uninterrupted growth and now we have very little to show for it.”