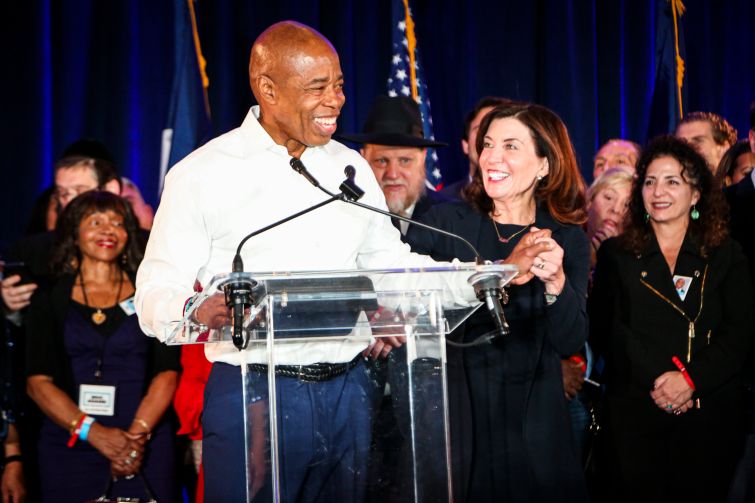 Eric Adams will become New York’s second Black mayor as voters trusted his message to clean up crime, promote economic growth, and steer the city through a global pandemic.

Adams, the Democratic Brooklyn Borough President, trounced his Republican opponent, Curtis Sliwa, by 40 points with 98 percent of the vote in Tuesday night. He held a photograph of his late mother as he voted earlier that day and compared New Yorkers to a Snapple soft drink at his victory party, exclaiming they were “made from the best stuff on Earth.”

Then he implored his supporters to join him to do the difficult work of tackling COVID-19, violence and inequality.

“We are so divided right now, and we’re missing the beauty of our diversity,” Adams said at his election night party at the Brooklyn Marriott. “Today we take off the intramural jersey and we put on one jersey: Team New York.”

A diverse coalition of voters helped the Brooklyn native and former police captain achieve his lifelong dream of becoming mayor. He secured the backing of progressive outer borough voters and organized labor while also earning endorsements from former mayors Michael Bloomberg and Rudy Giuliani and the New York Post.

Getting elected mayor in a city where Democrats outnumber Republicans 7 to 1 was the easy part. Now he must grapple with a spate of subway crimes, conflicts with city workers over vaccine mandates, high unemployment, housing insecurity, and multiple industries upended by the pandemic.

“It’s more than just recovering from COVID — it’s figuring out how to adapt New York City to the new economy created by COVID, which involves the real estate community and what’s left of the financial community,” political consultant Hank Sheinkopf said. “Mayors have to instil confidence that they are capable of dealing with the crises at hand. Every mayor walks into trouble, but Adams is walking into real trouble.”

Adams ran on a platform that prioritized public safety after crime rates ticked upward this year, arguing the Police Department needed additional support and should not be defunded. He was just as adamant about embracing the private sector after years of prolonged hostility from the de Blasio administration and a pandemic that upended the region’s economy.

“He’s really messaging that he wants to unite the city and that’s obviously great news to the business community,” Kathy Wylde, president and CEO Partnership for New York City, a business association, said. “That’s what’s made New York a great city. We have not let ideology or class divide us when we’re facing great challenges.”

Adams said the city “betrayed” New Yorkers for years and promised to reverse the trend, in a tacit admonishment of his predecessor. But that didn’t keep de Blasio from tweeting his congratulations to his colleague Tuesday night as results came through.

“A graduate of our public schools. A decorated NYPD veteran. A brave voice for justice in our streets. A bold public servant with Brooklyn spirit and style. @EricAdamsForNYC embodies the greatness of our city. He will be an outstanding mayor,” de Blasio wrote.

But it was Gov. Kathy Hochul who appeared with Adams on the podium as the evening’s festivities wound down. Hochul, who is running for re-election next year against three other Democrats from Brooklyn, held Adams’ hand aloft and declared a “whole new era of cooperation” in a dig at her own predecessor’s endless tussles with Mayor de Blasio.

“The only thing where the city of New York and the state of New York are fighting about is fighting to make your lives better,” Hochul said. “We will fight for you, not fight each other anymore.”