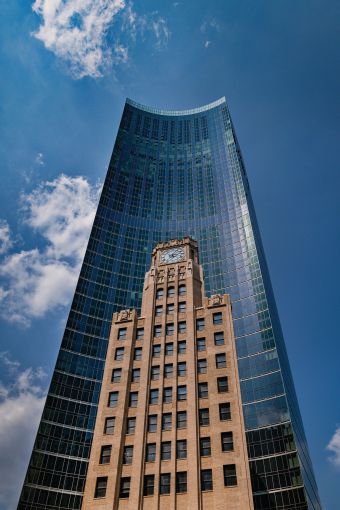 Residents of a new luxury building in Queens will be able to control the city’s skyline with the touch of a button.

The Durst Organization’s 958-unit residential apartment building at 29-59 Northern Boulevard, dubbed Sven, in Long Island City is offering residents the chance to illuminate the tops of some of the city’s tallest towers — like 1 World Trade Center — through an app called Spireworks.

The app was founded by Mark Domino, the son-in-law of Douglas Durst, whose real estate portfolio’s lights could be controlled by Spireworks. These include the 300-foot spire at One Bryant Park in Midtown, One Five One and Sven itself.

Tenants at Sven will receive a membership to Spireworks, which launched in 2017 and raised more than $100,000 for charity last year with public events, where, for a donation to a COVID-19 relief fund, public users can control the lights as well.

The app has 30,000 users and is normally invitation only — a policy that’s only grown more restrictive since a Tinder user posted a profile seeking to pay $1,000 for a free membership.

“We grew to a certain point until I would dare say some entrepreneurs started to try [to make a] small business out of selling our invites,” Domino said. “Now we look more to our existing members, with remaining invitations, [and we’re] very cautious of course.”

The light program isn’t the only amenity at Durst’s residential tower. Residents willing to pay the $2,950 to $6,000 per month cost of a Sven apartment have access to studios for yoga, pilates and boxing, a two-level library, a conference center, coworking space and a poker lounge, according to Durst. Of the 958 units, 288 are income-restricted.

Domino, who also serves as the digital director at the Durst Organization, was excited to partner with the residents of Sven, which soft-launches its leasing on Monday.

“We’re getting a lot of requests for accounts and we’re working on some kind of way to accommodate the interest,” Domino said. “I want people to be able to enjoy this.”