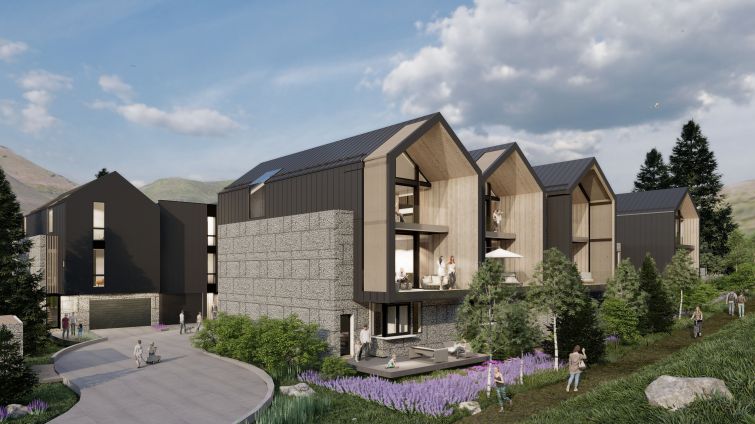 The financing was provided to Franklin “Finn” Boyer, who’s the registered agent behind Alura Vail LLC, a Colorado-registered business entity, according to records from the Colorado Secretary of State’s office.

“[The borrower] has been deeply involved in the Vail [area] real estate scene for the last 12 years,” said Tom Gunnison, a senior vice president of the Mountain West region at Broadmark Realty. “He has successfully completed dozens of projects, has a deep knowledge of mountain construction, has a good relationship with the city, and has a network of subcontractors that can execute quickly and on budget.”

The roughly 35,000-square-foot townhome development will be situated on more than an acre of land at 1488 Matterhorn Circle in Vail, one of the country’s most visited mountain destinations; the property provides access to Vail Mountain’s Cascade Chairlift. Encinitas, Calif.-based The Brown Studio is the lead architect, which is collaborating with design firms Henrybuilt, Design Workshop and Aspen, Colo.-based Bennett Design.

The project’s townhomes will feature five- and six-bedroom floor plans, ranging in size from 3,500 square feet to around 4,600 square feet, according to information provided by Boyer. The units will also have either a 2 or 3 car attached garage.

“With the end of 2021 fast approaching, we are seeing sustained and robust demand in the nation’s housing market,” said Broadmark Realty CEO Jeffrey Pyatt, who added that with a “healthy pipeline” of new housing product on the way, his firm is well positioned to continue to finance “well-capitalized” borrowers and “help them see their business plans through to completion. We look forward to another productive quarter as we evaluate new lending opportunities.”

The third quarter, in general, marked a massive surge for the commercial property debt space, driven by a more active market for acquisitions, according to research from CBRE released on Nov. 4. CBRE’s Lending Momentum Index — tracking loan origination activity — showed that such activity climbed by almost 32 percent in the third quarter from the second quarter, and it was more than 29 percent above the level it closed at in February 2020, just a few weeks before the onset of the pandemic.

This story has been updated since publication to include new information provided by the owner, Franklin Boyer, and to clarify the design firms that are collaborating on the development.