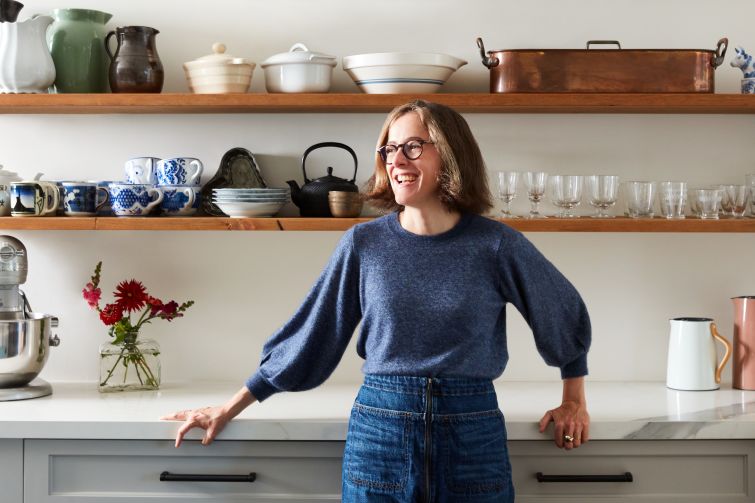 Amanda Hesser is the co-founder of Food52. Photo: James Ransom

One of Brooklyn’s highest-profile projects the past couple of years has been Dock 72, an office building where construction wrapped in late 2019 on a pier in the Brooklyn Navy Yard.

With the initial public offering of its anchor tenant WeWork spectacularly imploding around the same time Dock 72 finished construction and then the onset of all of the COVID-19 lockdowns a few months later, things initially looked bleak for the ambitious project.

Fortunately for its co-developers, Boston Properties and Rudin Management, the CEO that followed WeWork co-founder Adam Neumann into the CEO job in February 2020 saw Dock 72 as part of the answer, not part of the problem. Sandeep Mathrani, himself a veteran of top jobs at Vornado Realty Trust, General Growth Properties and Brookfield Properties, saw that fleshing out the original boss’ ideas for the millennial workforce, with its demands for comfort, fitness and fun at work — as well as a jones for multimedia capabilities, which Dock 72 has — was going to help the new WeWork sell its product.

Enter Food52. Quite literally. As revealed by the New York Post in October, the “digital culinary hub” is taking Dock 72’s entire 42,000-square-foot 13th floor for its headquarters, joining WeWork’s 220,000 square feet. The lease is for 12 years and Food52 plans to move in during the second half of 2022.

Twenty years ago, such a company probably wouldn’t even have existed. Now it’s vying to be  the go-to, one-stop e-shopping and recipe site for foodies everywhere — except, for the most part, the actual food. (Interestingly enough, too, WeWork finally went successfully public in the same October through a special purpose acquisition company.)

On Food52’s website, you can buy a pegboard and all sorts of cooking utensils to hang from it. You can sort through 26 recipes for Hanukkah, and 20 recipes for Thanksgiving desserts that you can freeze ahead of time. In fact, Thanksgiving is kind of like Food52’s Christmas season, given all the at-home dinners being planned.

Amanda Hesser — the company’s co-founder and CEO, and a former New York Times food writer and editor — took time in early November to explain the decision and clear up some mysteries surrounding Food52. (She declined to discuss how much the company is paying for its Dock 72 space, or how that cost compares with its soon-to-be former hub across the East River in Manhattan’s Chelsea.) Her remarks have been edited for brevity and clarity.

Amanda Hesser: We describe ourselves as a cooking and home company. We have articles about cooking, and home and design. We also have a shop. We have contests. We publish cookbooks. We send out catalogues. Pre-pandemic we did a lot of in-person events. We’re planning a retail location.

We’re neither a straight-up commerce company nor a media company. We serve people either way.

So is that your definition of what Food52 is? It seems like it provides recipes, serves people who do cooking as a pastime or a hobby, and also provides e-commerce for cookware and things to enrich home life?

Yeah. The way we see the world, food is at the heart of it, as well as life. It touches on how you live in your home — what you’re cooking for dinner, where you shop, what you want to know about your ingredients, how to entertain, how you want to spend your time at home.

It said on NPR that you guys are worth about $100 million and you turned a profit last year for the first time. Can you update those figures?

I can’t speak to that now. But Food52 has certainly changed.

Can you say if it’s gotten better or worse?

Better. It’s not something we’re entirely focused on at the moment.

Another thing I noticed online is that you recently acquired Dansk, a company that produces high-design Scandinavian china sets and cookware. Why did you do that and what do you intend to do with it?

Dansk is a homeware brand that’s been around since the 1950s. They have a lot of very classic designs that are timeless. So we want to revive the brand so they will have success in the future, bringing in new designs and reviving some old designs that would be well-received even now. For us, it helps us expand our assortment of homeware and tableware.

How does what you guys do translate into the need for office space?

We produce much of our content. That means the written content, the video, the photography. It might be for an article, for a recipe, an idea for a product. We do most of that in-house, and so we need to produce videos; and, of course, have meeting spaces and gathering spaces for our teams.

I noticed that you have a presence on TikTok. Do you actually produce those videos or do people send them to you?

We produce those, yes. Sometimes we might be reposting somebody else’s, but, for the most part, we are producing them ourselves. And we have a whole network of contributors.

Is there something in particular about Dock 72 that attracted you to that space?

Yeah. The Navy Yard itself has a really great history, and also has a history of attracting artists and creators and people in the creative fields. There are a number of entrepreneurs that are already there. There are bakers, there’s a distillery, there’s a production studio. There are a lot of businesses that have a like-minded approach to what we’re doing.

So that is definitely one big thrill. It’s kind of a special and unusual real estate location. A lot of our team lives in Brooklyn, so we like the idea of having our headquarters in Brooklyn.

Dock 72 itself is a beautiful building. It has incredible light, and that is a requirement for us — our photography and our videos. It was an opportunity for us to have a really nice, modern space — with a little bit of outdoor space, with a lot of the features that people want in a modern workplace. There’s outdoor space, there’s a place to get coffee, there are a lot of amenities that make people comfortable and want to go to. And since the pandemic, there are feelings about how workspace has evolved, that you will see in the workplace in the future.

You guys do a lot of media and it’s a very media-savvy building.

Having Food52 over there is a big feather in the cap of Dock 72’s developers.

What affinity, if any, do you feel toward WeWork or toward coworking in general, since WeWork is the anchor tenant in this building?

I don’t think that really had any impact on what attracted us to the building. It was really the media itself, the way it was constructed.

I would imagine that other people who work in the building would be very interested in whatever you are cooking up. In addition to servicing your traditional clientele, will you also be feeding tenants in the building? Is part of this also going to be a food outlet?

No, I’m sorry to say. This is just for our photography and creative needs.

This interview was part of a Tenant Talk newsletter. Consider subscribing to this and other Commercial Observer newsletters.