Pedestrian Piazza Pops Up Along Broadway in NoMad 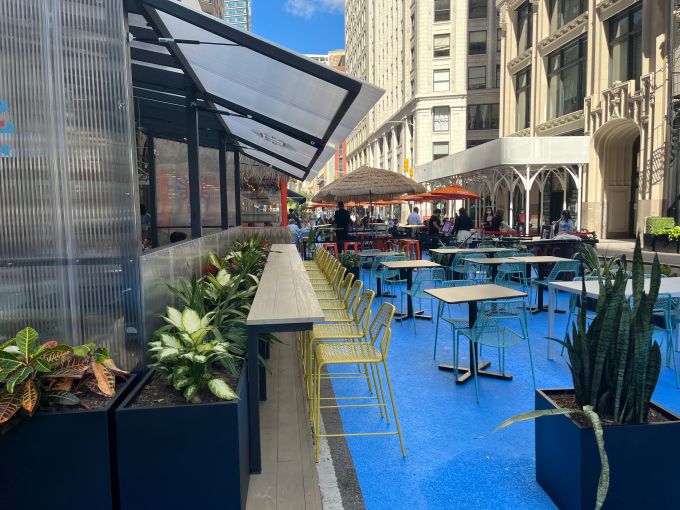 Visitors to Madison Square Park on Friday might notice two blocks of pavement looking a little bluer than usual.

That’s due to the area’s local Business Improvement District (BID), which has carved out an open seating and walking space on Broadway, allowing bikers and pedestrians to walk around the two-block public space until early November.

The pedestrian space, between 25th and 27th streets, comes after the popularity of the Department of Transportation’s Open Streets program, which converted some of the city’s busy streets from throughways for cars to bikeable and walkable spaces, often with food, art and small business stands. The two-block, car-free zone will build on that success, James Mettham, executive director of the Flatiron/23rd Street Partnership BID, told Commercial Observer.

“It’s meant to be kind of both a complement to the successes of many of our businesses that have been able to utilize the streets and sidewalks over the past year,” he said. “We want to find that right balance.”

Using granite blocks to form the pedestrian intersection entrances, the walk runs along Broadway just north of the Flatiron Public Plaza and west of Madison Square Park at 25th Street up to 27th Street. The two blocks are home to restaurants including La Pecora Bianca, The Smith, Num Pang, Tortazo, and Wagamama — which all offer outdoor dining for patrons.

Mettham hopes the two-block walk will connect the BID to its newly extended boundaries — from 28th Street to 31st Street along Broadway and Sixth Avenue — that it will assume in January of next year. He also hopes to draw back tourists and office workers to the area.

“[We’re] making sure people know that it’s not just a return to an open floor or a cubicle inside a building, but to places that they can feel good [and] comfortable eating in that are public [and] outside.”

Though the program was temporary, Mettham hoped it would become a model for the city to make streets more friendly and fun for residents and tourists. He expects to have some public events planned for the space, potentially of the musical variety.

“It’s all with the lens towards by the community for the community,” Mettham said. “We’re fortunate enough that we have some great partners in the multicultural musical world here in Flatiron and Nomad, and we want to give them an opportunity to use and celebrate in the space, too.”

The closed-off streets, dubbed the NoMad Piazza Pop-Up, are open to pedestrians and bicyclists, but not motor vehicles — other than the emergency sort. The BID worked with a group of architects called Future Streets, which advised the group on creating the car-free environment.

“This is another wonderful addition to what is becoming the heart of Open Streets along Broadway in Manhattan,” DOT Commissioner Hank Gutman said in a statement. “Our fellow New Yorkers are embracing these new open spaces, which are helping to support the restaurant industry while also getting folks out of their cars.”