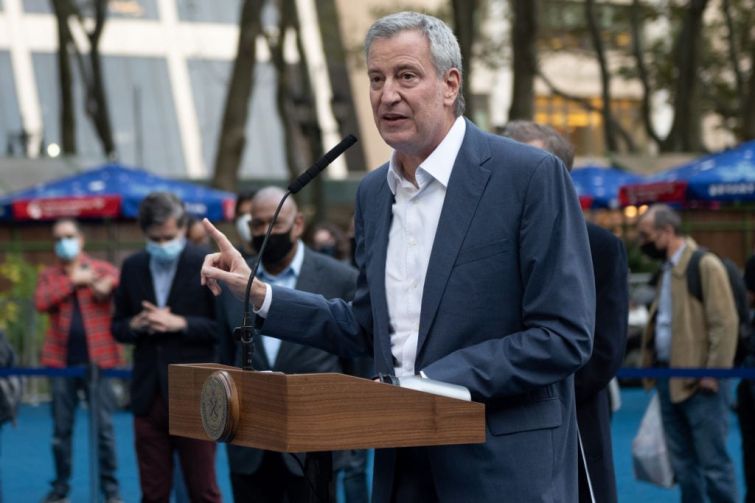 The city’s tourism industry is breathing a sigh of relief as one of its biggest draws, Broadway performances, are expected to reopen this fall, Mayor Bill de Blasio announced on Thursday.

“We are going to move heaven and earth to ensure that Broadway can reopen,” said de Blasio, who announced the news jointly with Broadway actors André De Shields and Telly Leung. The city wants Broadway plays and musicals to restart in September.

“We’ll propose our own ideas to the state,” he noted about vaccinations for actors, referring to the fact that Gov. Andrew Cuomo decides who is eligible for the vaccine.

The mayor added that there will be dedicated testing and vaccination sites for the Broadway and off-Broadway workforce, which includes actors, musicians and stage crews. In the coming weeks, the city will establish a dedicated coronavirus testing site on Broadway for theatrical workers, pop-up COVID-19 testing sites by theaters, and a mobile unit for off-Broadway venues. Broadway workers will start getting vaccinated in April, the mayor said. City officials will also develop plans to manage crowds before and after performances.

Cuomo has already allowed some theaters to reopen for performances in April, with a limit of 33 percent capacity, or a maximum of 100 people indoors and 200 people outdoors. Commercial Broadway productions don’t plan to return until after Labor Day, Charlotte St. Martin, head of The Broadway League, told The New York Times earlier this month.

During the same press conference, the mayor also announced that the New York City Department of Transportation (DOT) will continue its popular Open Streets program, which closes specific streets throughout the five boroughs to car traffic throughout the week.

DOT is reopening applications for open streets, which are operated by neighborhood organizations. Hank Gutman, the transportation commissioner, pledged to “increase our support for community partners” that operate open streets, and to replace the wooden police barricades used to block off the streets with metal ones.