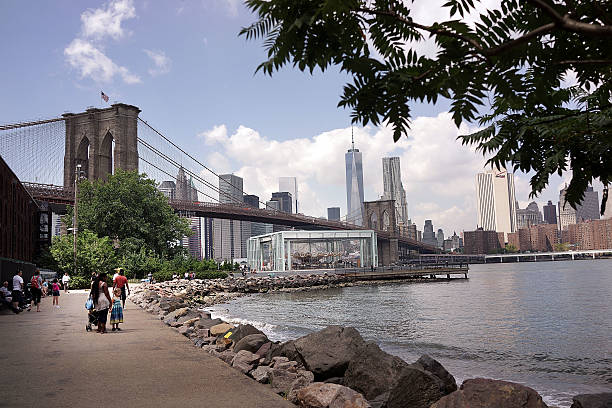 Brooklyn’s retail market started to make a slow recovery from the pandemic, though the market still has a ways to go, according to a report released Thursday by The Real Estate Board of New York (REBNY).

While leasing in the past six months in the borough has remained steady, asking rents have slid in the majority of areas tracked by REBNY.

The report noted that 11 of Brooklyn’s 17 corridors tracked by REBNY have seen a decline in asking retail rents, while 10 of them saw a more than 10 percent dropoff in the average per square foot asking price. Dumbo showed the largest year-to-year decline, with average asking rents decreasing by 23 percent.

These diminishing rents reflect the still-lagging demand for leases, though these numbers may stabilize over the second half of the year, REBNY said.

“We continue to see the market adjust, creating new opportunities for both tenants and owners, as well as posing some challenges as we work to rebuild the city’s economy,” REBNY President James Whelan said in a statement. “It’s critical the public sector stay laser-focused on the city’s recovery by adopting smart policies that drive strong economic development and increased business activity.”

The data, which was published as part of the Summer 2021 Brooklyn Retail Report, overviewed patterns in the borough’s 17 leasing corridors, synthesizing average asking rents and retail trends.

But the report also found that national retailers have started to jump in and leasing has predominantly been sustained through deals on second-generation spaces. As shuttered properties have created opportunities for adaptive reuse, retailers want to take advantage of the ease and convenience of accessing already-ready square footage.

This desire for already-built properties surged in 2020, creating momentum that accelerated through the second quarter of 2021.

“Though retail prices hit a bottom very early in the year, the softening of prices over the past few years has allowed a lot of local operators to take prime high street space again, as landlords accept softer terms without rigid credit standards,” Peter Schubert, managing director of commercial leasing for the Brooklyn real estate firm TerraCRG, said in a statement. “Brooklyn-based retailers have really led the market back, reversing the trend of the last 10 years.”

Meanwhile, residential and shopping-heavy corridors — Cobble Hill, Park Slope and Williamsburg — have helped to spearhead Brooklyn’s recovery. The demand for prime storefronts in these neighborhoods has been high, with spots actively signing retailers looking for a home. A Park Slope corridor saw a 10 percent increase in year-over-year asking rent, the report noted.

These burgeoning retail leases reflect a New York City population that is here to stay, contrary to the assumption that the age of work-from-home would yield a widespread dissociation to the suburbs. Over the last decade, Brooklyn’s population has increased by 9.2 percent, indicating a longevity that is predicted to feed into new leases.

Yet while the prospect of sustained leasing looks promising, the long-term desires of tenants are more difficult to predict, and the report’s findings are only the beginning of the path toward market revitalization. Thanks to the delta variant and the uncertainty of ever-changing leasing policies, pandemic recovery remains in the preliminary stages, and there is still plenty of headway to be made.

Anna Staropoli can be reached at astaropoli@commecialobserver.com.