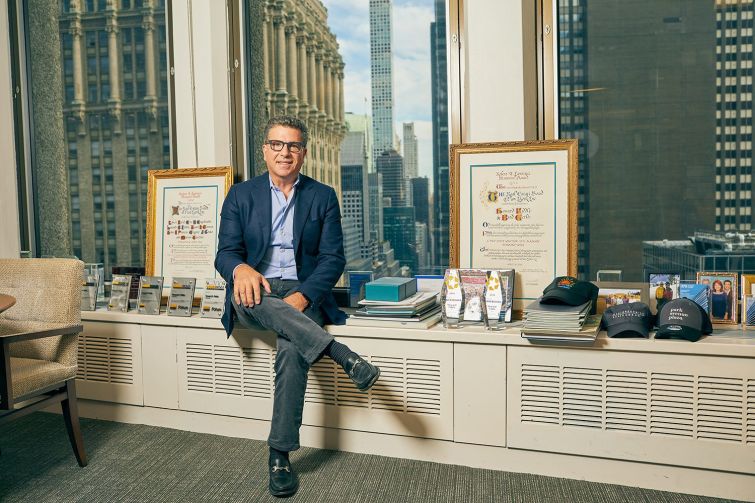 Howard Fiddle has been back in the office for so long, he says he can’t really pinpoint exactly just when he returned.

Nor is Fiddle, a CBRE vice chairman and co-head of the brokerage’s New York City agency department, quite sure offhand how long he’s been involved with some of Manhattan’s topmost buildings, including 787 Seventh Avenue, 40 West 57th Street and 55 Water Street — the last, at nearly 4 million square feet, the largest office building in the borough. (Let’s just say he’s been at this long enough to have been surprised by office rents of $100 a square foot.)

Fiddle is, however, sure that, trying as the past many months have been for office leasing, things are picking up. “Getting better every day, and I mean that,” he told Commercial Observer at the start of a mid-October interview from his office at 200 Park Avenue.

The numbers suggest that as well. Data from CBRE itself show a 13 percent increase in office leasing activity in the first nine months of 2021 compared with the same time in 2020. Other brokerage firms’ data show a similar uptick.

Of course, given that 2020 was the year of the worst pandemic in a century, most third-quarter figures were either bad or close to it when compared with other recent years.

Still, Fiddle plays in a pretty rarefied field industry-wise, representing as he does some of the largest institutional owners long-term. The stats tell only a small part of his tale, then. The rest comes from experience.

Howard Fiddle: I think month by month, quarter by quarter, it’s moving back in the direction that we want it to be — those of us in the real estate business.

A lot of the speculation or reporting about wholly remote work or office space is obsolete is, I think, falling by the wayside. By and large, important tenants renewing and relocation for major corporate tenants has resumed again. If you and I hada business and we said, “Do we need office space or could we be remote?” Maybe. But bigger companies — they’re not getting rid of office space. It’s a long list. We’re as busy as we’ve ever been.

Was there a certain point this year, or during the pandemic, when things turned? Because for a long time it was bad.

My analogy, and it may not be a good one, is I used to be a skier; and you’re at the top of the mountain and it’s such a whiteout that when you put your hand in front of you, you can’t see your hand — during the pandemic, that’s the way it was; there was no clarity; no one could figure anything out.

Now, as the sky’s clearing and there’s visibility, I think big companies said that “being together and collaboration is important, and we’re not abandoning our offices.” Five days in the office, hybrid — that’s all in flux, and will play out over time, and I think companies will evaluate that differently.

What are major credit tenants looking for in terms of lease terms? Are there pandemic clauses now?

What are major credit tenants looking for? I got one word: everything. And, if you don’t ask, you don’t get. I think they come with a long list of asks.

I think, again, as things begin to normalize, a lot of those initial asks in the middle of the pandemic are now looked at as ludicrous. And I think educated tenants and smart tenant-rep brokers no longer put those asks on the table.

One was that people in the middle of the pandemic would say, “Well, if there’s ever another pandemic, five years into my lease, if I can’t use my office space again because of a pandemic, I want to stop paying rent.” There were some conversations about that. That’s not even asked anymore; that’s not even on the table anymore.

There are pandemic clauses. There is one that’s not in 100 percent of every document I see, but most tenants ask for it and most landlords give it: Say a lease is signed and the space is delivered, and the tenant is building out the space; Company A is moving across the street and leasing 100,000 square feet. It takes six or nine months to do it. If, during the buildout period, there’s another government-mandated shutdown — you can’t get building permits, construction crews can’t work — during that period, if that were to happen, the tenant doesn’t lose their free rent. The landlords will say, “That’s a fair ask.” I see that a lot, and I think that’s becoming more of an industry standard.

But, other than that, most of these other pandemic needs and demands have gone by the wayside. There is extra cleaning and air filtration — those are real and important — but, for the most part, the one I mentioned is the only one that will be a long-term residual from the pandemic.

What about lease lengths?

What I do see is for larger tenants, while I don’t see the term shortening, they do want more flexibility than I’ve seen in the past. Years ago, it was more on the upside — “I’m going to expand rapidly, so I need to be able to take more space.” These big tenants, that’s still somewhat important, but they want a little more flexibility to shed space.

Could you describe the mechanics of that? How would it be built into the lease?

You can’t do those things for free. You’ve got to compensate the landlord for the transaction costs that were outlaid with an interest factor and notice period. But I just see those requests, at the moment, a little more than pre-pandemic.

Where are rents headed for the top-shelf space? Obviously, they’re going up. Where’s the peak?

Listen, at some point, $200 will not seem that crazy. I don’t know if it’s five years from now, 10 years, 15. I think, long term, rents are going up; inflation goes up, prices increase.

The issue really is, for the landlords anyway, net effective rents. So the rents are going up, but so are the capital costs to run these buildings — the transaction costs, the real estate taxes, the operating expenses. So it’s — what is the landlord keeping? That has been a concern of our business.

What sort of concerns do landlords have? And what are the answers?

I think, for landlords, you’re concerned about the bigger quality-of-life issues in New York City. There are those issues.

Then there are the quality-of-life issues. There are the tax issues, which impact whether people want to leave New York. It’s the real estate taxes, by the way —  you can get $200 a foot in rent, but if your taxes are $50 a foot … I always say that, even for an individual, it’s not what you make, it’s what you keep. Everyone focuses on the rents because that makes the headlines, but, at the end of the day, it’s what you keep.

You mentioned tech. Are you surprised by its rise over the last 20 years?

Listen, New York has been a big beneficiary, the labor force is here. And I do think that as Big Tech looks at the landscape of where they can be globally, I still think they find that New York is a great place to grow and to expand and to be. So, I’m a believer in it as we climb out of the pandemic.

Do these particular tech companies make demands in their leases that traditional leasing drivers such as finance and Big Law don’t, or haven’t? Or is it all kind of the same?

I used to say this: You looked at an asset — “here’s my building, what’d you think?” Three years ago, five years ago, you’d hear, “Well, this is more of a traditional tenant building; and this one over here is more of a tech building.” There used to be two camps. As time’s moved on, the traditional tenants want to be more like tech and the tech companies, as they’ve gotten bigger, are more traditional. So, there’s a collision.

Even with the dress codes, the big law firms went casual. They needed that to recruit — you’re a kid coming out of Harvard Law School, do you go to work for a big law firm or do you go work for Google? In a way, they’re going after the same talent. So, I find that the demands of tech and traditional tenants, as tech gets bigger, are not that dissimilar.

There are still more blue-chip corporate users, and today it’s more about location — for them it’s still more Midtown-, Park Avenue-, Sixth Avenue-centric, the real blue chips; Big Tech is more Midtown South and the Far West Side. So, you do have that difference. And there are differences in the product type — tall glass and steel versus something horizontal.

But, in terms of the demands in the lease, they’re not dissimilar.

You mentioned the Far West Side. Most of the new development in Manhattan is top-shelf. It’s Class A, designed to draw credit tenants, and there’s a ton of conversion underway to make older properties top-shelf. So, Class B, what sort of future does that have in Manhattan leasing?

In previous real estate recessions, there’s always been a flight to quality. We’re definitely seeing a big flight to quality right now — anything new and anything that is like new. Right now, if you’re not new or not substantially reinvented, you’re languishing.

And, so those buildings, to compete, it does require them to be reinvented. To do that, it requires capital; it requires expertise; and it requires a desire. I think what we’re seeing in this market is the haves and the have-nots, and I think that’s widening. But I think there are substantial opportunities in this environment to look at those B class buildings and see which ones can be transformed.

How common is it now for tenants to move around in a building?

A good owner wants to keep their tenants, right? Replacing a tenant is always much more costly than keeping an existing tenant. That’s just the nature of it.

And businesses aren’t static. So, if a tenant needs to get bigger or needs to get smaller, and it’s a good tenant and you’re a long-term thinker — if you say to the tenant, “Well don’t call me, look at the lease.” Certain owners take that approach. But I think owners that are long term, and want to do it long term, say, “I understand your lease and I’m not going to ignore the lease, but let’s sit down and figure out how we can make this work for all of us.”

That’s critical. Real estate is not a get-rich-quick business, it’s not a sprint, it’s not even a marathon; I think it’s an ultramarathon.

There’s a big, overdue push in commercial real estate to diversify the industry. What is CBRE tri-state doing in terms of diversifying its brokerage ranks and what are the challenges in that?

First of all, it’s a challenge for the entire industry. And CBRE is committed to making progress.

We also have a very diverse internship program to expose young people to real estate careers while they’re still in school. In fact, more than half of our interns this past summer were diverse. And we also leverage eight employee resource groups. Within that, there’s mentoring, networking, job referrals, skill enhancement, etc. So, for CBRE, this isn’t lip service. We’re going full on on this; it’s real. There’s still a long way to go, but we’re going to chip away at it.