The mayor put the Fifth Avenue busway on ice soon after Vornado Realty Trust met with de Blasio to voice its opposition to the plans. 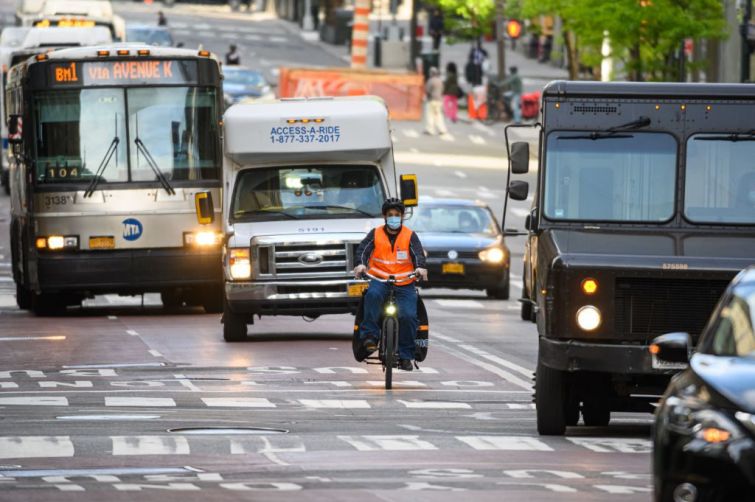 Mayor Bill de Blasio said that he shelved a planned Fifth Avenue busway because he didn’t want to hinder the city’s beleaguered retail sector during a pivotal holiday season, not because a top private developer convinced him otherwise.

“That’s an area that is profoundly important to the city in terms of our economy, in terms of tourism, in terms of retail stores, which have been hurting, really hurting in this pandemic,” de Blasio said at a press conference Tuesday. “It just didn’t make sense to me.”

The city had announced plans a year ago to turn the 23-block stretch of Fifth Avenue below Central Park into a bus-only route following the successful rollout of the 14th Street Busway in 2019.

Fifth Avenue currently has three lanes for cars and two for buses. The proposal would limit the use of the avenue to buses, bicycles and emergency vehicles, only allowing cars to pick up or drop off passengers before making the next turn.

In September, the New York City Department of Transportation even notified the public that safety improvements such as expanded pedestrian areas and a new protected bike lane between 59th and 34th streets would be installed.

But de Blasio soon had a change of heart. In early October, he met with Vornado Realty Trust Chairman Steven Roth, who opposed the city’s plan, offering its own proposal for the 1.1-mile stretch, The New York Times reported.

Less than two weeks later, DOT Commissioner Hank Guttman said the city would postpone any work on Fifth Avenue until after Christmas — days before the end of de Blasio’s term.

“We have reached a point in the year where what we were planning to do in the next month or two raised a very real risk of interfering with the holiday season,” Gutman told reporters on Oct. 20. “Our decision is not to do anything that interferes with that; we will pick up activity after the holidays.”

De Blasio didn’t address whether he spoke with Roth, only that his economic development team wasn’t “looped properly with the people making the transportation decisions.” A spokesperson for Vornado declined to comment.

But the busway had a wellspring of opposition from powerful members of the Fifth Avenue Association, a Midtown business improvement district, which had released its own proposal that allowed more car traffic on the strip. Vornado executives also prepared a slide show with a plan that would keep one lane for cars, allowing vehicles to travel throughout Midtown, and rerouting some buses off the roadway, the Times reported.

“Express buses traveling at faster rates create anxiety for pedestrians and bikers and make the avenue more dangerous,” Vornado’s presentation said, according to the Times. “Fifth Avenue tourists are especially at risk.”

Frontline workers dependent on buses to get from the far reaches of the outer boroughs to Manhattan’s central business district are at risk too. Before the pandemic, the city recorded 110,000 trips per day on express buses that stop along Fifth Avenue.

Transportation advocate Danny Pearlstein said by ditching the plans, the mayor was favoring “wealthy landowners” and tourists over the city’s workforce.

“It’s a classic example of ‘NIMBY-ism’ [the not-in-my-backyard syndrome] where people feel entitled to public space exclude others from it,” said Pearlstein, a spokesperson for the Riders Alliance, which lobbies on behalf of transit riders. “This part of Midtown is closer to being cordoned off for one elite purpose than being broadly shared with the millions of people who need it.”