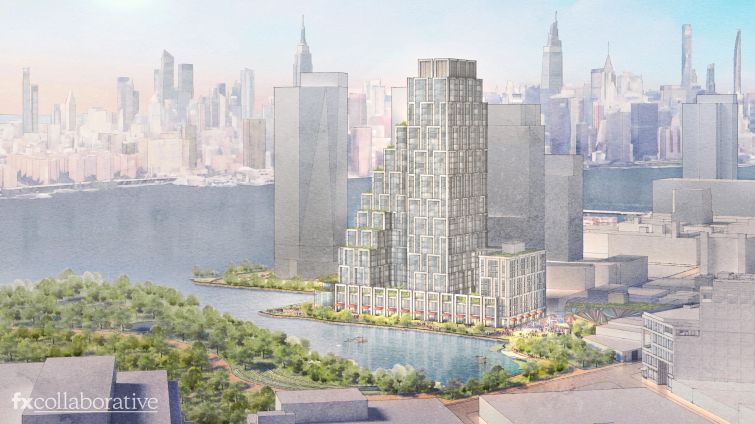 A developer plans to turn a Metropolitan Transportation Authority warehouse on the waterfront of Greenpoint, Brooklyn, into an 840,000-square-foot mixed-use tower, the MTA announced Wednesday night.

The MTA signed a 99-year ground lease with the Gotham Organization for the site at 40 Quay Street to make way for the new project, dubbed Monitor Point, according to the MTA and the Brooklyn Paper.

Plans for Monitor Point, which RiseBoro Community Partnership is partnering with Gotham on, call for 900 mixed-income apartments, with about 25 percent of them permanently affordable, along with more than 100,000-square-feet of retail and commercial space, the MTA said. The development will also be home to The Greenpoint Monitor Museum, which commemorates the Civil War ship the USS Monitor that launched from the site.

The nearly 2-acre lot is currently home to the NYCT Mobile Wash Division — the team that cleans the subway system — which Gotham will build a new facility for nearby in East Williamsburg at 208 Varick Avenue.

While acting MTA chair Janno Lieber praised the plans, saying in a statement it “aligns with the vision for the site articulated” by the local community board, some residents were against the project.

The local community board and Assemblymember Emily Gallagher sent letters to former Gov. Andrew Cuomo to kill the plan, arguing instead for some much-needed greenspace as a wave of development hits the neighborhood’s waterfront, the Brooklyn Paper reported.

Steve Chesler, the co-founder of advocacy group the Friend of Bushwick Inlet Park, told the Brooklyn Paper that turning the idea into the park would also be a better fit for the site since it’s in a flood zone.

“From a resiliency standpoint it would just make more sense to have some sort of natural defense there rather than building something that faces an existential threat of flooding on a regular basis,” Chesler told the paper.

Gotham also plans to build a new NYCT Emergency Response Unit at the Quay Street site to replace the nearby one at 65 Commercial Street, which can in turn be used for a future park. It will also have a waterfront walkway that will connect to the future Bushwick Inlet Park site.

“While this is the very beginning of a process, and the community’s voice must be central to any discussion moving forward, I want to acknowledge the MTA for putting forward an achievable proposal for relocating the NYCT Emergency Response Unit from Box Street Park, a full 16 years after the City and the MTA committed a full park to the Greenpoint community,” Stephen Levin, the councilmember for the area, said in a statement. “The records of Gotham, RiseBoro, and the Greenpoint Monitor Museum demonstrate their commitment to listening to and working with the community.”

Gotham expects to start the city’s months-long approval process for the development in 2024 with the groundbreaking set to commence at the end of that year.