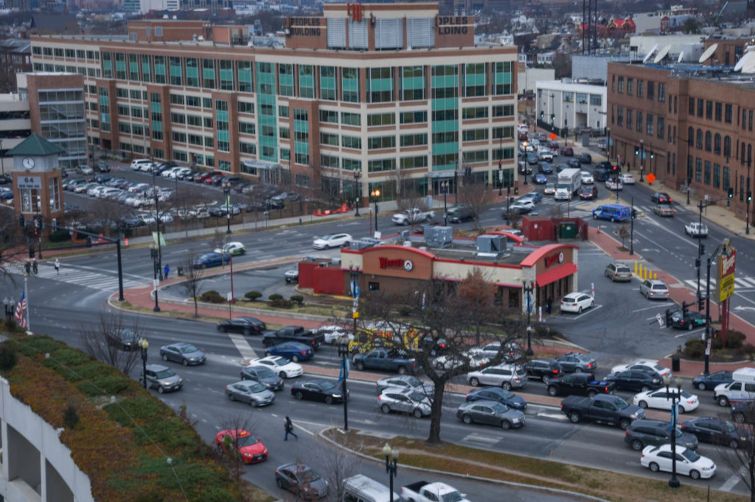 For years, commuters have been confounded by the Dave Thomas Circle, a small triangular block in northeast Washington, D.C., with a Wendy’s right at its center.

Yesterday, the Wendy’s at the notorious intersection closed its doors for good after nearly 40 years.

The fast-food chain was forced out after the District initiated an eminent domain claim on the land, seizing the space with plans to redesign what has historically been a dangerous and traffic-clogged intersection.

In fact, a court hearing in February showed that the intersection ranked as one of the 10 worst areas in D.C. for total number of car crashes, with 80 percent of those involving sideswipes or rear-end collisions.

“Onward to a less confusing and safer intersection,” Mayor Muriel Bowser said on Twitter at the time. “Grateful for the advocacy of neighbors who helped us get here.”

Bowser had previously stated that almost every Washingtonian has their own Dave Thomas Circle horror story.

The triangular “Circle,” as it’s known, is bounded by Florida Avenue, New York Avenue and 1st Street, with O Street and Eckington Place also concluding along the block. The Wendy’s is located at 100 New York Avenue NE.

The city paid $13.1 million for the land, which wasn’t owned by Wendy’s, but by Bernstein Management Corp. Not surprisingly, Wendy’s is reportedly looking into legal action about being shuttered.

In court filings last week, Wendy’s attorney Mark Hearne, who represented former President Donald Trump when he looked to challenge vote-counting in Michigan, questioned the fate of the site until construction on the new intersection begins, and whether Wendy’s will get any money from the city.

Wendy’s released a statement that the company is looking to be compensated appropriately for the restaurant relocation, as well as its lost name and business association between the Dave Thomas Circle and the brand itself.

The D.C. government is working to relocate the fast-food chain to another location yet to be declared.

The District has only resorted to eminent domain a handful of times in recent years. In 2018, it acquired an auto repair shop on Kenilworth Avenue so it could build a pedestrian bridge, and two years earlier, it acquired homes from Virginia developer Insun Hofgard for $1.3 million to create affordable housing.

Another notable case saw the city pay $50 million to developer Doug Jemal in 2017 to acquire land along the Anacostia River to build the Frederick Douglass Memorial Bridge. Jemal is still fighting that move in court.