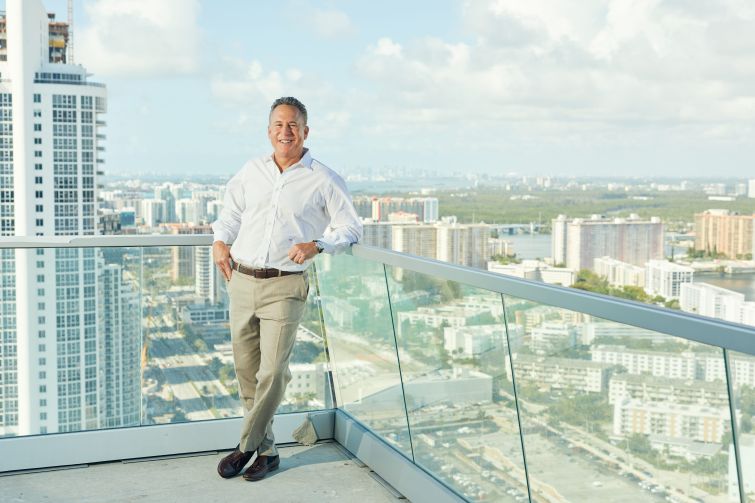 A sculpture of tall, circular rods greets cars as they drive up to the Turnberry Ocean Club Residences. Nine curved, silver shafts shield its doors, welcoming residents to the rarified world behind them.

The opulence shouldn’t come as a surprise. The colossal, 54-story residential building on Sunny Isles Beach is Jeffrey Soffer’s crown jewel, his first major development since striking out on his own as chairman and CEO of Fontainebleau Development.

Soffer’s father, the legendary Donald Soffer, is commonly credited for turning 785 acres of swampland north of Miami into the bustling town of Aventura, Fla. Today, the Aventura Mall, which he developed, is one of South Florida’s premier shopping destinations.

After running his father’s storied company, Turnberry Associates, alongside his sister, Jackie, the two broke up the company in 2019. In the business divorce, Jackie kept most of their father’s retail developments, such as the Aventura Mall, and Jeffrey kept the residential projects, including Turnberry Ocean Club Residences. The senior Soffer had purchased the land underneath it back in the 1970s.

For his debut, the real estate scion spared no expense, creating a luxurious bubble for the one percent. The building is for “the lucky few,” said Jim Cohen, president of Fontainebleau Development’s residential division, who handles all sales for Turnberry Ocean Club Residences. Located at 18501 Collins Avenue, along an oceanfront stretch dubbed “Millionaires’ Row”, the residential tower holds 154 luxurious apartments, ranging between $5 million and $35 million. It’s located just across the Intercoastal Waterway from his family’s stomping ground in Aventura.

The condo tower was designed by architects Robert Swedroe and Carlos Zapata, based in Miami and New York, respectively. Zapata’s projects are often reminiscent of brutalist architecture, featuring both bare concrete and glass, such as his work at Miami International Airport’s Concourse J and the JW Marriott Hotel in Hanoi, Vietnam. But, at Turnberry Ocean Club, the architect struck a different, softer tone. On each floor, white slanted slabs face inward, creating wide arrows all along the structure that reflect light.

Looking for an intricate morning beverage, say, an almond milk cappuccino? The ground floor has a cafe for residents only. Hungry for lunch? There’s a restaurant. Looking for a pedicure and manicure? The building boasts a spa. Need assistance picking out a bottle of wine for a dinner party? A sommelier is at your service.

There’s even more. A few flights up, the stairs between the 30th and 32nd floors sits the Sky Club, which cost the developer $100 million to build. Besides the obligatory gym and bar, the lounge offers two cantilevered pools with views of the ocean and Downtown Miami.

Staff members are attentive to every need of residents, to the point of scrutiny. They are trained to know the names of everyone that enters the property, even before they’ve stepped foot in the building. Some might consider that overkill, but that’s what high-end buyers expect when they drop $11 million for a five-bedroom condo, as the founder of textile company Southpole, Daewon Khym, did last month.

As luxurious it may be, Turnberry Ocean Club has company all around. Just next door sits Dezer Development’s Porsche Design Tower, and further down the road are the Residences by Armani Casa and Ritz-Carlton Residences, among others. Unlike those of neighboring municipalities, Sunny Isle Beach’s zoning rules have permitted developers to construct high, which has created a long strip of supertall towers along Collins Avenue.

The exclusivity of the area only serves to highlight the contrast between the residents of these towers and those across the water. The gleaming condo buildings, taller by far than anything nearby, block much of the ocean view as well public access to the beach.

Just six miles south of the Turnberry Ocean Club property, on the same street, the 12-story Champlain Towers South collapsed in late June, killing 98 people, and raising questions about the viability of oceanfront high-rises. But the aftermath has had little effect on demand for Turnberry Ocean Club condos. With 135 apartments already off the market, the building is now down to a “handful of units,” according to Cohen.

As Cohen put it, in this day and age, Turnberry Ocean Club may be the shiniest of the crop. “Our buyers are looking for brand-new, cutting-edge, the greatest in design and technology,” the executive said.