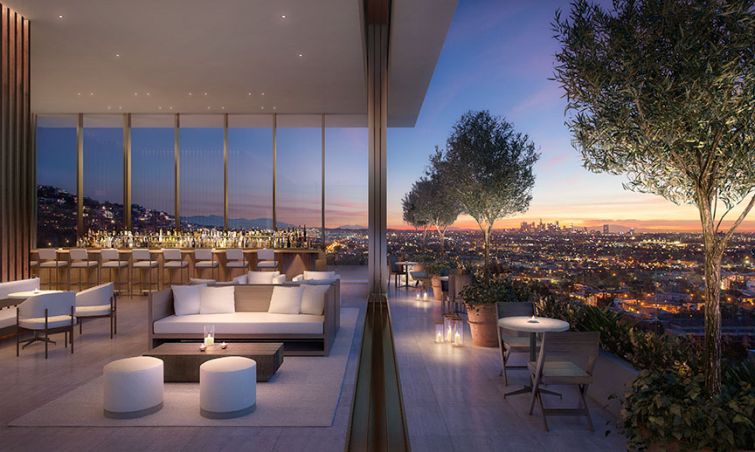 Rendering of the rooftop bar at the West Hollywood EDITION Hotel and Residences. Photo: DBOX

Witkoff has landed a $230 million refinance of its West Hollywood EDITION Hotel, Commercial Observer has learned.

“Lenders and investors alike are fighting to deploy their capital in top-tier, leisure-focused lodging assets, which are positioned to capture an outside share of the pent-up travel and local demand,” Stolly told CO.

The West Hollywood EDITION made its debut in 2019. It sits in a prime spot on the border of Beverly Hills and West Hollywood, and was Witkoff Chairman and CEO Steven Witkoff’s first project undertaken in Los Angeles.

The developer has also been making strides in Miami since then. In June, Witkoff — along with Monroe Capital — closed on the $94 million acquisition of a 4.7-acre development site at 700 North Miami Avenue in Downtown Miami. The site was previously lined up to be the long-planned Marriott Marquis Miami Worldcenter Hotel & Expo Center. MRECS also provided a floating-rate loan in that instance, while the same Newmark team arranged the debt.

The West Hollywood EDITION financing is one of MRECS’ largest deals since Kevin Cullinan and Priyanka Garg took the reins at the platform in May, following the exit of chief investment officer Peter Sotoloff.

Early last month, it was reported that Douglas Elliman had sold out the 20 residences within the West Hollywood EDITION, with the pads being snapped up for prices that ranged from more than $4 million to around $25 million.

A spokesman for MRECS didn’t immediately return a request for comment.

With additional reporting from Mack Burke.

UPDATE: This story has been updated to include J.P. Morgan as a senior lender in the deal.