The previous plans for a hotel and conference center have been scrapped. 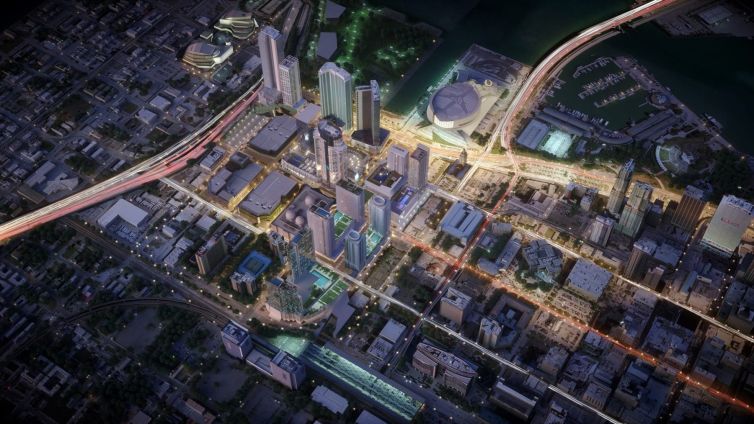 A previous rendering of the site. Credit: Miami Worldcenter Association

As we head into the holiday weekend, for some, today’s a day where “work” is simply a loose construct.

But not for Witkoff, and not for Monroe Capital.

The two just closed on their $94 million acquisition of a 4.7-acre development site at 700 North Miami Avenue in Downtown Miami.

The site was previously lined up to be the long-planned Marriott Marquis Miami Worldcenter Hotel & Expo Center that would be developed in two phases by MDM Group. But, as the Miami Herald reported today, those plans were scrapped and the property site was put up for sale.

The parcel sits in a prime position, to say the very least: adjacent to MiamiCentral — home to Brightline’s MiamiCentral Station and also Blackstone’s recently acquired 2 and 3 MiamiCentral office properties — and the 27-acre Miami Worldcenter mega-development.

While sources told CO that no concrete new plans have yet been unveiled for the site, its as-of-right zoning allows for residential, hospitality and commercial uses of up to 60 stories.

“Miami is transforming as a locus for financial service, technology, and media companies,” Alex Witkoff, principal of Witkoff, said. “We have high conviction on the growth in Miami, and, in particular, this location given its proximity to mass transit and major cultural  centers.”

“We are in the early innings of a protracted growth cycle for South Florida,” Kyle Asher, managing director of Monroe Capital, added. “The Brightline will connect Florida’s largest economic hubs, and we look forward to partnering with Witkoff to deliver a high-density project at its footstep.”

Mack Real Estate Credit Strategies (MRECS) is providing a floating-rate loan for the acquisition and also pre-development design work. The financing was arranged by Newmark’s Dustin Stolly and Jordan Roeschlaub, along with Nick Scribani.

Miami has seen an influx of new residents in recent years, and — over the past 15 months in particular — a tidal wave of capital seeking development opportunities in its red-hot commercial real estate market. Witkoff, in fact, opened an office in Miami in January 2020, prior to the outbreak of the COVID pandemic, which accelerated the migration to South Florida.

Today, Downtown Miami’s residential population has soared to 115,000, a 65 percent increase since 2010. And, while Blackstone has cemented its commitment to Miami — as evidenced by the 2 and 3 MiamiCentral purchases — plenty of other high-profile names — including Icahn Enterprises, Elliott Management Corporation and Blumberg Capital — have also underscored the city’s draw by moving their headquarters there.

In addition to its booming economy and the lifestyle it promotes, Miami offers plenty of perks for big companies considering relocating to the area, including low income taxes and no local corporate taxes.

The $4 billion Miami Worldcenter, one of the largest private real estate developments underway in the country, is led by Nitin Motwani. MDM bought the site that just traded to Witkoff and Chicago-based Monroe Capital for $45 million back in 2017. An LLC owned by Motwani paid $35 million for the site in 2012, as reported by The Real Deal.

“Miami Worldcenter has always been led by world-class real estate development firms. Now that our long-held vision for a 27-acre ‘city within a city’ is coming alive in the heart of Downtown Miami, we are excited to welcome the Witkoff Group to our development and we are eager to learn about their plans for the property,” Motwani said.

“Witkoff is one of the most prolific real estate companies in the country, with premier residential, hospitality, office, retail and mixed-use properties in top tier cities across the United States and abroad,” he added. “With its location directly adjacent to Brightline’s MiamiCentral Station, the Witkoff site is a key connector between the heart of Miami Worldcenter and regional transit access, making it an important component of our master plan.”

A spokesman for MRECS did not immediately return a request for comment.