Lenders Rush Toward Construction Loans on Troubled Asset Classes, While They Still Can

Many private lenders see construction opportunities on retail and hotels — two of the pandemic’s most troubled asset classes — as a smart play now, before the playing field becomes more crowded 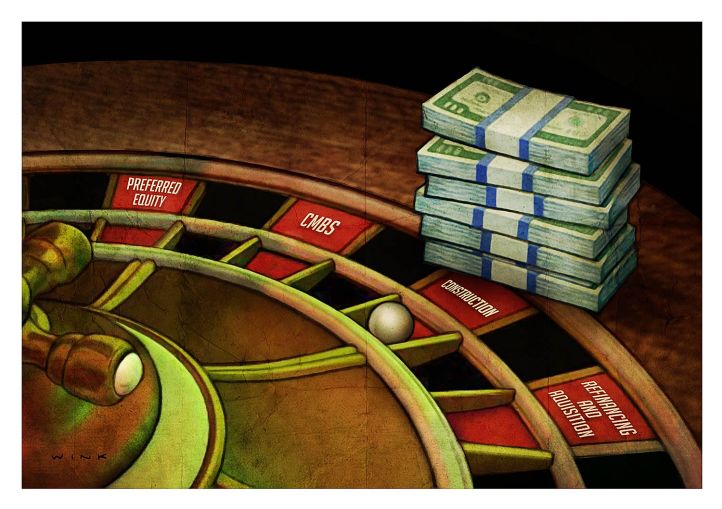 Colorado Springs, Colo., emerged this summer as one of the nation’s hottest hotel markets.

The city, nestled in the southeast edge of the Rocky Mountains about 70 miles south of Denver, trailed only the Florida Keys and east Tennessee’s Gatlinburg and Pigeon Forge areas as one of three leisure destinations with the highest hotel occupancy rates in July — 84.4 percent, according to hotel market research firm STR.

Pandemic be damned, people traveled in droves to “Olympic City USA.” The Colorado Springs Airport saw a more than 30 percent jump in passengers cycle through the airport in July, compared to the same month in 2019, according to the Rocky Mountain Lodging Report, a monthly, multi-state hotel market report compiled by industry trade groups.

Arron Duff, a manager at Wyndham-branded The Antlers hotel in Colorado Springs, told a local Fox news station in July that with the surge in travel and hotel bookings, people are staying longer.

“Our occupancies are 100 percent not only Thursday, Friday and Saturday, like it used to be, but we are seeing stay through Sunday, Monday and Tuesday, which is really good,” Duff told Fox21 News.

Just in time, it seems, the first Marriott International-branded, extended-stay hotel in Downtown Colorado Springs is expected to open next spring, helped by a $55.6 million construction loan that was provided by Dallas-based, private hotel construction lender HALL Structured Finance (HSF). The project will be a dual-branded Marriott SpringHill Suites and extended-stay Element by Westin hotel, as the developers seek to marry two concepts in order to capitalize on the variety of trailblazers making their way to the city.

“Our phrase around here is: ‘Make hay now,’” HSF President Mike Jaynes said about originating hotel construction loans. “We’re trying to originate as much as we can on well-conceived projects, because we may have a whole lot more competition in six, 12 or 18 months.”

Jaynes’ sentiment toward hotel construction loan opportunities is one shared by a number of private, middle-market lenders out there that have benefited from the broader lending community pulling back from funding these loans on prospective hotels and retail properties — two asset types that were hit the hardest by the pandemic. U.S. hotel and retail markets are far from fully cured, but economy, limited- and select-service hotels and open-air shopping centers laced with credit tenants have all proved resilient through the pandemic and have become prime yield targets for eager lenders.

“Now that things have settled down [with the pandemic], we’re very active and looking for [hotel] opportunities,” said Jaynes, whose firm is targeting a 9-plus yield on hotel debt. “It’s a good time to get heavily involved on the construction side with hotels — we’re looking at 15 to 24 months to build a project. If a well-conceived project comes to us with multiple demand drivers, and it’s in a good growth market, we’ll look and see what the trend was up through 2019, and then based upon that, we’ll [calculate] what the overall opportunity is for the project in front of us.

“We like the idea of providing money at up to 75 percent loan to cost on what will be the brand-new product in the market, with, in most cases, a very strong flag behind it as well,” Jaynes added.

Private, alternative lenders that spoke to Commercial Observer are keying in on the more fundamental aspects of a stable hotel construction loan opportunity. They want strong sponsors, with “deep pockets,” who are building in-demand hotel types backed by top hotel brands in the best post-pandemic, drive-to and leisure destinations, according to ACRES Capital President and CEO Mark Fogel, whose group recently funded a construction loan to finish Hotel Canandaigua, a Hilton Tapestry Collection hotel on the banks of the Finger Lakes in Canandaigua, N.Y.

“[Today, I want a] lot more skin in the game,” Fogel said, adding that his company aims for a 10-plus percent debt yield on a stabilized basis on hotel construction loans. “[Where my] loan to cost might have been 75 to 80 percent before [the pandemic], now 65 percent is as high as we’ll go. During the pandemic, it was clear to me that folks that had more equity at stake stood by their deals and boosted them. And with this double-dip with the delta variant — who knows, we could have a triple-dip — [we also] make sure to include a lot of interest and operating reserves.”

ACRES is currently looking at hotel construction loan opportunities on properties in Traverse City, Mich., Sarasota, Fla., and the east end of Long Island, N.Y., with locales like Charleston, S.C., and Nantucket, Mass., being top of mind for the company as well.

“You’ve got to have a market where the average daily rates and occupancies make sense on hospitality and aren’t over their skis,” Fogel said. “My underwriting is not going to assume that they’ll outdo the current market.”

Private lenders, of course, benefit from having more flexibility than regulated banks, most of which — driven by regional banks — are gradually getting back into the lending markets in a meaningful way, taking on refinances and acquisition loans, which bodes well for those lending on construction.

“Any capital source looking at [retail or hotel construction] has no legacy overhang or challenged assets,” a U.S. commercial real estate lending executive at a major national bank told CO on the condition of anonymity to avoid any internal conflicts around speaking publicly. “Any debt funds that have started finding good assets at a low basis would have to be new money. Banks don’t want to increase exposure in those areas. [The only reason a] commercial bank would be lending on retail and hotel is because its book is clean; that’s the only situation where more capital would be allocated to those areas intuitively.”

How long the window will stay open for private lenders to enjoy an abundance of hotel construction opportunities, specifically, remains to be seen, but these lenders sit confidently knowing the market will be there for their exit strategy.

“We feel comfortable based simply on the fact that there’s so much dry powder out there from funds looking to finance completed projects, and as banks get more and more involved, it’ll widen that funnel, so to speak — whether it be a bridge or a more permanent scenario,” Jaynes said. “We’ve had a number of projects that have paid off this year by private debt funds.”

While the market for hotel construction has become increasingly more fervorous, retail has been a much slower burn, and lenders are approaching it carefully.

“If [we’re talking] construction loans on retail, I’d want it pre-leased to, like, a Trader Joe’s; I would not be doing multi-tenant retail,” the U.S. real estate banking executive said. “But, big-box retail is obsolete right now, and most of them will have to be repurposed. The whole retail landscape has to reset.”

The mall space is still racked with turbulence, despite reopenings. Values have seen steep declines; banks and special servicers are selling troubled real estate-owned malls, as they’re not in the business of operating assets; and many owners of Class B malls are trying to invest in capital improvements, or either gut-renovate or tear down and rebuild for a new use, according to market commentary from a Newmark retail professional that was shared with CO.

Fogel said ACRES would only do pure-play construction for retail “if it’s at least 50 to 75 percent pre-leased, with some sort of credit tenancy in there as the anchor, with sponsorship that understands what they’re doing and in a location with liquidity,” Fogel said. “We need to know there’s a liquid market out there for our assets once the projects are built.”

ACRES is eyeing an opportunity right now around a built, operating mall in southern Florida that benefits from zoning rights that would allow for the buildout of around 3 million square feet of additional commercial space and 10,000 residential units.

“To me, that is the more attractive retail deal, going ground-up,” Fogel said. “It’s well located and you have cash flow there — about $4 or $5 million from the in-place tenants — but it’s really a covered land play, where our borrowers are going in there and using that cash flow to pay us, while doing pre-development work on figuring out what they’re going to do with individual parcels, whether they’re going to build multifamily, keep some retail or [introduce] some other type of component.

“A lot of these shopping centers [and malls] are in some of the best locations in their markets, and to be able to create some sort of adaptive reuse for those properties is like gold, because you buy them for cheap and develop them into something, on great land, that might be a better use for the property,” Fogel added.

Open-air shopping centers are where the pure-play retail financings have really caught on, mostly in the way of acquisitions and permanent financings, driven by the quality of the tenancy as some traditional mall tenants seek out locations in open-air centers, according to Brian Harper, president and CEO of RPT Realty, a publicly traded retail REIT.

The U.S. banking executive who spoke to CO anonymously said that it’s the “Whole Foods, Wegmans, Trader Joe’s, and [all these who are] using the Amazon [delivery] concept for brick-and-mortar”, really becoming omnichannel, like Best Buy, that have become main attractions for lenders.

“Overall, the lending market for open air is very healthy, which has led to cap rate compression, because there’s a lot of competition in the market now, with 1031, REITs and pensions,” Harper said. “It used to be a shed-and-bed story, and now the investor world is looking for more yield, and thankfully, with open air, this is one of those sectors where the spigot has been turned on for investment.”