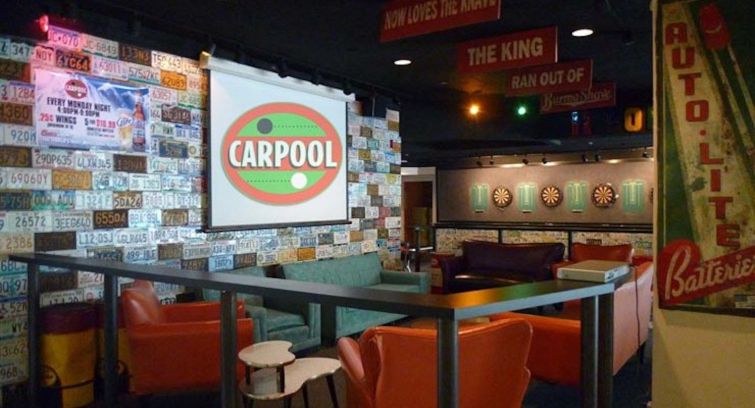 CarPool Beer and Billiards is returning to Arlington. Photo: CarPool

CarPool, a barbeque, beer and billiards sports bar, has signed a 6,382-square-foot lease at 900 North Glebe Road in Arlington, Va.

The lease terms were not disclosed. CarPool will open sometime this fall.

KLNB Principal Kim Stein represented the tenant in the deal.

CarPool’s President and founder, Mark Handwerger, opened the original one in nearby Ballston in 1995, but vacated the space in 2017 when the property was redeveloped. The bar relocated to Fair Lakes, Va. A second location has been operating in Herndon, Va., for more than 20 years.

The new location is less than a half mile from the original. It will feature large garage doors that will open onto a sizable outdoor patio, and will accommodate up to 300 people. There will also be an expanded menu, courtesy of a large, second-generation kitchen space.

“Everything that our customers loved about CarPool is coming back—the décor, the staff, the vibe, the fun—it’s all there,” Handwerger said in a prepared release. “But now, thanks to Kim and KLNB, it’s going to be even better. Kim understood our needs so well, I fell for the first location we toured.”

As a fan of the original location, Stein knew what CarPool’s owner was dreaming of with his new space.

“Since I had experienced the energy of the original location myself, I instantly knew what Mark was looking for and the type of space he would need to reignite the excitement the bar brought to the neighborhood 25 years ago,” she said.

According to Stein, the neighborhood has experienced massive growth since CarPool left the area. Within a one-mile radius, an estimated $134 million is being spent annually on food and dining, and the average resident is 33.5 years old with a median household income of nearly $147,000, she said.