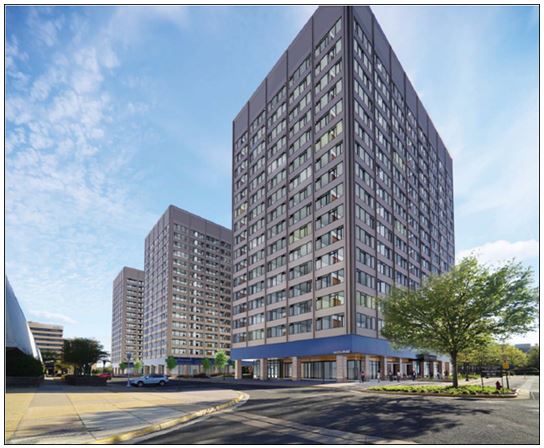 A rendering of the converted former office buildings in the Skyline complex in Falls Church, Va. Courtesy: Pacific Western Bank

Pacific Western Bank (PacWest) has extended $127.5 million in construction financing to The Wolff Company to allow it to move forward with a project to convert three office buildings in Falls Church, Va., to multifamily.

The project financing will go toward converting three office buildings that exist within the eight-building Skyline office park in the Bailey’s Crossroads section of Falls Church into live-work rental assets that might appeal to evolving sections of the workforce operating remotely.

New York-based private equity firm SomeraRoad bought the distressed, 2.6 million-square-foot Skyline portfolio for just $215 million in November 2019, a stark discount to the $870 million figure the complex was pegged at in 2007, when it was financed via the commercial mortgage-backed securities (CMBS) market, CO previously reported. SomeraRoad teamed with The Wolff Company and Highland Square Holdings to buy the assets, and then divide and conquer the conversion campaign.

With this construction debt, The Wolff Company will now be able to tackle its part of the conversion challenge, which will see 675 multifamily units and ground-floor retail added to three buildings — at 5201, 5203 and 5205 Leesburg Pike — according to information from PacWest. Many of the apartments will include dedicated office space, appealing to those needing space for remote work, according to information from PacWest. Wolff and Highland Square submitted plans for their developments in February 2020.

“[The bank] is pleased to partner with The Wolff Company on this project. The combination of Wolff and their local partner, Highland Square Holdings, will ensure a well-conceived and well-executed business plan delivers high quality housing to the market,” said Thomas Whitesell, an executive vice president and group head of the national real estate lending team at PacWest.

The Skyline campus is surrounded by a number of shopping outlets and other supporting rental demand drivers, such as restaurants, medical offices and self-storage space. There is a Target and a variety of grocery stores, including an Aldi and Trader Joe’s — as well as smaller brands, such as the Food Star and Giant Food supermarkets — located around the complex.

SomeraRoad secured a combined $152.3 million in bridge debt from Bridge Investment Group ($80.2 million) and Voya Financial ($72.1 million) in 2019 on its buy of two of the main assets within the Skyline complex — One Skyline Tower at 5107 Leesburg Pike and Seven Skyline at 5275 Leesburg Pike. The company then moved forward with OTJ Architects to begin renovating Seven Skyline’s lobbies and white-boxing sections of the space into speculative suites, SomeraRoad founder and Principal Ian Ross told CO in 2019, following the close of its $215 million acquisition. SomeraRoad is spearheading the work on those two properties.

The eight properties that make up the office complex had previously been owned by Vornado Realty Trust, who lost them to foreclosure in December 2016, after running into vacancy pressure and subsequent issues covering its debt obligations. The publicly traded real estate investment trust then stopped making payments on its debt and allowed it to fall into foreclosure. The office campus was put up for auction that December, but no one bid on it, so it was sold for a mere $200 million to a representative of the servicer, CWCapital Asset Management. CWCapital sold the complex to SomeraRoad almost three years later in November 2019.