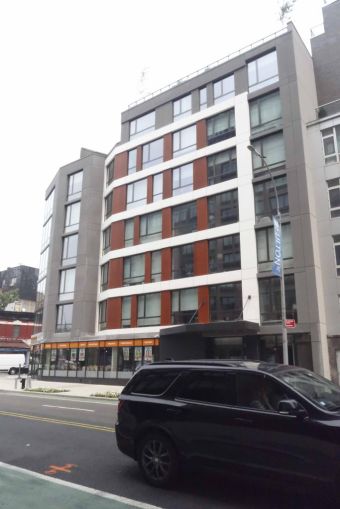 The Daten Group has put its new mixed-use, multifamily development at 840 Fulton Street in Clinton Hill, Brooklyn, on the market at a time when the city’s rental property market has come roaring back, Commercial Observer has learned.

Daten is seeking $34.5 million for the 39-unit, 39,266-square-foot, grocery-anchored project, according to city records and information from JLL. The brokerage is marketing the property for sale and also looking to spearhead any subsequent acquisition financing that would accompany the purchase.

Daten Group Director of Acquisitions Craig Rosenman told CO that the current low interest rate environment, coupled with Brooklyn’s surging multifamily investment sales market and the dynamics that exist around the fates of the Section 1031 exchange tax break and New York’s 421a program, made now a good time to put the newly-built property on the market.

“Everything is lined up to get a good cap rate number, and what we’ve told our brokers is if we don’t come close to hitting our ask, we’ll hold it; we’re happy to hold it,” Rosenman said, adding that the property benefits from the most recent iteration of New York’s 421a program. The current version of the tax exemption for new residential development expires in June 2022. “We want to see if we can get our number.”

Daten acquired the site at the corner of Vanderbilt Avenue and Fulton Street in Clinton Hill in 2014, when it was occupied by a gas station. That deal included 3,464 square feet of air rights from the neighboring property at 848 Fulton Street, a spokeswoman for The Daten Group told CO at the time of the deal.

By 2019, Daten Group had erected a seven-story, mixed-income rental property, with a 1,400-square-foot, ground-floor retail space that is now leased out to Wholesome Farms Market — one of four locations in the borough — on a 15-year agreement, with multiple renewal options, Rosenman said.

The property at 840 Fulton Street — designed by Kutnicki Bernstein Architects — sports a fitness center, lounge, game room, 25-bike storage room, parking on the first floor, and a rooftop terrace that provides views of the rest of Brooklyn and lower Manhattan.

In the fall of 2018, a lottery opened for eight affordable apartments at the location, with monthly rents ranging from $867 for a single studio to $1,123 for four two-bedrooms that were made available — pegged at 60 percent of the area’s median income. A StreetEasy listing currently pegs market-rate studio units at almost $2,600 per month.

Daten Group’s history and ongoing work in Clinton Hill serves as evidence of its confidence in the area. It’s currently developing another multifamily asset at 540 Waverly Avenue, about a block and half away from 840 Fulton Street, which topped out in the spring and should be completed within the next nine months, according to Rosenman. The property will have 135 units.

“We like the area,” Rosenman said. “[840 Fulton is] 100 percent leased. We have one unit that is available for lease and is still occupied. We have a great retention with tenants, and when we do have turnover, they move quickly. An right now, we’re not offering any concessions.”

Rosenman said he thinks 840 Fulton Street is ideal “for a 1031 buyer who needs to make a move before the end of the year.”

The property is hitting the market at a unique time, as the investment sales landscape for multifamily in the five boroughs heats up and developers stare down a summer 2022 expiration of the 421a tax abatement. At the same time, the federal government is exploring eliminating or capping 1031 exchanges.

In the second quarter, the city’s multifamily market saw a 57 percent increase in the number of buildings sold compared to the same time last year, as well as a 23 percent increase in transaction volume from the first quarter, according to a report from Ariel Property Advisors that was shared exclusively with CO.

“People are coming back to the city,” Ariel Property Advisors President Shimon Shkury told CO at the end of last month. “While landlords are still providing some concessions, the concessions [have] subsided, so there’s a lot less of them … In the past six months, we’ve seen a bounce-back effect.”

Transaction and property volume in Brooklyn jumped 21 percent and 15 percent, respectively, from the first half of 2020, while dollar volume decreased 39 percent, according to the Ariel report.

This story was updated to include commentary from The Daten Group’s Director of Acquisitions, Craig Rosenman.