Once the biggest story this side of the East River, tunnel work on the busy Canarsie line never disrupted retail and other real estate as much as anticipated. The pandemic did that. 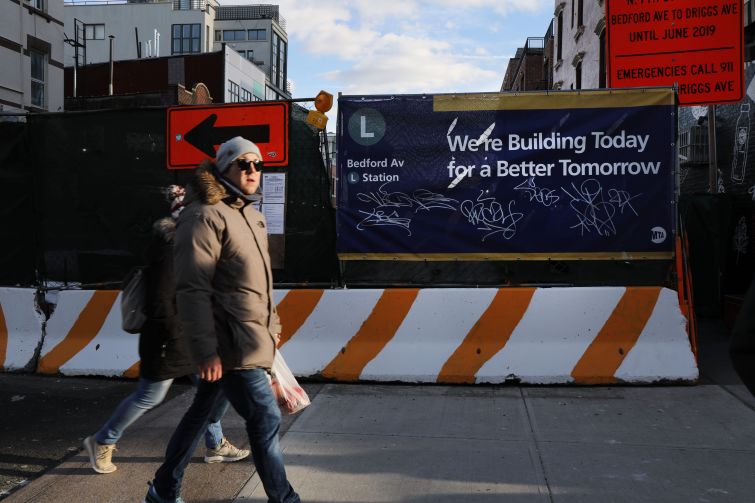 Pedestrians cross in front of some of the repair work to the L line in January 2019. Spencer Platt/Getty Images

For Megan Eisenberg, a Williamsburg real estate agent, the L tunnel project was the dog that didn’t bark.

“They made it out to be the downfall of Williamsburg, and it just wasn’t,” said Eisenberg, an agent for Brick & Mortar Real Estate Services, a residential and commercial agency just half a block from the Bedford Avenue and North 7th Street subway station that was the focal point for the project.

It was the dominant topic of conversation for years in Williamsburg following the 2012 breach during Hurricane Sandy of the tunnel that carries the L train under the East River. The damage to both tubes was so bad that the Metropolitan Transportation Authority, the state agency that runs New York City’s subways, thought for sure it would have to shut down the line for 18 months to make the necessary repairs.

Such a shutdown would have badly disrupted a community that has become an international brand, and a symbol for gentrification in Brooklyn and beyond.

A 2005 zoning change made it easier to build and convert existing industrial properties for residential use, which led to waves of new development and conversion. Millennials flocked to Williamsburg and the adjoining neighborhoods of Bushwick and Greenpoint, especially those working in the burgeoning tech industries that thrived in the sections of Manhattan served by the L train, which runs from West 14th Street and Eighth Avenue in Manhattan, through Williamsburg and Bushwick, all the way out to Canarsie. The train is alternatively called the Canarsie Line.

In a series of hearings designed to measure the community’s preference, the MTA offered residents a Hobson’s Choice. They could either accept a three-year project, under which, one of the two tunnels would be shut down over that period, but the trains would continue to run, albeit with dramatically reduced service. Or a rip-the-Band-Aid, 18-month project that would require both tunnels to be shut completely, but would provide dream service afterward.

The agency determined that people preferred the latter, and made preparations two years out from the 2019 shutdown. The New York Times labeled the project “L-mageddon.”

Then, Gov. Andrew Cuomo stepped in and ordered the agency to reconsider. He brought in engineers from Columbia and Cornell universities to redesign the project, so the trains could keep running and it could be done in a compressed time. They devised a plan that would shut down the line overnight and on weekends.

Work began in earnest in April 2019 and the tunnel work was done by late April of this year. Regular train service was restored. The project had a punch list of odds and ends that were done through the late spring and summer of this year. Improvements to the Bedford Avenue station were completed this past November, including Americans With Disabilities Act-compliant elevators. The MTA even wired the tunnel for cellphone service, the first under-river subway tunnel in the city to be so equipped.

It was even ahead of schedule and under budget. According to Andrei Berman, an MTA spokesman, it was expected to cost $925.7 million. Instead, it cost $853.7 million, 90 percent of it paid for by the federal transportation authority, as part of its Sandy repair package.

“The mood leading up to it, people were very apprehensive,” said Bryan Kirk, leader of investment sales in northern Brooklyn for the brokerage firm B6 Real Estate Advisors. “It made it difficult to execute sales, and rents were depressed, as a result.”

In 2018, the year before it was assumed that the train would stop running, rents for a Williamsburg one-bedroom apartment averaged between $2,900 and $3,000 a month for the whole year, according to data from residential brokerage MNS Real Estate, and a studio averaged less than $2,600. In the two previous years, one-bedrooms rented for as much as $3,521 and studios for $3,068.

In Bushwick, the neighborhood immediately to the east and also served by the L line, rents for a one-bedroom hovered around $2,100 a month in 2018, before climbing as high as $2,340 in the summer, before falling again. In the months when the train project was actually underway, average one-bedroom rents rebounded to more than $2,500 in Bushwick and $3,400 in Williamsburg, before falling off again, presumably because of COVID.

“Buyers were actually excited [for the train closure], because they thought this was an entry point,’’ said Matt Cosentino, a partner at TerraCRG, a Brooklyn-based brokerage. “The summer of ’19 was a tremendous rental season. We knew there was going to be a slowdown.”

As far as investment in multifamily was concerned, Williamsburg investors paid a whopping $732 a square foot in 2016, only to see prices fall to $551 the following year, during which the train was expected to be halted, according to TerraCRG data. Prices rose to $603 a square foot in 2018, before rebounding to $693 last year. Cosentino said the new rent law, which placed restrictions on the ability of landlords to raise rents, was also a factor in 2019, as it was statewide.

But, by the time it became clear that the worst had been averted, there was another problem, Kirk said. Instead of ‘L-mageddon’ in 2019 and 2020, the novel coronavirus pandemic struck. Restrictions that the city and state imposed to keep the infection rate down included reduced subway service systemwide (ridership plunged 90 percent by April anyway). Williamsburg-area residents were able to take the small solace that they were suffering no more than people in other parts of the city.

Caima Conrad, manager of the Crossroads Trading used clothing store on North 7th, said the store shut down for three months starting March 18, due to not the subway project but the pandemic, and when it reopened in June, sales were off by half.

“It’s hard to tell” whether business is off due to cutbacks in subway service or virus-related restrictions, said a sales clerk at the Mandala Tibetan Store, which sells yoga and meditation items not far from the train station, who asked not to be identified by name.

Oasis, a Middle Eastern restaurant whose store was right by the stairs into the subway, had to move onto Bedford Avenue due to the train project, said Mohamad Farai, one of the owners. The fact that the project was not so bad didn’t help, he said, because just the fear of it drove business away, he said.

“It helped that the L kept running, but, by that time, a lot of people had moved,” he said.