Kathy Hochul, New York’s governor-designate, worked on the first one and the second has a federal OK 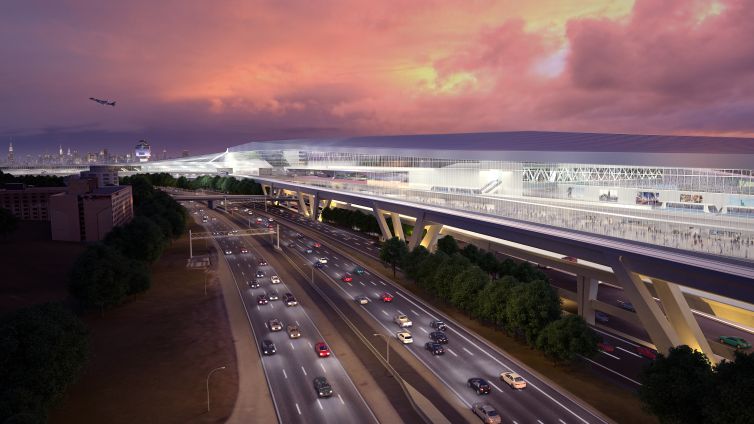 Hours before the Senate approved President Biden’s $3.5 trillion infrastructure plan, Gov. Andrew Cuomo cut short his decade-long reign atop the state, leaving his own legacy as a master builder in doubt.

The three-term governor, who repeatedly invoked Robert Moses as a model for his agenda, revitalized two international airports, completed the Second Avenue Subway, replaced the Tappan Zee and Kosciuszko bridges, rehabilitated the Canarsie Tunnel, and opened Moynihan Train Hall after decades of delays.

But, Cuomo’s toxic management style and a probe into his serial sexual harassment has irrevocably tarnished that record and led to his abrupt downfall. Now, a slew of multibillion-dollar transit projects, including the Empire Station Complex and LaGuardia AirTrain, that Cuomo was not able to finish before his resignation could get another look — or even a heave-ho — once Hochul takes office on Aug. 24.

In her first public address since Cuomo’s resignation announcement, Hochul on Wednesday said she would bring a change in culture to the Capitol and vowed to axe any aides who engaged in “unethical” behavior outlined in the state attorney general’s report. She also said she would travel the state in the coming days to meet with voters and local officials.

“People will soon learn that my style is to listen first and then take decisive action,” she said. “I will fight like hell for you every single day, like I always have and always will.”

“Gov. Cuomo has been willing to impose himself on projects, and I get the sense that Gov. Hochul will seek to hear varying points of views and look for more equitable ways to move forward,” said Renae Reynolds, executive director of the Tri-State Transportation Campaign, a transportation advocacy group. “Hochul should understand who the advocates are, what their perspectives are, and the ways the initiatives around infrastructure have left some communities behind.”

Hochul won’t have to familiarize herself with one of the state’s highest-profile development projects, the Empire Station Complex.

As lieutenant governor, she led the state’s 10 regional economic development councils and worked closely with Empire State Development (ESD), the agency that is leading the redevelopment of six blocks surrounding Penn Station. A draft of the project included 10 skyscrapers, developed by Vornado Realty Trust, which would contain 20 million square feet of office, residential and retail space when completed.

“My position is we have to rally behind Gov. Hochul and ensure that, as funds come available from the federal government, that she is fully supported and we move forward on it,” said Carlo Scissura, president and CEO of the New York Building Congress, a group that supports the construction industry. “I believe Gov. Hochul will continue to lead the way to make New York the capital of infrastructure.”

But the project’s office towers have encountered staunch local opposition, including lawmakers and community members who aren’t eager to relocate or to have nearby houses of worship demolished.

West Side state Sen. Brad Hoylman said the entire project should be “re-examined with a fresh set of eyes” since the need for new office space has dwindled, with Manhattan’s availability rate approaching 20 percent.

“It is necessary to revisit this given the vast scale of this project that’s been moving forward with no checks,” Hoylman said. “This project was cooked up over pre-COVID and now this gives us some breathing room to take another look.”

State legislators already limited what could be developed on the site by restricting a $1.3 billion loan to “transportation improvement projects” only. A public hearing that had been scheduled for May 12 was postponed, although ESD is expected to respond to community concerns in the coming weeks.

For Hochul, political pratfalls abound. The challenges of redesigning the busiest railway station in North America are incredibly complex. In addition, Hochul will have to balance the interests of multiple entrenched stakeholders at the same time she is running for reelection.

“Cuomo’s resignation creates a void in the will to accomplish what major projects require,” said Ken Fisher, a land-use attorney with Cozen O’Connor. “To keep momentum, a new administration will have to do the hard work of building consensus, and 10 office buildings doesn’t inspire anything except opposition. She has the opportunity and the need to take a step back and try to come up with a better way forward.”

Cuomo’s least popular infrastructure project might be an AirTrain proposal opposed by the agency in charge of administering it.

Last month, the Federal Aviation Administration (FAA) approved the governor’s $2.1 billion plan connecting LaGuardia Airport with the Long Island Rail Road and the subway at Willets Point, Queens. The FAA favored the 1.5 mile monorail, which Cuomo proposed in 2015 with a cost of $450 million, over such alternatives as an extension of the subway from Astoria or a link from Jackson Heights. Construction was set to start next June.

But, Queens civic leaders said the project is too expensive, indirect compared to other routes, and forces airport travelers onto the 7 line, which is already overburdened. And staffers from the Port Authority of New York and New Jersey, which would build the line and could pursue funding now that it has the FAA approval in hand, sent a letter asking the agency’s inspector general to examine whether the governor tried to influence the environmental impact statement process to approve the plan over a dedicated bus line or other routes, the New York Daily News reported.

“The truth is out now about soon-to-be-ex-Governor Cuomo’s vanity project,” she said. “We should take a hard look at how these projects were pushed during Cuomo’s toxic tenure.”

Some advocates want Hochul to consider a bus rapid transit line between the Jackson Heights transit hub and LaGuardia instead, which would be less expensive and have a smaller footprint on the environment than a train line.

“One of our biggest concerns are the environmental impacts and whether the assessment effectively assesses the alternatives,” Tri-State Transportation’s Reynolds said. “We need to look at who is privileged through our transportation network and why that is. A majority of people who use transit come from communities of color and low-income communities, and their transportation needs are not being paid attention to.”

But the project has influential defenders. Regional Plan Association President Tom Wright argued that the LaGuardia AirTrain would be a reliable 30-minute trip, compared to the unpredictability of traffic patterns on the Grand Central Parkway, and the FAA’s money should be spent expeditiously.

“I hope these projects will get support from incoming Gov. Hochul,” Wright said. “Delays on large capital projects are often the same as killing the projects.”

UPDATE: Gov.-designate Hochul announced on the “Today” show on Aug. 12 that she would seek a full term in 2022.