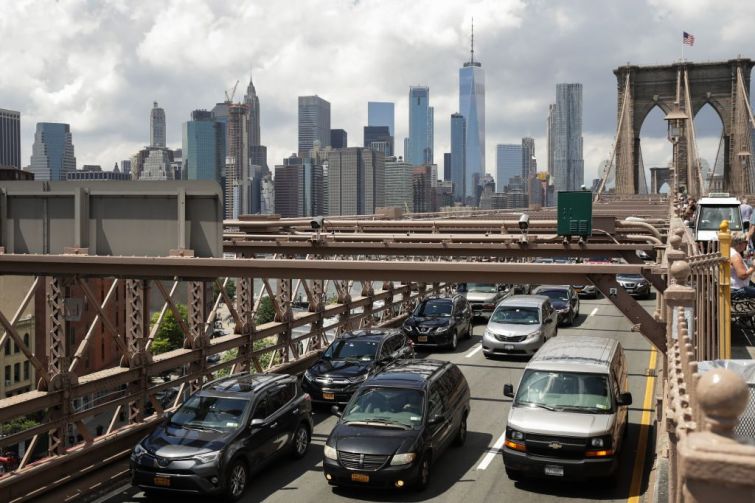 People may not be returning full time to their offices, but it sure feels that way on the roads. Traffic on New York bridges and tunnels this summer has nearly surpassed levels measured before the pandemic.

In June, the Metropolitan Transportation Authority recorded 27.9 million trips across its nine bridges, just below the 28.1 million vehicles that crossed its bridges in October 2019, MTA data analyzed by The City showed.

The Port Authority of New York and New Jersey had a similar bounce in traffic. There were 10.2 million trips in May over its six crossings, which was the most vehicles its bridges and tunnels had seen since December 2019. Each span experienced an increase in traffic between April and May.

The George Washington Bridge had the most trips of any crossing in the region with nearly 4.4 million crossings in May, which was about 1.3 million more trips than were recorded in February, Port Authority data shows.

The city’s three East River bridges — the Brooklyn Bridge, the Manhattan Bridge and the Williamsburg Bridge — were also been jammed, with just over 246,000 Manhattan-bound trips in May, roughly the same as the number of vehicle trips in February 2020, according to New York City Department of Transportation data analyzed by The City.

The rise in traffic congestion on state and local streets has sparked calls from Mayor Bill de Blasio and Democratic mayoral nominee Eric Adams for the MTA to implement its congestion pricing system to reduce gridlock throughout the city by charging most drivers for entering Manhattan’s central business districts.

“New Yorkers are spending too much time in their cars, stuck in traffic. That’s not the way we want anyone to live,” de Blasio said on July 20. “Once we have congestion pricing, we’re going to help to stop the gridlock and help New York City to move around, and get $15 billion coming to fix the subways once and for all.”

Some New Yorkers and suburbanites have returned to taking city subways and commuter rails, but not enough to offset congestion on the roads. Subway ridership during the third week in July ranged from 1.4 million on Sunday, July 25, to 2.6 million on Thursday, July 22 — well above the subway’s nadir during the first few months of the pandemic, but still more than 53 percent below passenger levels two years ago.

The paltry transit levels may continue through the fall as 1 in 3 Manhattan workers don’t anticipate coming back to the office after Labor Day, a Partnership for New York City survey showed. And rising COVID cases from the highly transmissible Delta variant could extend employers’ remote work plans for several weeks or longer, with Apple already pushing back its return to the office to October because of it.

Meanwhile, MTA leader Pat Foye is departing at the end of the month as the agency grapples with how to implement congestion pricing, pay for crucial upgrades, and lure back millions of riders. Gov. Andrew Cuomo wants to restructure the MTA by splitting Foye’s chairman and CEO position into two jobs, but the state Senate blocked the plan and the two sides are in a stalemate.