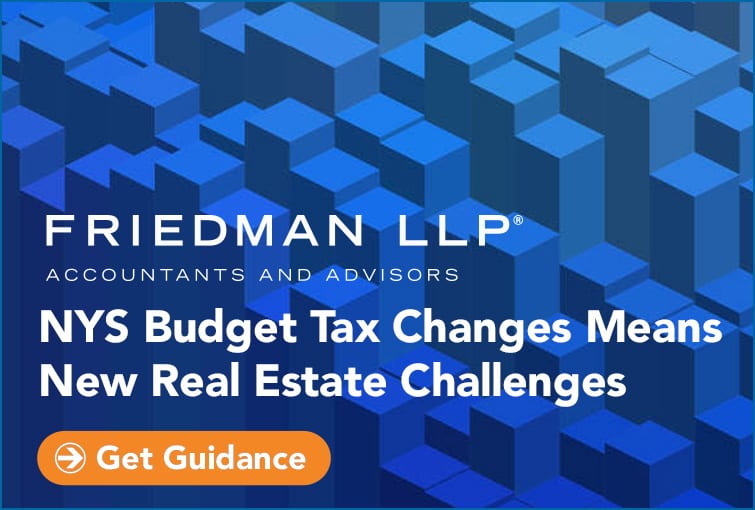 New York’s recently enacted fiscal 2021–22 budget legislation introduced a myriad of significant state income tax changes that will affect many New York individuals and businesses alike. The legislation is intended to help jump-start the state’s economy by providing a number of tax breaks and incentives to middle-class families, and certain businesses in the food and hospitality sectors.

But not everyone is a winner. High-income individuals and the real estate industry, in particular, are likely to bear the brunt of the cost of Gov. Andrew Cuomo’s tax plan.

The comprehensive budget legislation, enacted in April 2021 and generally effective commencing with the 2021 tax year, includes several changes to the personal income and corporate franchise tax laws. Combining these with New York City’s tax rates will result in some of the highest tax rates in the country.

Second only to financial services, the real estate industry is one of the largest business segments contributing to New York state’s gross domestic product (GDP.)  Most real estate ventures are commonly organized as partnerships comprising individuals, businesses and institutional investors — all of which are likely to be impacted by the state’s tax law changes.

Starting with the 2021 tax year and extending through the end of 2027, high-income earners will experience an increase in their personal income tax rates. Prior to the state’s tax law changes, the top marginal tax rate was capped at 8.82 percent.

Both the increases in the personal and corporate tax rates are — at least, currently — intended to be temporary, with the personal income tax rates expiring after 2027 and the corporate tax rates sunsetting after 2023. New York individuals and businesses generating a significant amount of their income from interests in real estate ventures — whether rental income, carried or promote interests, or capital gains — are likely to be some of the hardest hit.

Further complicating matters is the state’s separation from the federal Opportunity Zones program, which defers the recognition of capital gains for eligible taxpayers who make an equity investment in a qualified opportunity fund. Such funds are generally an investment vehicle organized as a partnership, or, in some cases, a corporation.

Although the increase in the tax rates and the decoupling from the federal Opportunity Zones program appear to be a direct blow to high-income earners and those active in the real estate industry in general, all is not lost.

Following on the heels of recently issued guidance from the Treasury Department, the budget legislation created a new, elective pass-through entity (“PTE”) tax regime. This effectively circumvents the $10,000 cap on the federal deduction for state and local taxes (“SALT”), which was enacted under the Tax Cuts and Jobs Act of 2017.

Starting with the present tax year, owners of pass-through entities — such as partnerships, limited liability companies (LLCs), and S corporations — may make an election to be taxed at the business level, which, for federal income tax purposes, are not subject to the SALT cap limitation. The electing pass-through entity will generally compute its business income and pay a state income tax, while retaining certain pass-through features, including a state tax credit for use by owners of the electing PTE when filing and paying their state personal income tax returns.

The tax rates on the taxable income of electing PTEs range from 6.85 percent to 10.90 percent, which generally mirrors the state’s new personal income tax brackets. Electing pass-through entity owners are allowed a refundable credit against their personal income tax, based on each owner’s distributive share of the PTE tax paid. In addition, PTE owners may claim credits for multiple electing PTEs.

So, while New York taxpayers will generally see an increase in their state tax expense, under the new PTE tax regime, there is likely to be some measure of relief from a federal income tax perspective.

Overall, the new legislation poses some new challenges to those in the real estate industry, and taxpayers are encouraged to consult with their tax advisors regarding the effects the recent changes may have on them.

If you have any questions about your obligations under New York’s new tax statues, contact Christian Burgos at CBurgos@friedmanllp.com or (332) 216-0760.