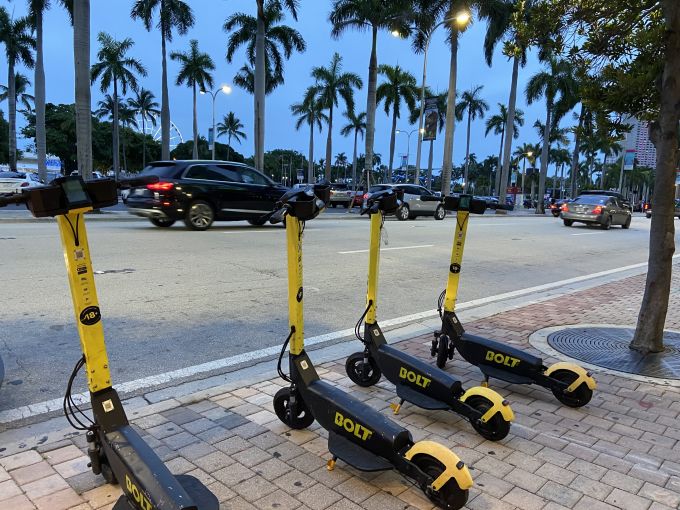 Bolt is among the companies renting scooters in downtown Miami. Jeff Ostrowski

Miami’s experiment with electric scooters has gotten off to a rocky start. Three times in recent years, city officials have imposed monthslong halts on rentals of the trendy vehicles.

Now, city officials are shooting for a tricky balance. They aim to rewrite regulations in a way that keeps scooters available to commuters, but off limits to teen joyriders.

Scooter programs let users rent on demand, then drop the scooters off at designated spots in Miami’s urban core. They’re all the rage among proponents of “micromobility,” who pitch the vehicles as an eco-friendly alternative to cars for short trips. But, as scooters have flooded city centers, growing pains have followed.

“Scooters are controversial in every city where they launch,” Leo Vera, co-founder and chief financial officer of Swiftmile, a provider of scooter-charging stations, told Commercial Observer. “Half the people love ‘em, half the people hate ‘em. Miami is not an exception.”

The upside? The trendy rides offer a simple way to get around the city. The downside? Rainbows of scooters littering downtown, Brickell and Wynwood.

The first order of business, scooter operators and business leaders say, is winnowing the field. While many cities throughout the nation limit the number of scooter vendors, Miami’s market has been wide open. Too open, said Evelio Medina, founder and chief executive of the Downtown Miami & Brickell Chamber of Commerce.

“It’s a total mess,” Medina said. “There are too many of them. They’re thrown all over the place. People are tripping over them.”

Even scooter operators acknowledge that Miami’s scooter program is something of a free-for-all. As many as nine companies — including Bird, Bolt, Hellbiz, Jump, Lime and Lyft — have fleets numbering in the thousands in town. Too much competition has led to chaos, many in the scooter industry argue.

“I actually can’t think of any major city, or even second-tier cities, where you have seven or eight players,” Wayne Ting, Lime’s CEO, told Commercial Observer. “Miami is the only major city with this many operators.”

“There are too many operators fighting for the same public space,” Dominick Tribone, Lyft’s general manager for bikes and scooters, agreed.

Miami’s scooter journey began in 2018, when the first two entrants, Lime and Bird, were forced to halt operations after they blanketed the city with unregulated scooters.

City commissioners took a stab at imposing some order on scooters, and the vehicles returned to the city’s streets a few months later. Since then, the fits and starts have continued.

Responding to fears that shared scooters could spread COVID-19, the city again shut down scooters for months during the coronavirus pandemic, and resumed operations last fall. Shortly after, in December, amid complaints about underage riders, scooters speeding down sidewalks and being left strewn about, the city banned the vehicles again.

Scooter operators were allowed to resume renting this year in one commission district, the zone that includes downtown, Coconut Grove and Edgewater.

But no one thinks the city has solved its scooter mess just yet. In the latest attempt at establishing order, the city commission is expected to ask operators to respond to a request for proposals that would limit the number of providers to just a handful.

“There are ways to do this correctly,” Swiftmile’s Vera said. “The solution is to allow fewer companies and to take regulation more seriously.” Swiftmile recently partnered with the city of Miami to bring 100 scooters charging stations to the city by the end of the year.

Scooter companies say paring down the field will lead to fewer complaints from pedestrians (who fear being buzzed by scooters on sidewalks) and merchants (who don’t want an unwieldy pile of scooters out front). They argue that city officials will be able to more effectively police a smaller group of vendors. And, they say, less competition will boost vendors’ profitability and, therefore, give scooter companies more resources to devote to tasks, such as cleaning up after renters who ditch their rides in the wrong spots.

Scooter operators have taken steps to address some of the common concerns.

One common gripe in Miami: Too many underage users are joyriding on the vehicles. Scooter operators say they have tightened up access, requiring renters to swipe IDs that prove they’re at least 18 years of age. In another shift, operators say they no longer allow one user to rent multiple scooters at a time, a loophole that often led to underage riding.

An additional complaint is that users ignore designated parking areas and dump their scooters wherever. The scooter companies have hired workers who patrol city streets for errant vehicles.

The third common objection — riders using sidewalks rather than streets — might be the hardest to solve. Miami is a notoriously car-centric city, and many scooter riders prefer sidewalks instead of competing for pavement with speeding cars.

“The rules are to not ride on the sidewalk, but that’s not always practical,” Vera said.

Miami’s urban core simply lacks the bike lanes that would allow scooter riders to feel secure enough to move off of sidewalks and onto streets.

“The most important thing is bike infrastructure,” Lime’s Ting said. “Nothing works as well as protected bike lanes.”

Miami collects fees from scooter operators, and the city has used money from its scooter program to add some bike lanes. Alas, those improvements have come to just a fraction of downtown streets.

Meanwhile, scooter operators insist that limiting competition won’t send prices soaring, though that could depend on the number of competitors left on the field.

At the moment, the glut of scooters downtown has kept prices stable, with operators charging $1 to unlock a scooter, plus 15 cents a minute.

Ting says the ride-sharing business serves as evidence that only two rivals are required for cut-throat price competition. Ride-share companies Uber and Lyft have competed on price for years.

Scooter operators insist that their business model not only is legitimate, but is also a crucial solution to traffic congestion. Downtown Miami is in the midst of a yearslong building boom that has seen new residents and workers flood into the area.

According to research by Brookings, Miami had the fastest-growing population of any major downtown over the past two decades. Miami’s urban core posted population growth of 203 percent from 2000 to 2018.

Those kind of numbers underscore the need for transportation options other than cars. Scooter providers say their vehicles fit the bill.

“We want to promote the use of micromobility for short trips,” Vera said. “Taking an Uber a mile or two does nothing to reduce congestion or emissions.”

While the sudden popularity of the vehicles screams fad, scooter operators say their vehicles aren’t just a plaything. Commuters already are embracing scooters as a quick and convenient way to take short trips.

“The image that comes to people’s minds is scooters joyriding to bars,” Tribone said. “It’s not just a toy for people at bars. It’s a real micromobility solution.”

Scooter stands near downtown train stations and bus stops illustrate the potential of the vehicles to address last-mile transit challenges. And proponents also see the lightweight vehicles as a meaningful way to address climate change.

“The No. 1 source of carbon pollution in the United States is transportation,” Ting said. “We’re moving 200-pound humans with 5,000-pound cars.”