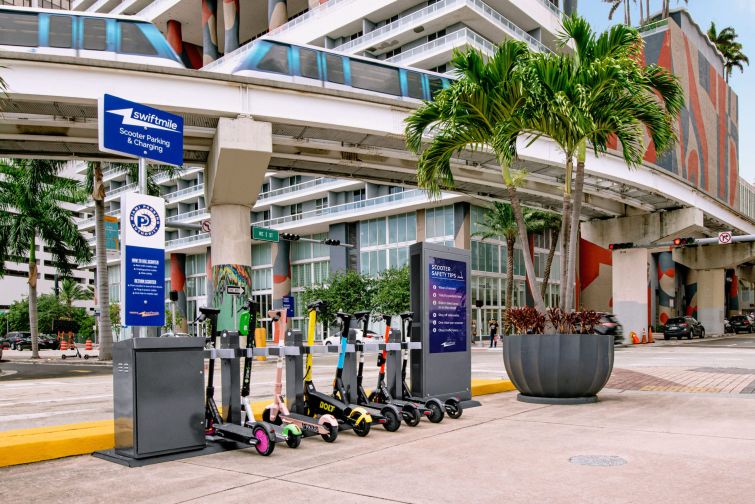 Amid a boom in micromobility options in Downtown Miami, the Miami Parking Authority is touting an ambitious partnership with Swiftmile, an operator of charging stations for electric scooters and electric bikes.

The California-based Swiftmile aims to open 25 of its hubs on Miami Parking Authority properties this month. The new stations will be in District 2 — an area that includes downtown, Brickell and Wynwood — and the only section of the city where scooters are allowed.

Ultimately, Swiftmile plans to deploy more than 100 of its charging stations in Miami by the end of 2022. Those hubs would offer the capacity to charge 3,200 scooters a day.

Swiftmile’s Miami hubs will be equipped with solar panels. Each station also will include a digital screen that generates revenue for the Miami Parking Authority by displaying ads from local businesses and national brands.

The investment in scooter infrastructure comes amid concerns about too many scooters cluttering downtown sidewalks, and too many underage users joyriding on the vehicles. The city suspended scooter operations in late 2020 and early 2021, before allowing them to resume in February.

“Whether you’re a scooter rider or scooter skeptic, Swiftmile Hubs are a win for everyone in the City of Miami,” Swiftmile CEO Colin Roche said in a statement. “This is a city of ingenuity, and we’re excited to join fellow innovators in making Miami more sustainable, tech-forward and ultimately clutter-free.”

Miami has been unusual in allowing all comers to rent scooters in the city. While most cities limit operators to a handful of providers, in Miami, as many as nine companies — including Bird, Bolt, Helbiz, Jump, Lime and Lyft — have brought fleets totaling several thousand scooters to downtown. Too much competition and too little regulation has led to chaos, many in the scooter industry argue.

“I believe in e-scooters as a viable transportation alternative, but in order for it to succeed, we must balance easy access to micromobility with organized hubs that help keep the sidewalks clear for pedestrians,” Miami City Commissioner Ken Russell said in a statement. “By inviting Swiftmile to our city, we are one step closer to unlocking a future that does not require daily personal car use.”

Swiftmile Hubs are already deployed in cities including Pittsburgh, Washington, D.C., and Berlin.