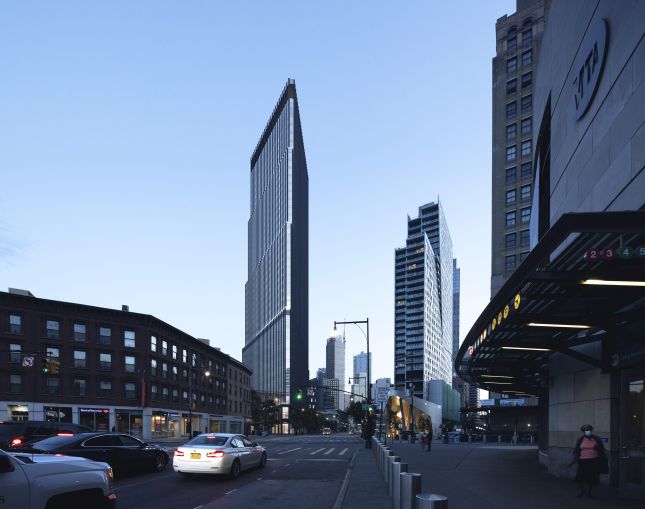 A rendering that shows a view of the Alloy Block development from Atlantic Terminal in Downtown Brooklyn. Courtesy: Alloy Development

Alloy Development has locked in $240 million in debt financing from a lending triad to begin construction on the first phase of its Alloy Block development in Downtown Brooklyn, the developer announced Monday.

Goldman Sachs, Related Companies and Ares Management have combined to extend the $240 million construction financing package, Crain’s New York Business first reported. The New York City Educational Construction Fund (ECF) — a partner of Alloy’s in the development — also issued $152 million worth of bonds purchased by Barclays to fund the buildout of two public, passive house schools on the site, which are part of the development’s first phase. Construction is expected to start before the end of this month, with the first phase slated to wrap up by 2024, according to information from Alloy.

The deal will help facilitate the construction of the city’s first all-electric residential tower at 505 State Street. The building will also include 30,000 square feet of retail space at 100 Flatbush Avenue, as well as two public schools built under a passive house design, which emphasizes mechanical air ventilation and enhanced energy efficiency.

“Sustainable, inclusive residences are the future of New York City, and we are proud to invest in the Alloy Block’s all-electric, mixed-income, mixed-use tower that will become the new model for environmentally-conscious urban living,” Related Managing Director Alfred Trivilino said in a statement.

Ares Partner Andrew Holm said the firm’s decision to participate in the financing underscored its “commitment to corporate sustainability by investing in public-private partnership opportunities that generate positive environmental and social impact.”

The residential tower will soar 44 stories tall and 480 feet above Downtown Brooklyn, and will feature 441 apartments — 45 of which have been designated as affordable — with rents starting as low as $750 per month, per Alloy’s announcement of the financing. Alloy has partnered with Brooklyn community development nonprofit Fifth Avenue Committee to organize the buildout of the residential portion of the two-phase project.

The two schools that will be nestled in the shadows of the residential skyscraper are the Khalil Gibran International Academy (KGIA) high school at 380 Schermerhorn Street, and an adjacent elementary school at 489 State Street that should handle around 500 students, per the developer’s website. KGIA will move to the other side of the block from its current location at 362 Schermerhorn Street to be incorporated within Alloy Block.

When fully complete, Alloy Block will feature a mix of five older, redeveloped buildings and new builds. There will be the two schools, 850 apartments — about 200 will be affordable units — around 200,000 square feet of office space, 40,000 square feet of retail space, and more than 500 bicycle parking spaces. The second phase will see a massive, mixed-use residential, office and retail tower rise 840 feet above Brooklyn’s commercial hub.

“We are committed to making Brooklyn beautiful, sustainable and equitable, and as the city recovers from the pandemic, we hope the Alloy Block will set the standard for progressive, thoughtful development,” Alloy CEO and founder Jared Della Valle said. “When it comes to taking the environmental impact of buildings seriously, building truly affordable housing in wealthy, transit-rich neighborhoods, and creating healthier school environments, we are proud to play a leading role as we begin construction on the Alloy Block.”

The broader development sits across from Brooklyn’s Barclays Center and Atlantic Terminal, one of the most heavily trafficked transit hubs in the city. The project gained approvals by the city in the fall of 2018.

Mack Burke can be reached at  mburke@commercialobserver.com.