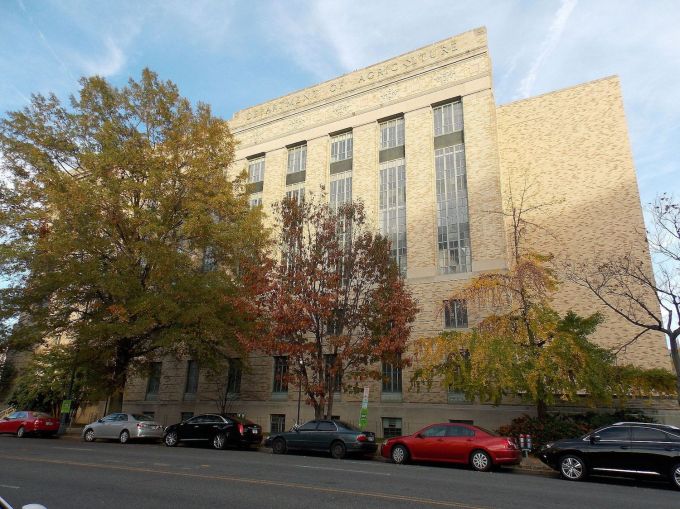 The Cotton Annex on 12th Street SW in Washington, D.C. is listed on the National Register of Historic Places. Photo: By Farragutful/Wikimedia Commons

Carmel Partners has acquired the Cotton Annex, a historic office building in Washington, D.C., from Douglas Development for $45 million, according to the Washington Business Journal.

Located at 300 12th Street SW, the 120,000-square-foot, former government property — once known as the Bureau of Agricultural Economics building — was acquired by Douglas Development for $38 million during an online auction held by the General Services Administration (GSA) in 2017.

In January, the development company received approval from the Commission of Fine Arts to convert the space into 615 residential units, 1,300 square feet of retail and 93 below-grade parking spaces.

The property, which was originally built in 1936, was utilized for the classification and standardization of cotton and tobacco, but has been vacant for years.

“Since acquiring the building in 2017, we were able to fully execute our business plan, converting what was once a vacant space to a mixed-use development of great value,” Norman Jemal, Douglas Development’s managing principal, told Commercial Observer. “As we enter in the latter half of 2021, we decided to sell Cotton Annex to seize new opportunities in the current market.”

Based in San Francisco, Carmel Partners has a growing portfolio in the D.C. area, with 11 communities totaling 865 units, including The Argonne at 1629 Columbia Road NW; Sarbin Towers at 3132 16th Street NW; and Park Marconi at 3150 16th Street NW.