Shoppers Return to American Dream Mall — Will There Be Enough Foot Traffic? 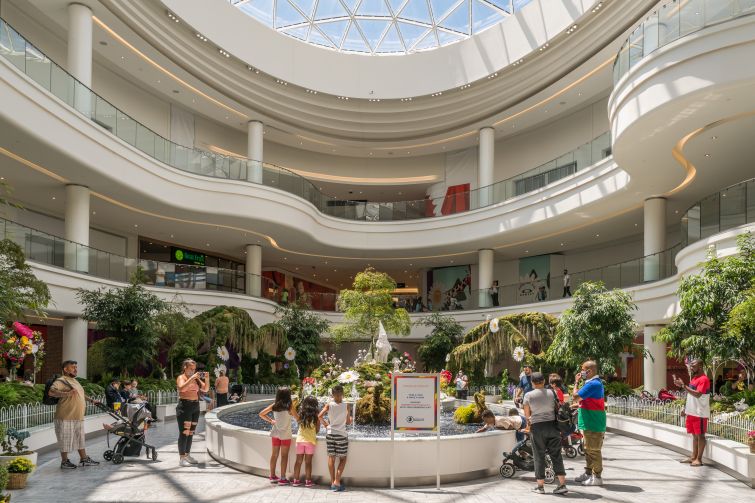 Shoppers have started to flock to the American Dream mall. But will the $5 billion attraction heavy site attract enough repeat customers to make it a success? Photo: Cameron Bleylock/for Commercial Observer

The American Dream mall might not be as much of a nightmare as it looked last year.

Triple Five Group’s 3.1 million-square-foot megamall on the side of the New Jersey Turnpike weathered nearly two decades of construction, a major retail contraction, plenty of jokes at its expense, and a global pandemic that further battered retail and caused the mall to temporarily close just six months after it opened. But new attractions have started to open and people are actually visiting what’s now the second-largest mall in the country.

“It looks super successful by all traditional metrics of going there, and counting people and counting shopping bags,” said Chase Welles, a broker at SCG Retail, who recently toured the spot. “It way exceeded expectations … The place is only half open and busy.”

American Dream closed on March 16, 2020, as stay-at-home measures were put in place around New Jersey, and reopened in October with a DreamWorks-themed indoor waterpark, mini-golf, an indoor ski slope, a Nickelodeon-themed indoor amusement park, and some shopping. Earlier this month, a 25,000-square-foot indoor aquarium and a Lego playground opened in the East Rutherford mall.

And all those people flocking to the attractions — which each command about $80 for a ticket — mean retailers want to sign deals. Welles said that he’s had multiple clients, mainly restaurants, clamoring for space in the American Dream mall.

Plus, despite the dip in the retail market and landlords across the region offering discounts for space, Triple Five has been holding firm on rents at American Dream.

A broker, who asked to remain anonymous, said the mall is still commanding asking rents close to ones in Manhattan, and even had deals fall apart when Triple Five refused to budge on the numbers.

“They’re not giving deals away by any means,” the broker said.

But, while American Dream might have some positive momentum going for it, it’s not completely out of the swamp. A Triple Five executive said three months ago that it would’ve been better, financially, if the project burned to the ground, and the company recently lost its head of leasing, Sandi Danick, credited with getting American Dream to where it is today.

“[Danick] really did a phenomenal job; she was really the greatest brand ambassador,” a source told Commercial Observer. “Losing her is losing your secret sauce.”

Triple Five declined to comment for this article and on Danick’s departure. Danick could not be reached for comment.

The Ghermezian family-led Triple Five is still carrying $5 billion in debt, too, mainly due to the American Dream mall’s construction, and was hit with two dozen construction liens against the project.

Meanwhile, malls across the country, even ones not mired in debt, with large chunks of them still unopened, face a tenuous recovery post-pandemic.

The asset class was one of the most challenged pre-pandemic — with a genre of YouTube videos dedicated to touring eerie, dead malls across the country — and had to deal with months of closures as states instituted emergency measures to halt the spread of COVID-19. In the wake of the pandemic, retailers have filed for bankruptcy, closed outposts in malls across the country, and withheld rent to landlords.

Mall giant Simon Property Group had its worst quarter in nearly a decade in the second quarter of 2020, and lost more than $1 billion in revenue last year. Last year, Simon was planning to give up control of four other struggling malls around the country, and, in February, its lender, Deutsche Bank, foreclosed on Simon’s Town Center at Cobb mall in Atlanta and took it over.

And, earlier this month, mall owner Washington Prime Group filed for bankruptcy to try to deleverage its balance sheets by nearly $950 million.

“There’s definitely a subset of malls that were deteriorating pre-pandemic that, during the pandemic, deteriorated further and lost more tenancy,” said Thomas Dobrowski, Newmark’s mall expert. “Then, there are other malls that have recovered. It’s on a very case-by-case basis, where you have to look at each mall individually.”

As for Triple Five, the developer faced cash problems during the pandemic, and is likely to lose its 49 percent interest in the Mall of America in Minnesota and West Edmonton Mall in Canada, because it used them as collateral for a $1.2 billion construction loan to build the American Dream mall.

“It would have been much better if American Dream would have burned down or a hurricane had hit it, financially, because we would have been covered by insurance,” Kurt Hagen, an executive at Triple Five, said during a Bloomington, Minn., city council meeting in March, according to Bloomberg. “This pandemic, that we didn’t see coming, has not been covered and was the worst scenario imaginable.”

American Dream boasted that its retail section was 90 percent leased in January 2020, but it lost several tenants during the pandemic. Barneys New York and Lord & Taylor ditched their American Dream outposts pre-COVID, and GNC plans to walk away from its spot after it filed for bankruptcy last year.

Forever 21, The Children’s Place and Victoria’s Secret are also considering getting out of their American Dream leases or shrinking their footprints, NJ.com reported. And Triple Five sued Korean barbecue eatery Dons Bogam last year after it allegedly hadn’t taken steps to open in the mall, according to NJ.com.

“We are going to come out of this super-strong … really strong on the entertainment side,” Ghermezian told CNBC last year. “I think when [the pandemic] is over, people will be so stir-crazy. Initially, there will be some trepidation … but I think we are going to have so many people.”

With rising vaccination rates and states rolling back restrictions, Ghermezian might not be too far off the mark, as people have started to flock to malls in recent months.

“The reopening across the country has been very positive for retail, but definitely we are seeing malls benefit from pent-up demand,” Dobrowski said. “We are seeing a pretty big uptick in activity across the sector.”

Retail sales across the country have been steadily creeping up, with May seeing a total of $620 billion in sales, a 36.2 percent increase compared to the same time last year, according to a report from the U.S. Census Bureau.

American Dream posted $54 million in sales in 2020, with $39 million of that gathered in the fourth quarter alone, Bloomberg reported. Municipal bond buyers confident in its recovery have been snapping up American Dream’s bonds, and the number of those buyers has grown by more than 20 percent as of February, according to Bloomberg.

Foot traffic data that analytics firm Placer.ai provided to CO show that the number of visitors to American Dream has steadily increased since it reopened in October, and was up 3.7 percent between April and May, thanks to a huge spike during Memorial Day weekend.

“I think there’s so much pent-up demand for experiences that, of course, people are going to flock to the American Dream mall,” said luxury retail consultant Soozan Baxter, “especially when you have days that are rainy or scorching [hot] and you had to tell them all year that you have to do remote learning and you’re homebound.”

Aside from the bond buyers and visitors, American Dream got another vote of confidence when Saks Fifth Avenue announced its plans to finally open its outpost in the mall in September. It will be the retailer’s only New Jersey location, Forbes reported.

That also bodes well as the luxury market has also been seeing huge sales in recent months, with some luxury shops experiencing “ridiculous lines like you’ve never seen before,” Baxter said.

It might seem, then, that American Dream could be a success after an especially long and tortured history. The project began its life as Xanadu in 2003, when Mills Corporation and Mack-Cali Realty won the development rights from the State of New Jersey for a 162-acre patch of wetlands next to Giants Stadium (now known as MetLife Stadium).

The developers quickly blew past their initial budget estimate and, after Mills encountered financial woes, sold Xanadu to private equity firm Colony Capital for $500 million in 2006. Colony soon hit snags itself, leaving a garish, multicolored structure in its wake. Then-Gov. Chris Christie stepped in and in 2011 awarded Triple Five the task of completing the mall, mainly because of its success with the Mall of America in Minnesota.

Construction restarted in 2014 and American Dream finally opened in September, of 2019 just six months before the pandemic.

Now, even though visitors have started returning since the mall’s October reopening, having them come back is a different story.

“It’s like a restaurant,” Baxter said. “Anyone can get you through the door. The question is: Are you going to come back a second time? They’ll need to have a lot of repeat traffic.”

So far, American Dream has mainly had to rely on locals in New Jersey to drive foot traffic, but that might not be sustainable long term for a project of its magnitude. An expert previously told CO it would need about 40 to 50 million visitors a year to be a success, and Triple Five told NJ.com that it attracted more than 790,000 visitors from October 2019 until January 2020, but it’s unclear how many people are expected to visit this year.

“I think with the American Dream, the question is going to be: What does the foot traffic look like during the week?” Dobrowski said. “As a weekend destination, it’s going to do great. But what does the consumer base look like Monday through Friday?”

American Dream would need to rely on a steady stream of tourists coming in during the week to survive and, with travel not fully back, it’s unclear if they’ll be willing to brave the trek from Manhattan to East Rutherford, Dobrowski said.

And, even though malls have seen a surge in visits, that might wear off as other activities and travel become an option again. While May’s U.S. retail sales were a huge improvement compared to 2020, they dropped by 1.3 percent compared to April, the first time in two months that the metric saw a dip.

“The big question will be: What’s the sustainability for consumer demand for spending over the next six to 12 months?” Dobrowski said. “That will be a big barometer for the trajectory of malls.”