A Dream Deferred: American Dream Mall Struggles During the Pandemic

The American Dream Mall has waited and waited (and waited) to open. It’s got a lot more waiting to do. 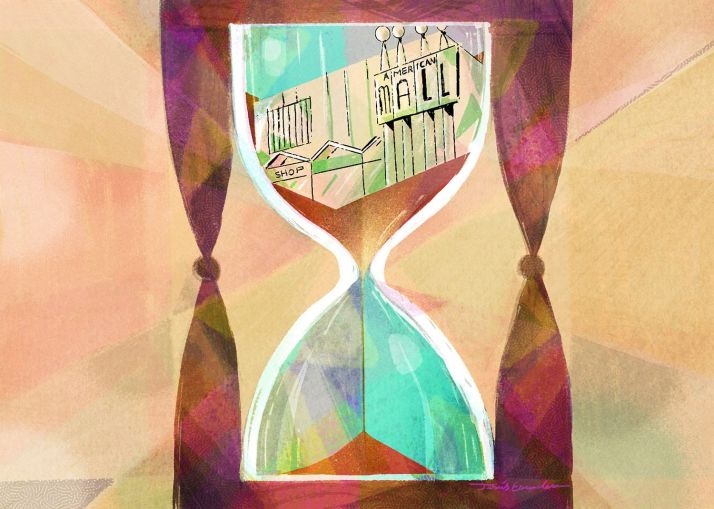 The American Dream mall only opened for about six months before being forced to shutter because of the coronavirus. It still has yet to set a reopening date. Illustration: Jesus Escudero

It took the American Dream mall nearly two decades to open up its doors. But they only remained open for six months.

The coronavirus pandemic forced developer Triple Five to close what little it opened last year of the 3.1-million-square-foot American Dream mall in East Rutherford, N.J., on March 16 as strict stay-at-home measures were put in place across the country. Triple Five also pushed back the debut of the more than 1-million-square-foot retail portion set to open in March.

Four months into the pandemic, Triple Five has yet to set a reopening date for the megamall’s indoor amusement park, while problems keep piling up for the developer. Some retailers that had signed on to take space filed for bankruptcy and will abandon their planned storefronts. Contractors filed construction liens on the project. The value of its bonds tanked. All this while the developer is mired in billions of dollars of debt.

“It was probably a good idea 20 years ago,” said retail consultant Kate Newlin. “But I don’t think it was a good idea pre-COVID, and I really think it’s crazy now.”

But even with the mountain of issues and retail reeling because of the pandemic, many haven’t counted out Triple Five’s ability to turn the American Dream around.

“If there was any other landlord doing it, I would say, ‘Oh, my gosh, game over,’” luxury retail consultant Soozan Baxter said. “[Triple Five co-CEO] Don Ghermezian is a very creative guy, and I think them not being a publicly traded REIT certainly takes a lot of pressure off of them.”

Plus, New Jersey malls haven’t faced as much distress as other markets, and the site is relatively close to New York City (barring you don’t get stuck in traffic).

Publicly, Triple Five, who did not respond to requests for comment, has stressed that it will reopen and is poised to come out of the pandemic on top. To help survive the new post-COVID world, Triple Five switched the balance of the mall from 55 percent entertainment and 45 percent retail to 70 percent entertainment and 30 percent retail, CNBC reported.

“We are going to come out of this super strong … really strong on the entertainment side,” Don Ghermezian told CNBC in April. “I think when [the pandemic] is over, people will be so stir crazy. Initially, there will be some trepidation … but I think we are going to have so many people.”

The switch could be a way to address the flailing retailers who have been battered by the pandemic, with the country hit with the lowest monthly retail sales figures in history in April, but Dobrowski also expects there to be some pent-up demand for entertainment options from locals cooped up at home for months but unwilling to jump on an airplane to Disney.

“That’s a silver lining here that you may have a more captive base for potential customers,” he said. “You may see more demand than you would’ve and the opportunity to lure in more customers.”

However, Ghermezian’s strategy essentially ignores (and might even compound) another essential part of the COVID-19 problem: entertainment (read: experiential) has been the most restricted part of retail since the crisis began, and it’s difficult to see an end in sight absent a vaccine. As coronavirus infections spike in other parts of the country, many parents in the tri-state area will hesitate before visiting an enclosed amusement park, since research has shown the virus spreads easier in crowded indoor spaces.

Parents have “taken corona very seriously; they’re taking the idea of sending their children back to school very seriously,” a retail consultant, who did not want to be named for fear of losing business, said. “The idea of going into a crowded amusement park, even with precautions in place, with young children, seems like a stretch.”

Triple Five already faced an uphill battle to keep the American Dream from turning into a nightmare during a decade-long retail contraction before a global pandemic was added to the mix.

The developer’s grand vision for the $5 billion mall calls for 1.5 million square feet of retail, a Nickelodeon-themed indoor amusement park, a DreamWorks-branded indoor waterpark, a Cirque du Soleil venue, a 16-story indoor ski slope, an ice rink, two hotels and a convention center. (It’s unclear if the plans have changed. Nickelodeon, DreamWorks and American Dream did not respond to requests for comment.)

After nearly 16 years of construction, three developers, five governors and countless missed deadlines, Triple Five opened the first part of its four-phased opening, which it’s calling “chapters,” in October 2019, with the Nickelodeon theme park and the ice rink. In December 2019, it opened the indoor ski slope dubbed BIG Snow.

And things were starting to look up for the American Dream. It attracted more than 790,000 visitors from October 2019 until January, even with just 8 percent of the mall open, Triple Five told NJ.com.

The amount of people coming through the doors kept increasing during the winter, and American Dream had a peak of 90,000 visitors during Presidents’ Day weekend on Feb. 15 to Feb. 17, according to data from location analysis firm Placer.ai provided to Commercial Observer.

Those numbers are still below the 100,000 visitors per day Triple Five hopes to attract when fully open and below the amount some nearby competitors attract. From January until March 9, American Dream had an average of 73.4 percent fewer visitors than the 2.1-million-square-foot Westfield Garden State Plaza, according to Placer.ai.

In March, American Dream was slated to open the doors on its indoor waterpark after four months of delays, along with portions of its retail and food component, which was expected to boost the number of visitors, according to Placer.ai. That is until the coronavirus pandemic came along.

Since shuttering in mid-March, Triple Five has yet to set a return date for the already opened portions of the mall or for when the waterpark and retail will launch. While it said it leased out 90 percent of its retail space, some of its tenants don’t seem to be in any rush to open while others might not be around long enough.

Forever 21, The Children’s Place and Victoria’s Secret are also considering getting out of their American Dream leases or shrinking their footprint, NJ.com reported. Meanwhile, Gap and Banana Republic — which leased space in the mall — are facing multimillion-dollar lawsuits from two major mall owners for not paying rent.

Triple Five took to the courts themselves during the pandemic and sued Korean barbecue eatery Dons Bogam for breach of contract in June after it allegedly hadn’t taken steps to open in American Dream, according to NJ.com. The New York City-based restaurant group was expanding into New Jersey from its three Manhattan locations.

And during the pandemic, Triple Five’s $1.1 billion tax-exempt revenue bonds for American Dream have decreased in value.

Last year, its bonds traded with a 4.25 percent yield, but as of July they were trading with a yield of 8.13 percent, causing some investors to flee, according to Daniel Berger, a senior market strategist at Refinitiv.

“It’s a very distressed price,” he said. “That’s not even remotely close to investment grade.”

Triple Five has $5 billion in debt, largely due to the construction of the American Dream mall, and it used the Mall of America and West Edmonton Mall as collateral for its $1.7 billion construction loans, Bloomberg reported. It missed two payments on Mall of America’s $1.4 billion loan since the coronavirus pandemic hit, and the mortgage was transferred to special servicing in March, according to Bloomberg.

Adding to its financial strain, several contractors filed at least two dozen construction liens against the American Dream mall since April, claiming they weren’t paid more than $13 million for completed work, according to NJ.com.

The woes caused by the pandemic adds another chapter to the American Dream mall’s long history, which has more twists and turns than an episode of “The Sopranos.”

American Dream started its life in 2003 as Xanadu, after Mills Corporation and Mack-Cali Realty won the development rights from the state of New Jersey for a 162-acre patch of wetlands in the Meadowlands Sports Complex, next to Giants Stadium.

Mills’ plans for Xanadu were even grander than Triple Five’s. It called for a Formula One-style racetrack, indoor surfing, a minor league baseball stadium, an indoor ski slope, a movie theater, a concert hall, office space, a 520-room hotel, restaurants, a “child-scale city” and 500,000 square feet of retail, The Baltimore Sun reported.

Colony soon hit snags itself when lender Lehman Brothers went bankrupt and cut off the financing, which halted construction, according to the Times. All that was left of Xanadu was a garish, multicolored structure that then-Gov. Chris Christie called the “ugliest damn building in New Jersey.”

Christie’s administration stepped in and, after finding it would cost $50 to $100 million to demolish Xanadu, awarded Triple Five the task of completing the project in 2011, largely because its initial proposal called for a plethora of entertainment options.

“In hindsight, I think we made the right decision,” real estate developer and investor Jon Hanson, who was in charge of the project during the Christie administration, previously told CO. “The success of the American Dream would be the heavy emphasis on the entertainment.”

Triple Five got up to $390 million in tax breaks from Christie and started work, eventually repainting the building’s exterior white. The retail market drastically changed in the time Xanadu was pitched, with traditional mall anchors dropping like flies and customers flocking to e-commerce giant Amazon, yet Ghermezian was still able to convince top brands to sign leases.

“The CEOs were bamboozled by Don,” the retail consultant, who did not want to be named, said. “He is very, very charming. Do [brands] really need to have four outposts in the state of New Jersey? You start to question some of the decision-making that went into this.”

Newlin said the model of trying to target tourists and luxury shoppers by giving them a place to drop off their kids never made much sense, but in a new world afraid of enclosed spaces, and international tourism expected to decline in the city, it’s even harder to justify.

“It’s a concept that they’re dancing really hard to make sense because they’ve invested so much time, effort and other people’s money,” she said. “We learned the hard way what we do and do not need [during the pandemic]. It is not a water ride for my daughter while I go shop. You can’t even say it with a straight face.”

Newlin said that the fact Triple Five has not set a firm reopening date could spell trouble for the project, but Dobrowski argued it’s a smart move because a visitor catching coronavirus while at American Dream would cause “irreparable damage.”

“You only have one shot to get it right,” he said. “If you have the time to plan for this, which they obviously do, you might as well take your time and get all the necessary protocols in place to ensure visitors’ safety.”