LA Market Experts on the Interplay Between Post-Pandemic Trends 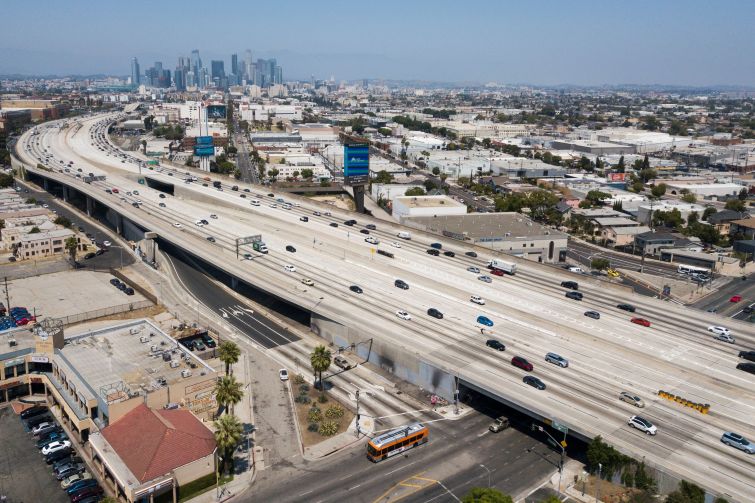 Pandemic-induced changes spanning the Los Angeles commercial real estate market have been a long time coming, as discussed during the May 11 Commercial Observer forum on the future of L.A. real estate.

Emergent trends throughout the City of Angels include a lack of affordable housing, the migration of residents to coastal California towns, the contraction of retail and office spaces, and an increased demand for entertainment.

The panelists accredited this exponential shrinking of office spaces, as well as similar declines in tangential asset classes, to what will most likely be a long-lasting pandemic byproduct: work from home.

“I think we’re underestimating the impact this potential work-from-home hybrid model might have on all of our asset classes that we’re working on right now,” Vogel said, referring to the transportation, travel and hospitality industries as just a few of the sectors hurt by empty offices. “We rely heavily on the office crowd to fill our restaurants and our retail.”

Vogel predicted that work from home will have a big impact on L.A.’s market post-pandemic, but anticipated a full recovery for the hospitality and restaurant industries — the timeline for which, though, continues to be indefinite.

He then touched upon the housing crisis as another trend reliant on supply and demand. “The only way we solve the housing problem is to build more housing of all types: affordable, workforce, all the way up to luxury,” he stated.

But building during the pandemic has proved challenging. Jenkins said that the biggest struggle his firm currently faces is cost, as lumber prices have increased by 300 percent. The reasons for this increase are complicated, with factors like limited access to Canadian timber land and increased lumber tariffs contributing to the sky-high prices. It remains an unknown as to how and when these material costs will decline, leaving the future of construction accessibility up in the air.

Both affordable housing and homelessness have been key problems resulting from the pandemic. Thrash-Ntuk cited a need to reuse and repurpose emptied spaces through relief efforts such as Project Roomkey and Project Homekey. These initiatives provide short-term solutions to revive shuttered hotels and retail spaces to offer shelter for those in need. While she stressed that these initiatives are not long-term, Thrash-Ntuk emphasized how crucial they are in providing temporary relief.

Thrash-Ntuk extended her analysis of relief packages to examine state and local legislation directed toward landlords. Gov. Gavin Newsom currently has plans to recover 80 percent of lost funds to landlords, though the ultimate goal is to provide 100 percent of these payments. Repaying landlords and keeping tenants in their homes helps contain value within individual neighborhoods and stabilize the market.

Yet even with these efforts, the struggle for affordable housing is widespread, and the pandemic has resulted in a migration of residents leaving Los Angeles for coastal towns.

“At a certain point it becomes difficult to attract talent to the city if we don’t have affordable housing,” said Dale Holzer, managing director at Greystone, during another panel entitled, “Multifamily Housing Investment & Development Trends Designed to Welcome a New Wave of Talent.”

Even high-profile real estate centers — Beverly Hills, Hollywood, Koreatown — have endured a commercial decline, and this widespread impact makes moving forward difficult. During the pandemic, L.A. saw many of its residents end leases and move to the city’s outskirts. Chris Nickerson, principal of Cain International, believes this movement is overall beneficial; the dispersion “helps alleviate some of the pressure on the more congested areas of L.A.,” he said.

This panel— which was moderated by Marcela Sapone, CEO and co-founder of Alfred, and also featured Joshua Samaha, associate director of Hanover Real Estate Investors LLC — assessed accessory dwelling units (or ADUs) as a post-pandemic option for expansion. Panelists called for an adaptive reuse of residences that would allow homeowners to add units to their occupancies. ADU legislation in 2009 set the framework for microlevel expansion, and in 2021 the decision to expand is predicted to surge.

In a fireside chat with CO’s Cathy Cunningham, Hessam Nadji, president and chief executive officer of Marcus & Millichap, compared Los Angeles’ current market with that following the 2008 financial crisis. 2008’s TARP stimulus response took 13 months to materialize “to the scale of 6 percent of GDP.” The pandemic response, however, took seven weeks “and the scale of the response was close to 25 percent to 30 percent of GDP.”

“The optimism regarding the economy is tied 100 percent to the health crisis solution,” Nadji said. “At the same time, liquidity injection has played a very important safety net in bringing jobs back, in bringing businesses back to an expansion mode.”

Nadji predicted that the wave of oncoming economic growth and employment opportunities will create a demand for more space that could even trickle down to office buildings. This change won’t happen overnight, but he anticipates that the demand for offices will surge over the next three years.

One change he hopes will never occur is a reversion back to pre-pandemic business operations. In speaking about his own company, Hassem stated: “We want to stay out of our comfort zone. It would be a lost opportunity just to go back to normal now that we’ve learned so much.”

Panelists discussed the increasing demand for entertainment, honing in on digital media and rapid consumption. This demand had already existed prior to COVID-19, but the pandemic saw a surge in media consumption not expected to slow down anytime soon.

Due to the size and scale of entertainment projects, however, entertainment companies have had to look outside the city of Los Angeles, confronting logistical difficulties.

“It’s hard to find properties of scale,” Goepel said. “Now we’re seeing more and more projects pop up outside of that zone.”

Goepel noted that moving outside the city is a last resort, as the industry’s labor unions are centralized in Hollywood. Therefore, the entertainment industry must either adapt to creatively use pre-existing spaces or modernize to create the necessary infrastructure.

This deficit of accessible facilities extends to sporting arenas. “Scale is always a big challenge for stadiums and for practice facilities,” Randolph said. “That becomes a really limiting factor in L.A. where there just aren’t that many sites available.”

Even when the spaces are available, attracting visitors in a post-pandemic world presents its own challenges. Entertainment has existed predominantly within the home for over a year, so Randolph believes that now “the challenge is competing with the big screen TV. You have to provide a reason for people to get out of the house, get off the couch, and actually go to the event.”

To incentivize visitors, he outlined experiences beyond the sporting event itself. Food stands, as well as pre- and post-game opportunities, are a few amenities Randolph hopes will result in increased attendance.

Even with the relative unpredictability surrounding the future of L.A.’s entertainment, business, and housing markets, the panelists resoundingly agreed on the city’s resilience.