Once the most coveted retail drags in the country, the likes of Rodeo Drive, Fifth Avenue and Market Street are grappling with immense challenges — and not all from COVID 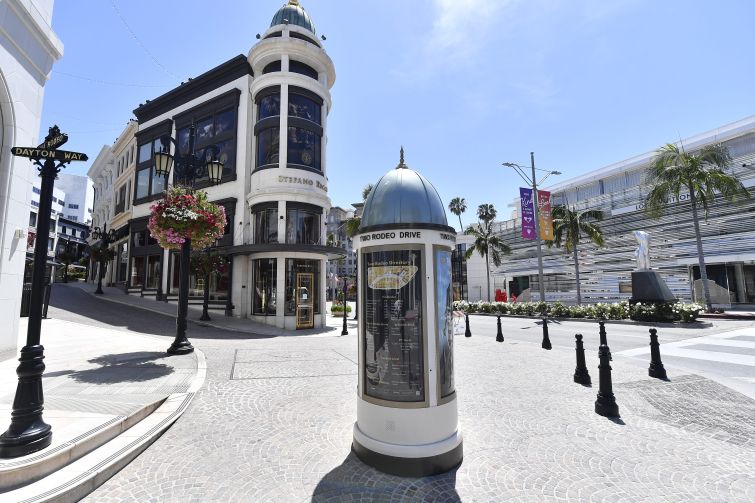 PRODUCT PLACEMENT: Luxury operators were already losing faith in the major flagship store model due to headwinds from e-commerce. Now, some can’t justify the rents they were paying before COVID. Frazer Harrison/Getty Images

But what will be the indicator if the Gucci store can’t survive at such a swanky address?

High streets, such as Rodeo Drive in Beverly Hills or Fifth Avenue in Manhattan, were long considered impervious to the struggles of rocking retail — in a league of their own with brands like Saint Laurent, Gucci, Versace and Prada as tenants — and far better suited to survive downturns.

But the pandemic is a different beast, and high street retail is subject to the same government restrictions as the Beverly Center shopping mall or a bog box Old Navy. Even if they weren’t, hubs from Chicago’s Magnificent Mile to the Bal Harbour Shops in Miami are more dependent than other outlets on tourism, which has been less than fractional since March 2020.

“They’re being just as impacted as everyone else, and, in some instances, maybe even more so,” said B. Riley Real Estate’s Michael Jerbich, who does retail restructuring, including the recent JCPenney bankruptcy.

Now, the destination high street experience is more at risk than ever before. The pandemic exacerbated issues that brands were already facing, and now, experts differ on the future of the famed districts with high-end, brick-and-mortar retail.

Flagship stores are being replaced and brands are adapting their models and ditching those locations for stronger online strategies. It has led to popular secondary markets, as e-commerce catches up to luxury brands and devastates them like they did malls and value brands.

Some still argue the top spots like Rodeo Drive are strong enough to survive and thrive once tourism returns. But, one thing is for sure, high streets are changing.

Lost revenue and unpaid rents caused by COVID regulations have fractured tenant-landlord relationships around the country and killed lease confidence. Landlords are suing tenants for missed rent, and tenants are suing landlords to get out of leases. And some experts expect it’s just the beginning.

Hudson’s Bay, for example, is struggling across the board. A year after selling Lord & Taylor for what experts said was a “laughable” $100 million, the company is missing payments at several locations due to the pandemic. The iconic Beverly Hills Saks Fifth Avenue building is set to be sold at foreclosure due to missed mortgage payments.

Jason Vanslette, a partner at law firm Kelley Kronenberg, said that Saks Fifth is suffering just the same in Miami, where the South Florida market is even more dependent on tourism than places like Manhattan’s Fifth Avenue. But, South Florida is also benefiting from people migrating from cities like New York, Chicago and L.A.

“From a real estate perspective, it’s huge,” he said. “That might mitigate some of the damage loss from international travel.”

Meanwhile, Italian luxury retailer Valentino sued its landlord to get out of its lease at a Fifth Avenue shop because of pandemic losses. Valentino is one of several retailers taking to the courts. In October, Givenchy and its parent company, Louis Vuitton Moet Hennessy, paid $24.5 million to leave its Madison Avenue flagship early after amending the lease terms. That included a $15 million fee for terminating the original agreement. Now, the tenancy will end as early as 2022, instead of the original date of 2029.

Vanslette said there are similar issues with tenants in Miami, and whether or not they have contracts that planned for COVID-type events under force majeure clauses, and whether or not COVID actually hinders their contractual rights. He pointed out that a big difference separating large luxury brands from value brand retailers or private ownership retailers is that the latter might not be able to afford attorneys or advisers to make agreements with such provisions.

“So, the negotiating and leverage positions of these large luxury retailers are a little different than the mom-and-pop,” Vanslette said. “And so are the remedies that they’re experiencing both from a landlord side and a tenant side.”

Jerbich said he expects more trouble ahead, similar to Givenchy.

“We did a [workout] deal for a retailer that was in bankruptcy that had a prominent Fifth Avenue location, and the landlord reduced the rent 55 percent,” he said. “And they locked themselves in for seven years of that. I think you’re going to see a fair amount of that for a little while to come.

“Tourism has fallen so much and tourism represents the bulk of luxury shoppers. Until that comes back, I think that you’re gonna see a lot of issues,” Jerbich added. “With all of these closures, it’s just trying to catch a falling knife on deciding what the market rents are.”

Due to the high prices of the coveted merchandise in these areas, they are also targeted disproportionately during mass looting. Macy’s announced this month that it’s leaving Water Tower Place along Chicago’s Mag Mile after it was torn apart three separate times, sources explained.

“I don’t know how to replace Macy’s,” Jebrich said of the 170,000-square-foot store. “I’m not comparing Michigan Avenue to Rodeo Drive, or Fifth Avenue, or even Market Street. But I think it’s somewhat telling.”

Some luxury retailers or their landlords are finding placeholders or replacements. Sometimes, that’s not so easy.

Last week, Business Insider reported that investors rejected Ralph Lauren’s request to sublease a vacant 8,300-square-foot store to fast-fashion chain Mango for just $5 million per year. It wouldn’t go very far to help make up for the roughly $27 million Ralph Lauren owes per year for the unoccupied space at 711 Fifth Avenue, and investors don’t want to give the keys to Mango, because it doesn’t meet the muster of a “luxury” tenant.

Elsewhere in New York, after filing for bankruptcy in 2019 because of rent hikes on Madison Avenue, Barneys was licensed to Saks Fifth Avenue and opened inside the iconic Saks flagship in Midtown Manhattan. And The Real Deal reported that the Brooks Brothers store at 346 Madison Avenue could be transformed into a 41-story tower, after the menswear brand filed for bankruptcy last year.

In Beverly Hills, LVMH is planning to build a Cheval Blanc Hotel on Rodeo Drive. The deal for that property involved Jay Luchs with Newmark, who said that with department store space that’s struggling off Rodeo, hotels are always looking to get property in Beverly Hills’ Golden Triangle.

“We’re now at a place where, if a department store left, who do you fill it with?” Luchs said. “But there are various ideas — grocery, other retailers, combining flagship with offices, other possilibities.”

There’s no guarantee, either, of one high-end retailer replacing another in areas that lose them. “It might just go to Old Navy and Kohl’s and larger shops,” Vanslette said. “But I think Miami and those in South Florida will survive.”

For decades, all of the top retail companies craved flagship space on Rodeo Drive as a simple and true strategy to establish a distinct luxury brand. Now, the flagship strategy just might not be worth it.

“Some places like Fifth Avenue, that was always a marketing ploy by high-end brands to have a brick-and-mortar spot,” Vanslette said. “But now, they’re really looking more for wall-to-wall profitability. … COVID is really more just a catalyst to that marketing strategy being ineffective.”

Operators were also losing faith in the major flagship store model due to e-commerce headwinds.

“I think a lot of retailers were looking at the landscape, saying that it just can’t justify some of the rents that they were paying before for a flagship store,” Jerbich said. “I think that, pre-COVID, you were seeing a trend to move away from that.”

“Luxury” was already on the decline on Fifth Avenue before COVID-19, and before Mango wanted to sublease.

“Thinking about the stores on Fifth Avenue now is crazy to me,” Jerbich said. “Five Below, Timberland, and Vans all on Fifth Avenue. You would have never seen that five years ago.”

The luxury shopping corridor along Fifth Avenue faced vacant storefronts and declining rents, and Ralph Lauren wasn’t the only brand to close its shop there in recent years. And now, with many restrictions still in place, Jerbich said New York as a whole still feels like a “ghost town” since the pandemic hit.

“Fifth Avenue was mostly tourists,” he said. “But, just the general traffic from offices has declined so significantly, and it seems so cliche to say, but it’s so true that all COVID did was accelerate what was taking place.”

Rents on Manhattan’s retail corridors have hit historic lows amid the pandemic. On Fifth Avenue, the average asking rent hit $271 per square foot, a 22 percent, year-over-year decline, according to a CBRE report.

Tourism declines are decimating places like Fifth Avenue or Market Street or Rodeo Drive, Vanslette said, but iconic stores like Tiffany & Co. on Fifth Avenue aren’t going anywhere, and will probably still garner some of the highest rents.

“It’s the one street where I do think it’s held its own, and you’re not going to see tenants leave,” he said. “It’s a different animal. It does not mean that the luxury brands haven’t felt the pain from the pandemic. But, at the same time, they’re international, and a lot of luxury brands find ways to make up for it in other countries.”

He pointed to the activity on Rodeo Drive despite the spreading coronavirus. He brokered the November sale of Crown Equity and Ascendent Capital Partners’ 457 North Rodeo Drive for $122 million. He also pointed to Chanel expanding on Rodeo Drive by combining two properties that it purchased in the last five years for about 100 feet of frontage.

“There are other examples of big brands on Rodeo Drive, from LVMH to others, that are actually putting more money into the street and doubling their size and really believing in the future,” he said. “If you look at the two- to three-year next steps of what’s happening, it’s pretty incredible. Like, the hotel might take years to build, but there will be a point, and a bright future when they open their doors.”

Luchs also pointed out that brands — including LVMH, Chanel, Hermes and Cartier — have bought property on Rodeo Drive in several cases recently, as opposed to simply leasing. Luchs said that’s a sign of their confidence.

“For there to be a good chunk of the luxury brands buying their own buildings, not only buying them but combining them, not only combining them but wanting them to be big and flagships — there’s a lot to be said in that,” Luchs said. “There’s money to be made. It’s an important city to them, worldwide, that it’s important for tourists and locals. There’s something about L.A. … There’s a need to be here.

“I don’t think there’s too many brands out there that are going to give up on Rodeo Drive,” he said. “If they’re giving up on Rodeo Drive, then their business as a whole is faltering. … In the short term, pricing has been affected. But, in the long term, if a building came on the market and was even-priced, overpriced, it’s still gonna fly off the shelf.”

Vanslette said Miami will always have that high-end luxury need just because of international tourism that will come back soon. As for other high streets, the future is much less certain.