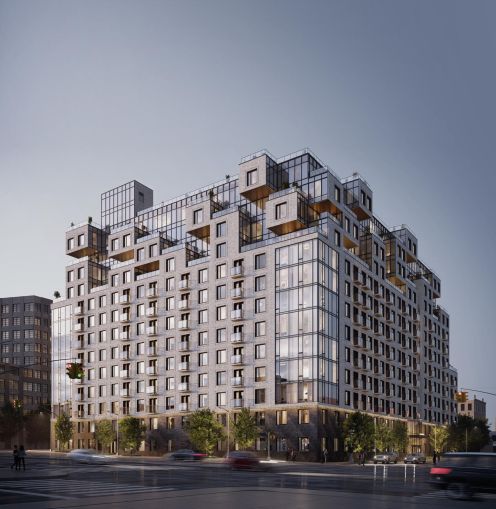 Bruman Realty has landed a $145 million refinance for its multifamily project at 260 Gold Street in Downtown Brooklyn, Commercial Observer has learned.

The loan retires $102.5 million in construction financing on the property, provided by Bank Leumi in 2018.

Some months later, in July 2020, TRD reported that KKR and Dalan Management were teaming up to buy a 14-property multifamily portfolio owned by the firm — including 260 Gold Street as one of the largest portfolio assets. While Bruman Realty remains the owner of the property today, KKR and Dalan have a pre-set purchase option on the asset, sources familiar with the trade said.

Amenities at the J Frankl Architects–designed building — which sits in the heart of Downtown Brooklyn between Tillary and Concord streets and only two blocks from Trinity Park — include a rooftop terrace and outdoor spaces, a pet spa, a fitness center, a game room and 114 parking spaces.

In November 2020, an affordable housing lottery launched for 86 of the property’s units, as reported by New York YIMBY.

The transaction is Square Mile’s first financing with Bruman Realty. The firm was drawn to the deal’s sponsorship as well as the fact that the product being delivered is close to completion, Lavipour said — giving the firm the ability to earn a little more given the asset’s pre-TCO status: “We like assets in the pre-completion stage as there’s more yield than there is with performing, stabilized assets.”

There’s been a buzz of activity in Downtown Brooklyn of late. Earlier this month, Savanna locked down $264 million in construction financing from PIMCO and CarVal Investors for its signature office-and-retail project at 141 Willoughby Street.

Also this month, Brookfield Property Partners announced it would sell its office condominium at 12 MetroTech Center to a joint venture between 60 Guilders and Davidson Kempner. The JV paid $130 million, in one of the largest office deals to close since the pandemic hit.