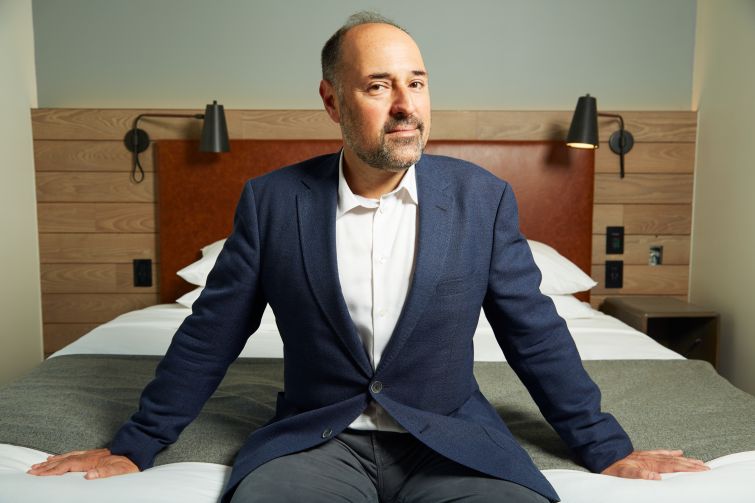 Mark Gordon sits on a bed at the Moxy Downtown, a millennial-focused hotel he recently developed in the Financial District. Photo: Yvonne Albinowski/For Commercial Observer

The owner of the 30-story Financial District Moxy Hotel is giving it back to lender AllianceBernstein, in a deal valuing the property’s ground lease at $108.8 million.

Tribeca Associates — led by Mark Gordon, Bill Brodsky and Elliott Ingerman —  transferred the ground lease to AllianceBernstein on April 29, according to public records filed on Monday, The Real Deal first reported. The developer first acquired the ground lease of the site in 2015 for $54.1 million and opened the Moxy hotel in 2018, aiming to give it a clubhouse vibe for millenials.

AllianceBernstein provided $105 million to Tribeca Associates to refinance its construction debt on the 143 Fulton Street hotel in 2018, Commercial Observer reported. The transaction, which closed July 31 of that year, included the assignment of roughly $61 million in previous construction debt from Bank of the Ozarks (now known as Bank OKZ) originated in 2016. It also included a new $44 million gap mortgage from AllianceBernstein.

The 298-room hotel, designed by SLCE Architects, was the second of the Moxy brand to open in New York City, following the Marriott-affiliated brand’s location in Times Square developed in partnership with the Lightstone Group. Lightstone and Marriott have four other Moxy outposts in the city, and are planning even more.

AllianceBernstein and Tribeca Associates did not immediately respond to requests for comment.

The Moxy NYC Downtown is not alone, with several other hotel owners returning a property to a lender during the pandemic.

The pandemic ended the longest bull run in commercial real estate’s history, making the market far more amicable for lenders than borrowers. The tangible impacts of that shift have been plain; the owner of Hilton Hotel in Times Square returned the property to one of its mortgage holders in January and Mack Real Estate took control of a seven-hotel portfolio through UCC foreclosure proceedings in March and last month.