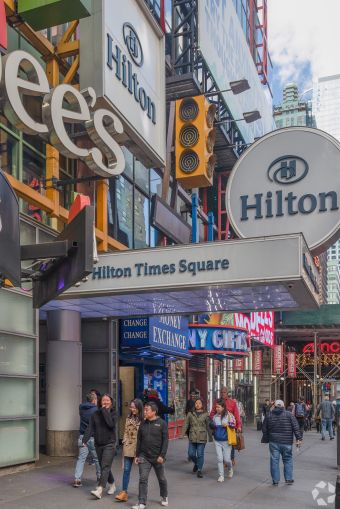 It looks like 2020 will end with another bit of bad news for New York City hospitality.

The lender behind a loan for the shuttered Hilton Times Square, which announced this fall that it was closing permanently, might take over the 44-story, 476-key property at 234 West 42nd Street.

That is per special servicer comments in early December that indicate that the “lender is actively negotiating a settlement agreement with the borrower that contemplates a deed-in-lieu of foreclosure for the collateral by end of year 2020, along with a settlement payment.” In a deed-in-lieu foreclosure, the borrower hands the asset to the lender. The hotel is backing a $75.795 million loan with the collateral ground lease interest, according to research firm Trepp, which also reported the special servicer comments.

Bank of America originated the loan. KeyBank National Association is the master servicer, and Torchlight Investors LLC is the special servicer. Sunstone Hotel Investors owns the Hilton Times Square. Sunstone and Torchlight did not return requests for comment. It’s unclear what might happen to the ground lease or to the hotel itself should Bank of America receive control.

“Settlement discussions with the borrower are ongoing,” Trepp’s research on the loan said (the last update from the research firm was dated Dec. 11). “Lender has used best efforts to obtain an appraisal, but has been unable to obtain a reliable valuation given the underlying issues around the ground lease.”

COVID has also complicated things, as it has for so many hotels around New York City. A few hotels have closed permanently, and others are operating with occupancy rates far, far below what they enjoyed pre-pandemic. In the case of the Hilton Times Square, occupancy went from north of 80 percent of rooms filled per night to under 5 percent.

On the financing side, too, things are dire. In November, nearly half of commercial mortgage-backed securities loans made against New York-area hotels were in special servicing, according to Trepp.

Compounding things further, dozens of hotel owners are facing a historic $500 million payout to displaced hospitality workers. That’s after an arbitrator reached a decision in November in a dispute between a trade association for owners and the New York Hotel and Motel Trades Council.

Sunstone made its last payment on the Hilton Times Square loan in April, and the loan was transferred to special servicing the month before. The owner announced via a WARN Act Notice that it was closing the 20-year-old inn permanently in October. According to Trepp, though, it’s still “operational.” Its phone line and website are no longer active, however.