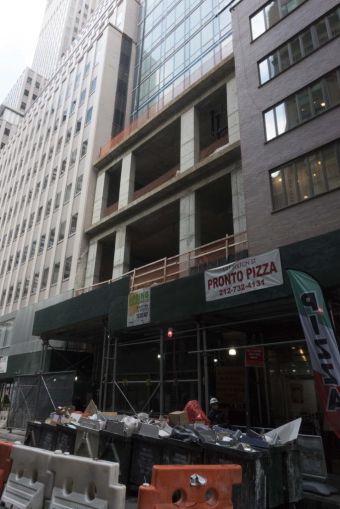 The base of 143 Fulton Street. Photo: PropertyShark

Tribeca Associates nabbed $105 million from global asset management firm AllianceBernstein to refinance its construction debt on the nearly completed Marriott International Moxy Hotel at 143 Fulton Street in the Financial District, according to records filed today with the New York City Department of Finance.

The transaction included the assignment of roughly $61 million in previous construction debt from Bank of the Ozarks in 2016, plus a new $44 million gap mortgage from AllianceBernstein, records show. The deal closed on July 31.

The 30-story, 298-room Moxy Hotel is nearly complete, with the final touches on the building’s exterior base currently underway, as New York YIMBY reported on August 1. The 364-foot-tall, 129,000-square-foot hotel was designed by SLCE Architects and is one of five Moxy’s slated for New York, including in Times Square, Chelsea, the East Village and the Lower East Side.

This Moxy sits on a through-block site facing both Ann and Fulton Streets, with the opening to the hotel’s lobby on Ann Street and the first two floors of its retail facing Fulton Street. It is situated between Broadway and Nassau Street.

Aside from the building’s first and second floor retail, the third floor contains a bar and communal space and the hotel portion starts on the fifth floor. The interiors were designed by Stonehill & Taylor, SLCE’s website shows.

A spokesman for Tribeca Associates was not immediately available for comment. An official at AllianceBernstein did not provide comment before publication.