URBN Playground Execs on ‘Hyper-Amenitization’ for the Workplace

Plus, they say the post-COVID office is increasingly becoming a recruitment tool 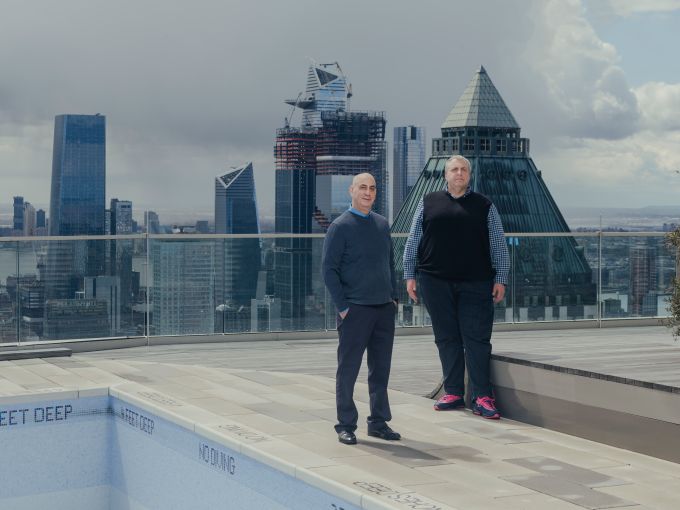 An entire industry has sprung up in the apparently never-ending search for sweeteners to make living or working in a building more fun and engaging.

One of those companies is URBN Playground, a Lower Manhattan-based amenity management consultancy, which also has offices in Los Angeles. It bills itself as “a full-service amenity management, consulting, technology and staffing firm” built on “our passion for putting the human touch into amenity management.” And it declares that its “manifesto” is “putting smiles on people’s faces.”

Indeed, after a standard photo of a three-story walk-up, the next picture on its website is of young people enjoying what look like mixed drinks.

URBN Playground started in May 2016, according to Jeremy Brutus, one of the firm’s co-founders, along with Amy Blitz. The website notes Brutus’ favorite song as “La La La” by Willy William and Blitz’s as “Putting on the Ritz” by Taco.

Brutus and Jay Shafran, the firm’s head of built design and program (favorite song “Mundian to Bach Ke” by Panjabi MC feat. Jay-Z) sat down for a Zoom call with the Commercial Observer earlier this month. Here are some of their observations on the post-COVID office environment, which have been edited for clarity and length.

Jeremy Brutus: My partner Amy and I started URBN Playground in 2016 after years in the industry providing luxury hospitality service, wellness services. And, basically, we really tried to transform the amenity business, which was really a grouping of numerous different providers who are catering to one thing: fitness, or conference, or food. We thought about merging them all together and building a technology platform for them to all, sort of, live together for the tenants in commercial buildings.

It really is a great experience for people to use our services, because they are so comprehensive. It really goes to something we felt, which was this convergence of typologies, between hotel and residential and commercial.

Jay, your title is head of built design and program. What does that mean in English?

Jay Shafran: I’m really in charge of the brick-and-mortar facilities and things. And I help develop the plan behind it. I help design those spaces. Where Jeremy tells me we need a fitness center for X number of people, I say, ‘OK, we need this size classroom, we need this many lockers, these many showers, these many sinks, this type of flooring; we’re going to do this with the lighting, this with the AC, and so on.’

So, basically, you’re responsible for taking the vision and turning it into reality?

Shafran: Right. At least from the built design. As Jeremy was describing, we’re looking at the convergence of the space operations and the technology. And there are a lot of people going all-in on putting in a conference center. For us, it’s all about: What is the experience for the end user of the building? Or, for the tenants of the building? The people who are signing the lease? We’re there to try to pull it all together.

Not only do we build the conference room, we work on the scheduling aspect of it. We do the programming on the back end. It’s all about tying in operations for the built space and the technology.

Give me, please, some examples of what you have done for a particular company and how that worked?

Shafran: We’re working on a couple of projects for Nightingale [Properties], one of which is 111 Wall Street, a 1 million-square-foot building in the Financial District, totally empty; they’re doing a gut renovation. We’re designing a large amenity floor and that includes a fitness center, a conference center, and a food-and-beverage side that we’re still working on. We’ll manage the app, but we’re coordinating it.

For this property, we’re creating a program specific to this property. It’s not always a matter of what URBN does. It’s a matter of what makes sense for the property. But we’re doing something there called “111 Well.” The idea for us is that we would coordinate with tenants in the building and help deliver a wellness program that coordinates with them, that gives a smaller tenant the ability to come into this space, a small- or mid-sized tenant, and help develop a wellness program.

It’s not only about the built space, but, to the extent that we have lawyers in the building and financial services, we will coordinate to deliver the wellness program. We’ll have the financial people come into this space and, in our conference center, deliver a monthly piece on elder care [and] how do we handle our parents?

Or, for financial services, talking about investment, investment for your kids and setting your kids up for the future. So, we are sort of pulling that together as a coordinated wellness program that they can either use our branding or their branding.

Brutus: One of the things here that is really important to mention is that when we talk about amenities on the office side, on the corporate side, is that there’s a social component to this that’s really, really vital that’s missing in a lot of different spots. That’s why people have flocked to what we’re doing here. We’ve added this social component, and a community component that people are wanting and missing. Especially now, with COVID going on.

Shafran: The idea is to attract tenants. Part of what we want to do is give the tenants a reason to be in this building that goes beyond the physical space. We’re helping them recruit employees.

Brutus: We see service as the next amenity. Even that name ‘playground’ gives you that sense of when you were a kid, or if you have kids — there are swings, a sandbox, there’s a lot of different things to do that make people happy.

The developer has a vision for what they want for the property, the architect has a vision. We circumnavigate that, and harmonize that, in a lot of ways. We see where architects are advising dishwashers in certain spaces, where they will never work, and we are able to advise accordingly.

We’re probably doing three times as many properties as we started a few years ago, well over 60, and we got a really big portfolio in the New York market. And we’ve expanded into Arizona, Texas, North Carolina and Georgia. We’re doing office amenity design there as well.

What do you see as the hot amenities right now?

We were doing this even before COVID hit: Rooms where you can go and use a bike, or a Peloton-type bike, in a private space by yourself. That was something that was very happening before COVID, and it just accelerated.

And we always talk about these spaces being Instagrammable. We want people to be able to say, ‘This is a cool place to work out.’ Whether it’s the graffiti or the art, or the bouldering that’s going to be taking place in Brooklyn for Nightingale. We want to be able to say something about who the people are in the property — making moments key.

Shafran: What we’re seeing happening is hyper-amenitization. We’re seeing places putting in amenities that didn’t feel like they needed to be putting in amenities before. Everybody is selling all the time, so whether it’s an employer recruiting talent, or whether it’s a building seeking tenants, there’s been this move to upgrading amenities throughout. People are going above and beyond trying to attract people. It’s something that we’ve seen on the residential side, and it’s just moving over to the commercial side now.

Brutus: Working together is personal. People miss going out for a lobster roll with their co-workers. They can’t get that in Topeka or Raleigh, necessarily, or maybe out in Oyster Bay, it’s not always available, you know? Experiences at the office are what people miss. That’s what we do, we provide personal experiences. Service is the next amenity. We believe that to our core.

Do you feel this is an unprecedented, important time for amenities? It seems like you hear more about amenities now than you ever did.

Shafran: And I think you’re going to hear more. It comes down to the fact that leaseholders’ employment requirement was super low and people were competing more for talent. And, as the American Jobs Act comes into play, you’re seeing more jobs than there are people to fill jobs. It’s not necessarily the people who are working in the Financial District, you’re still dealing with a finite number of people at the end of the day.

And people are going to be trying to attract more people. And the individual building is going to be forced to provide more amenities for tenants.

Blitz: The landscape has changed a lot in office, too, with regards to WeWork entering the space, and other people providing these services to people and making it really attractive to look at other places. This is a secondary factor that drives the amenitization of properties.

Shafran: The social aspect of everything has been on the rise. There’s been a lot of talk about how people are learning to work from home. Over the last couple of weeks, companies have started saying, ‘We’re going to bring people back to the office.’ Google announced that they’re going to bring people back to the office starting now and ‘we really want people in by September.’ And to take off some working days, you’ve really got to have permission to do it, and I think that’s going to be a harbinger for what everyone has been seeking.

After the 1918 Spanish flu, we had the Roaring ’20s, and we project there is likely to be another Roaring ’20s. People can’t wait to get back to the office. It used to be easy to walk to the next office to ask a question; now, you have to schedule a half-hour Zoom conversation.

The reality of this is that people are not going to be working from home, if they can help it.

Compare and contrast, if you will, the difference between amenities sought in residential versus those sought in offices. It seems that the amenity demand started in residential and branched into multiple types of properties.

Shafran: In a lot of cases, they are reducing sizes of apartments, and increasing amenities as a way of living. People go to sleep in their apartments and live in their buildings now. They often work in lounges, people who are working from home. A fitness center is a must-have for an apartment building now. The amenities that we deal with, that URBN deals with, tend to be package rooms.

Brutus: People want to live in a cool spot to party with their friends, and see a sunset, and go to the pool on the roof. In the office, it’s more a recruitment tool, it’s a way to collaborate. We might fix their iPhone screen in their office, and clean their apartment. We’re not going to clean someone’s personal space in their office, you know?

Shafran: One of the things we’re designing into apartment buildings is office spaces. Individual offices that people can use, conference spaces. A large part of our economy is the gig economy. So, there are a lot of people who are working from home, so we’re creating those spaces. Business centers, those we don’t do anymore.

People are connected all the time. There isn’t a time where you’re not working. If you’re on your smartphone, you’re checking your email at all times. And you’re also socializing at work.