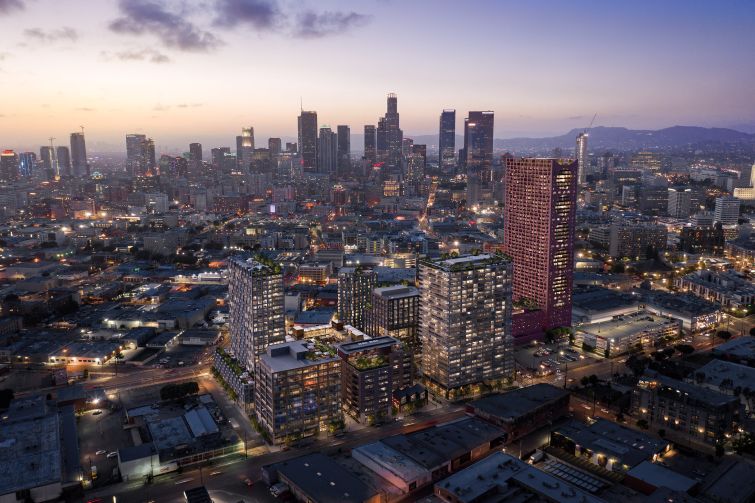 Denver-based developer Continuum Partners submitted a development application today for a $1.5 to $2 billion mixed-use development in Los Angeles’ Arts District. The blockbuster project would pave the way for 401,000 square feet of office space, a hotel, around 1,500 residential units and retail space, according to information from the developers.

The development would replace Los Angeles Cold Storage Co’s 7.6 acre facility on the site, and Continuum is partnering with the cold storage company on the project, according to the LA Times, which first broke news of the development. The project will be financed by private investment, and the terms of the two companies’ partnership were not disclosed.

L.A.’s Arts District, located on the eastern edge of Downtown, has been a magnet for development with projects ranging from Soho House to a Related Companies-backed office development.

“We are very bullish about the future of Los Angeles, particularly Downtown,” said Mark Falcone, CEO and founder of Continuum Partners, in prepared remarks. “Our team is especially looking forward to being part of the massive transit infrastructure coming to DTLA, which will reshape the entire region over the next 20 years and help LA lead the nation towards a more equitable 21st century city.”

The company hopes to break ground on the project, dubbed “Fourth & Central,” in 2024. If approved by the city, the project would include ten buildings, paving the way for a 42-story residential skyscraper, a 68-room hotel, retail space and office space targeted at attracting firms in the creative fields, like technology and entertainment, that are increasingly drawn to the Arts District.

It is designed to be a walkable, bikeable area crafted by Los Angeles-based Studio One Eleven, with two marquee buildings designed by David Adjaye, an architect best known for the National Museum of African American History & Culture in Washington, DC.

The residential tower would hold 572 condominiums and 949 apartments, about 14 percent of which, or 216 units, would be designated as affordable. Some of the units will be live-work lofts as well.

The proposed office space comes after nearly a quarter of LA’s office space is empty — the highest level since 2009, Commercial Observer reported.

The development is Continuum Partner’s fourth in the district, after recently completing a creative office building, called Produce LA, and with two additional proposals in the planning phase. One proposal is for a 185,000-square-foot office tower next door on Mesquit Street, according to The Real Deal.