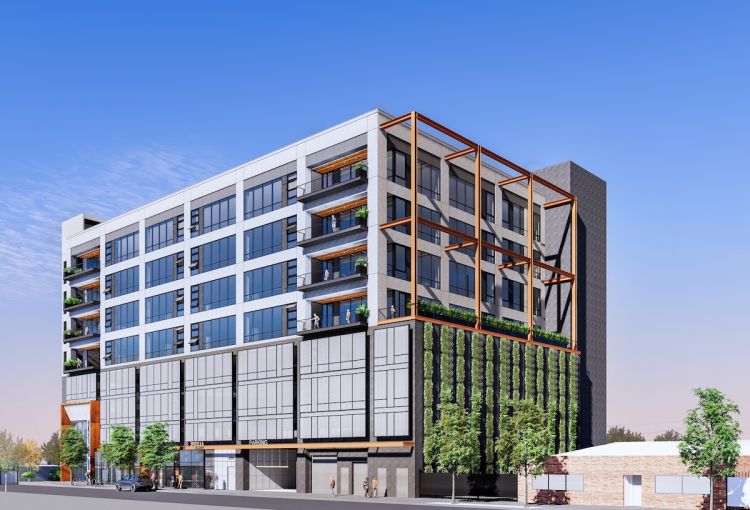 The nine-story development at 2130 Violet Street, is expected to be complete by early 2022. rendering: Ware Malcomb

The new JV also announced that crews broke ground this week on the nine-story development at 2130 Violet Street, between Santa Fe Avenue and the L.A. River. They expect the project to be complete by early 2022.

The building will include four floors of office space with 27,000-square-foot plates, as well as four levels of parking with 275 spaces, and about 3,400 square feet of ground floor retail.

Property records show that Lowe purchased the lot for $5 million in June 2015. The project has been in planning and pre-development since 2017. Architect firm Ware Malcomb designed the building, while Swinerton is the general contractor.

The joint venture was brokered by Todd Tydlaska and Mike Caprio of CBRE, and Mike Condon of Cushman & Wakefield. Condon, Pete Collins, Scott Menkus, and Brittany Winn of C&W will manage leasing.

The Arts District has been transforming for years from an unknown warehouse district a decade ago into one of the most sought-after submarkets in L.A. The commercial real estate boom expanded the area with residential development and adaptive reuse projects. The submarket is also a federally designated opportunity zone, which allows investors to defer capital gains taxes should they invest in real estate.

L.A.-based Lowe currently has more than $2 billion in commercial real estate projects in the pipeline or under development.