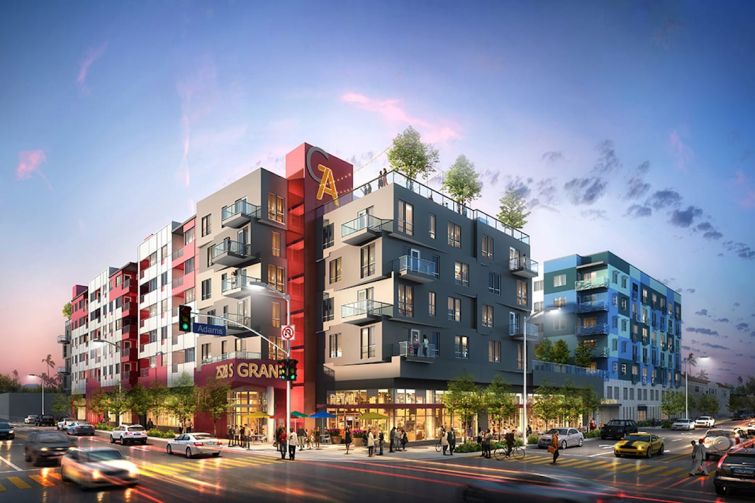 Togawa Smith Martin designed the project, which is located about a half-mile from USC and Exposition Park. rendering courtesy of JLL

Development firm Cityview is building the $125 million project with 296 units, including 25 units designated for low-income tenants. Construction is expected to be complete in mid-2023, according to the JLL Capital Markets team, which announced the financing. It’s the first transaction between ACORE and Cityview.

The seven-story Adams & Grand building will rise at 2528 South Grand Avenue in the Historic South-Central L.A. neighborhood, between the University of Southern California and Downtown L.A. The site is also located in one of California’s federally designated opportunity zones, which allow investors to defer taxes on capital gains for investing long term in blighted areas earmarked for development. Additional funding for the project was provided by an opportunity zone program managed by The Townsend Group.

Togawa Smith Martin designed the project, which is located about a half-mile from USC and Exposition Park. Amenities will include a two-story clubroom, a business center, two sky decks, a yoga studio, a fitness center, swimming pools, a dog spa and more.

L.A. remains one of the least affordable housing markets in the country, according to JLL’s recent economic update. It’s second only to San Francisco.

While the pandemic changed the nature of the demand for apartments, multifamily development is still expected to grow in California this year as the economy rebounds, according to the Allen Matkins/UCLA Anderson Forecast, which is a survey of commercial developers and financiers. Other than industrial, multifamily is currently the most attractive asset class, according to David Blackwell, a partner at Allen Matkins.

“The state’s chronic housing shortage persists, and the pandemic has had little impact upon it,” Blackwell said in a statement. “The state Legislature has been pushing pro-housing legislation for the last few years, and continues to do so. Even though the results are mixed, Sacramento is trying to make multifamily development, particularly in transit-rich areas, more streamlined and less exposed to roadblocks created by local agencies and their anti-development constituents.”