Whoever Wins the Presidency, It Won’t Really Affect Returns on Commercial Real Estate

It's the economy, you know what

RED AND BLUE AND BULLISH: “There will be a lag between the election result and the impact on property, but it will be important to ‘follow the money’ to identify potential opportunities or risks,” a Cushman & Wakefield report said of the 2020 presidential race. Photo: JIM WATSON, SAUL LOEB/AFP via Getty Images)

That’s according to a recent Cushman & Wakefield report, which dives back to the late 1970s to show that returns on investment for institutional investors in commercial real estate tend to do well under both Republican and Democratic administrations.

The report analyzed data from the National Council of Real Estate Investment Fiduciaries Property Index (NCREIF NPI), which institutional investors in the U.S. use to gauge the performance of commercial estate. Think of it as a guide for deciding what will be a good investment and what won’t. It turns out that the NPI pretty much thrives, or close to it, no matter who is in the White House.

“Property has performed well under both parties,” according to the Cushman & Wakefield report, which was authored by in-house economists Kenneth McCarthy and Kevin Thorpe. “Since 1979, NCREIF property index returns have averaged better than 8.5 percent annually under various Democratic and Republican administrations.”

In fact, returns on investment tend to be more about the overall economy than the occupant of 1600 Pennsylvania Avenue.

A president can affect the cause of and recovery from such recessions, but it’s the downturns themselves that impact investment return. 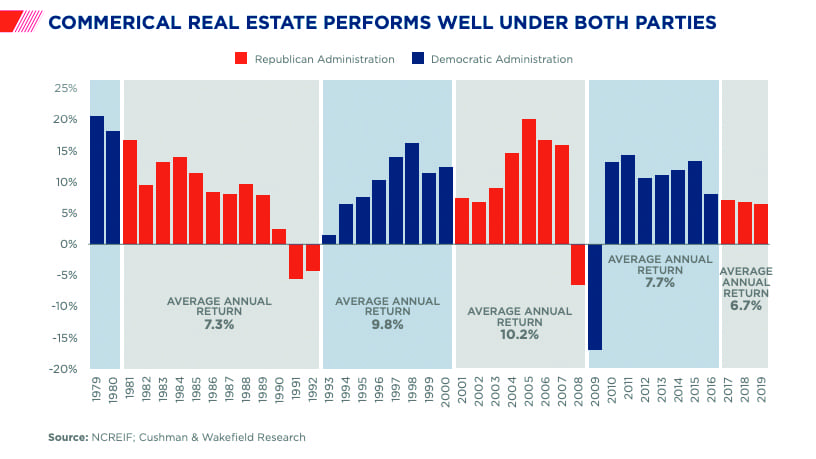 To be clear, it could very much matter who is the next president when it comes to how and whether to invest at all in commercial real estate, whatever the returns.

Former Vice President Joe Biden, for instance, has said he would tweak existing 1031 exchange rules. The like-kind exchanges allow investors selling a property to defer capital gains taxes if they put the money from the sale into another property. Unsurprisingly, the exchanges are quite popular with real estate investors. Biden’s plan would limit their use to people pulling in less than $400,000 annually. His administration would then use the money from taxes on those making more to help pay for a $775 billion plan for child and senior care for 10 years.

Then, there are opportunity zones, a signature of the Trump-backed federal tax overhaul in 2017 designed to foster investment in supposedly blighted areas. The program permits investors to defer taxes on capital gains that are invested in a qualified opportunity zone fund until Dec. 31, 2026. As long as the investment is held for seven years, only 85 percent of gains in such a fund are subject to tax. Held for a decade, and any new gains are tax-free.

Unsurprisingly here as well, investors have cottoned to OZs and the president often touts their effectiveness at fostering investment in blighted areas. But some have criticized the program as falling short of its goal of encouraging the sort of long-term investment that revives communities economically, and that some investment only furthers the sort of gentrification that then displaces longtime residents. In other words, critics say the OZs reward investors but not necessarily the zones themselves.

Biden has said he would reform the OZ program, though it’s unclear exactly how. According to his campaign website, the reforms would include requiring investors “to provide detailed reporting and public disclosure on their opportunity zone investments and the impact on local residents.” The reforms would also direct the Treasury Department to more closely parse which areas are declared opportunity zones. Trump has said he would continue the OZ program as is.

These are examples of vehicles of investment in commercial real estate. As for returns on investment, again, the election’s outcome doesn’t matter as much as other factors. Though who is president can certainly play a role in how these factors unfold. That includes the federal government’s response to the coronavirus pandemic that has gummed up so much economic activity, including in various commercial real estate sectors, such as hotels, brick-and-mortar retail and offices.

Clarity on these factors will come, including clarity regarding a second federal stimulus package to further jumpstart economic activity, according to the Cushman & Wakefield report. Meanwhile, all most investors can do is wait as the electioneering fog lifts.

“Rather than elections,” the Cushman & Wakefield report said, “the real estate cycle, the economy, interest rates, COVID-19, geopolitical events, and long-term growth drivers (like demographics and technological change) are the areas to focus on in determining leasing fundamentals and property values.”